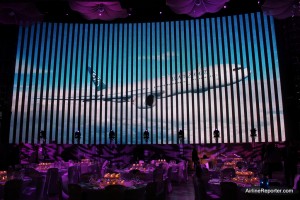 Dinner hosted at the Experience Music Project in downtown Seattle the night before the delivery.

Air New Zealand’s first Boeing 777-300ER was recently delivered to the airline, then flown to Los Angeles before heading to Auckland. Being able to show off the new interior was quite exciting. This was a huge deal for Air New Zealand, Boeing and airline geeks around the world. Boeing and Air New Zealand worked hard to make sure the hand over was not a small celebration and I wanted to share what happens behind-the-scenes on a VIP aircraft delivery.

The event really started the day before the delivery. Boeing employees, Air New Zealand guests, the media and other VIP’s were invited to take a special tour of the Boeing factory and attend a celebratory dinner. Due to scheduling I had to choose to either take a tour of the factory (which I have done quite a bit previously) or take a ride down to LAX on the new plane. Needless to say, I didn’t make the tour.

After the factory tour, people were invited to dinner, which was hosted at the Experience Music Project and Science Fiction Museum in downtown Seattle. The dinner was quite the fancy affair. “The venue – Experimental Music Project (EMP) was a good fit for the delivery dinner as it followed ANZ ‘s branding of clean, modern, sleek, technologically advanced and fun as well as all the lighting etc that are part of their new interior and product,” Linda Lee with Boeing International Communications explained to me.

Everyone was in business suits and fancy h’orderves and drinks were being served when I arrived. Although we had free access to roam the facility, I decided to stay and talk with Air New Zealand and Boeing folks. We were housed in a very large room with a huge LED wall with an Air New Zealand Boeing 777-300ER displayed on the wall. On either side was a projected Air New Zealand logo and on the other a Boeing logo. The purple hue of the lights really matched the feeling of the inside of Air New Zealand’s new 777-300ER. 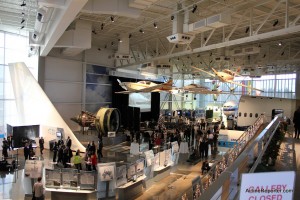 The Future of Flight’s Gallery was closed off for the delivery celebration. Where you see the projector screen were the large doors that opened to reveal the new 777-300ER (click for larger).

After things calmed down we all sat in our assigned seats. Sitting on one side of me was Andrew Baker who is the Cultural and Customer Ambassador and on the other was David Wilson who is the Boeing 777 Deputy Fleet Manager and was one of the pilots taking the new 777 to Auckland. Cool. I care very little about celebrities on TV or in movies. For me, these people are celebrities. It was wonderful speaking with them and the rest of the guests at the table about airlines, airplanes and the whole business.

Jeremy Dwyer-Lindgren of NYCAviation, who was also covering the event, pointed out that he enjoyed how Air New Zealand set up the seating. “Air New Zealand peppered in more than just the communications staff at the media tables.  We had David, the first officer, and Chris, one of the premium cabin flight attendants at our table among others.  To get their perspectives and pick their brains provided a much more frank and real discussion; one you may not have had at a table with only communications staff parroting talking points.” Oh yes, the food was not too shabby either.

What kind of dinner would it be with out those special speeches? There was a lot of thanks and appreciation that was shared between both companies and it was all well deserved. Although the dinner was a very fun and informational event, one couldn’t help but be excited about actually seeing the plane the next day.

Being December in Seattle, I was expecting rain. The airline-delivery gods were smiling on us and gave us one beautiful day. Our flight was scheduled to leave from Paine Field at 3pm, but were asked to show up at the Future of Flight by 10am. I really didn’t know the full plan for the day and I was totally fine with that. I knew I was there at 10am, plane was leaving at 3pm and I had my return flight back to Seattle. Everything else was going to be an adventure. 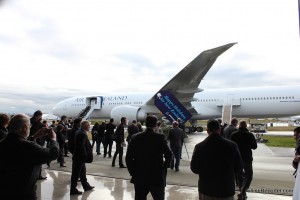 Going outside to check out Air New Zealand’s Boeing 777-300ER for the first time.

When most airplanes are delivered to an airline there isn’t a huge ceremony. On the east side of the airport, Boeing has a building where the airline’s crew will show up, some paperwork is signed and the aircraft is flown off. Actually during the ceremony, two other airlines took delivery of other Boeing 777-300ERs: Qatar and Turkish Airlines with little fanfare. But with certain milestones, airlines like to make a little bigger deal about their delivery. “Events and deliveries vary based on the airline customer i.e. Is it a first of model, milestone delivery, participation and attendance levels etc.  This obviously was a large event as it was ANZ’s First 777-300ER and the world introduction of their new interior and branding,”  Lee stated.

On the Future of Flight’s gallery floor there was a large stage and chairs set up. The gallery was closed to the general public during this event, but it provides one heck of a backdrop for celebrating an airplane. After some more speeches and some paperwork signed, Boeing handed over the keys — literally. Now, the keys aren’t used to actually start the plane, but I was told they do access the cockpit door. At this point, the airplane is no longer Boeing’s and belongs to the airline (well the bank I guess). After the handshakes and big smiles, the large hangar doors opened to show the shiny new Boeing 777-300ER.

Since this was a few days before Christmas (er, non-denominational holiday time-frame) there was a Santa and two elves dancing around the plane with a big sign that read “Happy Holiday Air NewZealand!” I got too caught up looking at the new plane, others caught something a bit more touching. “Another correspondent working the event noted that he saw a few welled up eyes on the team as the doors pulled back ’“ and I’m not surprised.” Dwyer-Lindgren explained to me. “To be able to share in that excitement and witness the deep pride they felt for their company and their plane was really something special.” The event was more than just getting a new airplane. 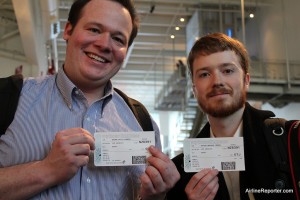 Jeremy Dwyer-Lindgren (with NYC Aviation) and I show off our boarding passes before getting on board at Paine Field.

Before any of us could take a look inside, Mr. Baker, in traditional garb, blessed the aircraft. Then it was finally time: checking out the inside. Since my blog about the interior already goes over that part of the event, I will skip it on this one. After we all had our tour, it was back into the Future of Flight’s gallery for some food and networking while we waited for the aircraft to be prepared for flight. This was a good time for most media-types to start writing out stories and checking the photos they took.

Then it was time to re-board the airplane, but in a very different way. Instead of going out the hangar doors and up onto the plane, we all went through a mini-security screening, being wanded and having our bags searched. Before getting to the security screening, we received our boarding passes. Now you know you might be an airline geek if getting a boarding pass from Paine Field to LAX gives you a huge smile. Dwyer-Lindgren explains it best, “I got the sense that all the media on board realized that this ticket was something unique and special’¦but it was us aviation nuts who appreciated it the most.  To have a ticket that actually reads Paine Field’¦for a domestic flight on an international airline on a brand-spanking new 777-300ER (there are no US airlines who currently utilize them)’¦was just so unique.  So yes, it was [censored] AWESOME.”

Then it was up on to the plane and time to take our seats. Let’s see, row 7, seat J, that sounds like it might be near the front of the plane and it sure was. Air New Zealand had allowed the media and their guests to try out the seats up front while they sat in Economy Plus (which weren’t too shabby either). 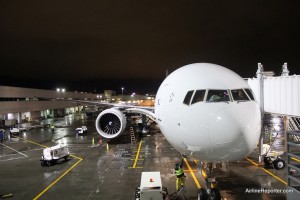 Having to leave the new Boeing 777-300ER at LAX was difficult, especially knowing she was on her way to Auckland.

Taking off in a Boeing 777-300ER, which is about 1/4 full, is a unique experience. I can tell you that we didn’t take up too much of the runway before going airborne. Being a part of a flight with only media, Boeing and airline folks is a fun ride. Easy going atmosphere, cheering during take off and great conversations. I almost wish more flying experiences could be like that.

Unfortunately the flight was short. In less than three hours we were lining up to land at LAX. For a good chunk of people on board, they were heading on to Auckland, but since it was only a few days before Christmas, I had to get off and take a flight right back to Seattle. It was not easy going from my super luxurious seat on the Air New Zealand 777-300ER to my normal economy seat heading back to Seattle.

The delivery of this aircraft was a big deal and both Boeing and Air New Zealand did it right. Although it takes a lot of work from people on both sides to make an event like this happen, it is great to remind people why they are in this business. Where most deliveries will just be pilots coming to pick up the plane with little show, others, will get a much larger and well deserved celebration.

If you missed it earlier, Air New Zealand is having a contest until Valentine’s Day to allow you to win a free trip to New Zealand or England in Cuddle Class.

A sleek powershot digital camera will take amazing photos each time you travel.

Great coverage, David. Thanks. It was great having you here for the delivery event. Come back soon!

Great story. Perhaps a silly question: how is it that a non-US airline is able to issue tickets to carry passengers (like you) solely within the US? Was the boarding pass just a nice souvenir but this was technically a charter?

Hey Doug, that was a really good question. I wasn’t fully sure, so I asked ANZ and they told me:

“We got special clearance for a chartered flight, since we don”t flight domestically in the US.”

So you are right, it was a charter.

This is a bit confusing to me, as here in New Zealand, ANZ is the name of a big bank. We always abbreviate our airline as “Air NZ”.

Perhaps this is a silly question, but I’ve always been curious how planes with shorter range delivered? ANZ and Qantas, for example, both have large 737 shorthaul fleets. Do they just island hop their way across the Pacific after getting picked up here?

I’m assuming that is how the get them to their location. In fact, that’s what many commercial airlines do as well. If the aircraft they are flying has a shorter distance, they’ll make fuel stops before arriving to their destination.