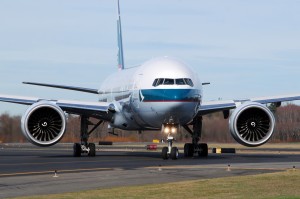 Where in the world do you want to go on Cathay Pacific?

When first hearing about this contest, I had to read the details a few times to make sure I fully understood. I have promoted a few contests from airlines before on the blog, but this one takes the cake. Where some contests might give you a free flight or two, this one from Cathay Pacific will let you fly around the world for 80-days.

That’s right. You get unlimited economy class tickets from Hong Kong to any Cathay Pacific or Drangonair destination for 80-days. You also get 4-days and 3-nights hotel accommodation for every location you travel to and about $350.00 spending money per day.

Of course you will have to put in a little work to win a prize like this. You need to submit either a 30-60 second video, photos or a story that shares, “where in the world would you go in 80-days?” The contest ends on March 6th and on April 12th, 8 finalists will be flown to Hong Kong to compete in a one-day challenge to see who will win the grand prize.

This is probably the biggest and best prize I have seen from a contest hosted by an airline. Surely it is a worth a short video for a chance to travel around the world for 80-days. Game on and good luck!

I know the competition is over but I am curious about something. In the photo above of the B777 the aircraft appears to be taxiing with its RAT (Ram Air Turbine) down – something that normally only deploys in a sudden loss of power on board the aircraft. – if you are not sure what I am referring to look for the little propeller under the rear fuselage.
Does anyone have data on this photo?

The photo was taken at Paine Field, where the plane was manufactured. I am sure it was a test that they were running.