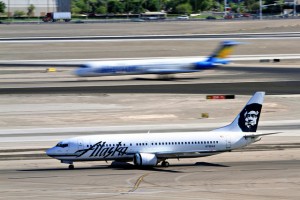 Who doesn’t want more flights to Hawaii? Alaska Airlines recently announced they will be starting service from Bellingham (located about 1.5hrs north of Seattle right by the Canadian border) to Honolulu starting January 7th.

The fact that Alaska is continuing to expand their flights to Hawaii is not surprising, but opening a route that most people assume Allegiant will be soon using their new Boeing 757’s on is interesting.

As Dan Webb points out on his blog, Alaska’s press release points out they have amenities included in their basic fares, which seems to be comparing them to another airline that does not, presumably Allegiant.

I wrote to Allegiant to see if they have a comment about Alaska announcement and not surprisingly they did not since Allegiant has been pretty tight-lipped about their future plans. I also spoke with Bobbie Eagen, with Alaska Communications, to see if this move is directed towards the possibility of Allegiant flying the same route and she told me, “The new Bellingham-Honolulu service is a natural progression of Alaska’s Hawaiian expansion,” she continued, “There’s great demand from customers living in Bellingham and the Lower Mainland and adding nonstop service to Honolulu, one of our most popular vacation destinations, made sense.”

Either way, competition is always good for the customer and watching a little airline route battle is good for us airline nerds…Game on!

While this move by Alaska may be somewhat pre-emptive toward Allegiant, it may also reflect the fact that Alaska has decided that the best way for it to serve the Vancouver market is from Bellingham. Alaska has reduced flight frequences and eliminated many routes from Vancouver – perhaps because costs there are high. Maybe this portends a greater expansion of service from Bellingham to attract more Vancouver and Lower BC business. If Alaska starts offering daily service to LAX, LAS, SFO and PHX that would validate the strategy.

Thanks for your comment. Yea, I don’t really see people sitting around at Alaska asking, “how can we directly compete with Allegiant?” but more of this is where they want to go, just so happens another airline is very likely to fly the same route, so preparing for that competition is a good thing.

Furthermore, the Hawaii trips currently served by WestJet and Air Canada out of Vancouver have become extremely popular with British Columbians. I wouldn’t be surprised if Alaska is trying to bring more competition to Canadian airlines by offering lower fares, even if it’s a different airport. I have no doubt that Alaska is doing this to tap into a huge Canadian market for Hawaiian trips.

Allegiant is touting the fact they they might be offering a 757 to HNL. Frankly, I don’t see any great benefit to this over a “stretched” 737. They both have the same interior diameter and seating layout, single aisle; both have two engines; both obviously have the range. So the 57 is a little longer; so what. I’ll stay with Alaska and get the miles.

Alaska all the way!

I know this has been pounded into the ground, but does anyone else get a little nervous when you hear them flying daily to Hawaii? They don’t even fly daily to LAS and to offer it every day to Hawaii they seem confident that there will be butts in those seats (and not just nonrevs)