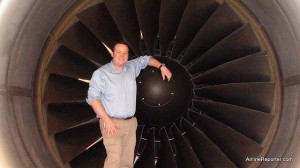 Me during my first visit to the Future of Flight. Since then, I have probably been about 25+ times.

When I was still new at this blogging game, I decided to set up a visit with the Future of Flight. It was the first time I was going to some place like a museum (because they aren’t a museum) to review for the blog and I was a bit nervous. However, my nerves quickly turned to excitement after seeing all the cool things they had and meeting Sandy and Ed. I was also able to have an amazing conversation with Barry who is the Director. He is a true aviation enthsiust and quite the AvGeek (that is a compliment).

Since then the Future of Flight has become the social media aviation headquarters of the Seattle area. Hosting Aviation Geekfest in 2009 and 2010 and always being supportive of those on Twitter and bloggers. Today they are celebrating their fifth anniversary since they opened in 2005. Since then they have seen more than 850,000 visitors from 175 different countries. They continue to grow the exhibits they have and share their passion of aviation with other enthsists and of course the next generation.

To celebrate, you can enjoy what they have to offer for only $5 admission, which includes the Future of Flight gallery and Boeing Factory tour for today only. If you haven’t been before, this is a great time to check it out. If you have already been, why not go again?

A special thanks to the Future of Flight for all that they do and a very happy five years!