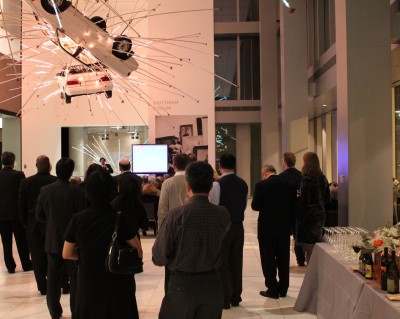 Invited VIP Delta guests at the Seattle Art Museum. Yes, those are Ford Taurusi hanging from the ceiling.

After 9/11 airlines weren’t doing so hot. When the money was rolling in, airlines made a real effort to take care of their VIP customers. When flying demand goes down, airlines declare bankruptcy, mergers happen and the price of oil goes up, sometimes airlines can become distracted. Many airlines used to make an extra effort for their passengers, but had to cut back due to funding. Now, airlines are starting to make money again, and starting to concentrate more on the customer.

Delta Air Lines is one airline that isn’t doing too shabby right now. After the merger with Northwest Airlines they were the world’s largest airlines, until United and Continental stole that title away. But that didn’t stop Delta from making some decent money in extra fees. Through the end of the third quarter of this year, Delta has made $1.26billion (that is with a “B”) on bag and change fees. Just in the third quarter alone, Delta made $363million overall. Compare that to losing $161million last year. Now that Delta is making money and doesn’t have to concentrate on the merger anymore, they can put their focus back on the most important part of the equation: the customer.

So how does Seattle play into this? Last night Delta held an exclusive Picasso event at the Seattle Arts Museum (called SAM here) for VIP passengers, booking agents and other invited guests. Delta wants to show how important Seattle is to them and how they want to continue to grow loyal customers.

Before the Northwest merger, Delta didn’t have a huge presence. However, adding Northwest’s routes to Asia and having a vast domestic network in the US, provides many Seattle locals and folks flying through with more options. Seattle is a big international hub for Delta. After JFK and Atlanta, Seattle offers the [there is discussion going on right now. It might be fourth with Detroit third] than any other US city that Delta flies. The airline has a staff of 1500 employees based in Seattle and are in the process of remodeling their SkyClub at Seattle-Tacoma International Airport (SEA).  Delta hopes to have their new SkyClub open to the public sometime during the first quarter of 2011.

Although the speeches by Delta at last night’s event were short, they did make sure to mention their appreciation of Alaska Airlines more than once. While Delta is building a great international presence out of Seattle, they rely heavily on their relationship with Alaska and their domestic, west coast network.

This year, Delta added flights to Osaka and Beijing from Seattle. During the summer they plan to increase non-stop flights to Amsterdam from 10 weekly to 14. I wouldn’t be surprised if we see more international flights coming out of Seattle in the future. One thing that Delta knows is an issue is their outdated aircraft interiors on most of their Seattle international flights. Some are flown with Delta’s Boeing 767-300ER’s and others with Northwest Airbus A330’s. Delta assures us that all the interiors will be updated by 2012.

This event will be one of many that Delta hopes to have around the country. They are sponsoring the Picasso exhibit that is currently in Seattle, which eventually will be making other visits around the US. I hope to see more events like this around the country from other airlines as well. I think making those VIP customers feel a bit more VIP is a good way to continue to see loyal customers continue to fly one particular airline.

Any word on upgrades/updates to the Delta SkyClub in Seattle?

They are in process now and should be done mid-end 1st quarter 2011. I am excited to see how it turns out.

Hmm, there were there helping to promote Air France as well. I would very much hate to see Air France’s A340 not come to SEA anymore.

We love our friends at SEA, and we’re very excited to share the honor of hosting Delta’s international growth with them! But… DTW is actually Delta’s third-busiest international gateway.

Yea, been having some issues with that fact. I was told by Delta that SEA has the third most international destinations, but looks like DTW holds that as well. I think SEA might be fourth, but trying to clarify.

With 213 weekly international flights, MSP is EASILY the fourth busiest international gateway for Delta. I think Daniel (below) might be correct — perhaps they meant to suggest that SEA was Delta’s third-busiest Asian gateway (behind DTW and NRT). That’s about the only thing I can figure that puts SEA in the third-place spot for anything related to Delta and international flights.

This might be the first time I’ve heard someone call SEA a Delta hub. I never thought of it that way even though it is so similar to the hubs of AMS and CDG with AS being similar to AF and KL.

I think they meant Seattle is Delta’s third largest transpacific gateway behind NRT (ATL,DTW,HNL,LAX,MSP,JFK,PDX,SLC,SFO,SEA) and DTW (ICN,HND,HKG,NRT,NGO,PVG). Los Angeles has HND,NRT,SYD and Seattle has KIX,NRT,PEK. Atlanta is 5th with NRT and PVG.

I don’t think there’s any doubt that Delta has Alaska directly in their sights. Just give them three to five years to announce that merger.