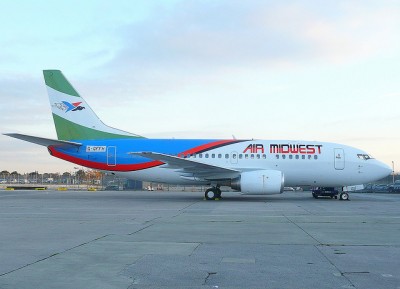 Orange was the only color not already used! 🙂

Looks like it’s been thrown together from various airlines/aircraft!

What’s even more interesting is that the banner on their homepage shows a 737-200. Site itself looks like it was made from software out of a box.

A Pac-Man eating a dolphin? Or maybe someone on a phishing expedition chewing up your bank account?

Considering the dismal safety record of Nigerian airlines, I’m in no hurry to fly them.

I wonder what the interior color scheme is? (I’m leaning on terrible)

Yeah, the lesson learned from this is not to try to mix the white or colorful plane themes. One or the other. Not both.

Perhaps they did ask for help with the design and everyone’s Nigerian spam filters blocked it. Mine would.

At least they’re probably at much less risk of a mid-air collision. That clash of colors will be visible to other pilots under all lighting conditions.

I have to give them credit though for using the trusty, but less common -500 series of the 737. Perhaps they got them from Continental. It is eye-catching. Good press or bad press, its still PR attention!

Not as bad as Southwest!