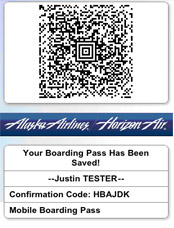 Example of an Alaska Airlines boarding pass on a mobile phone. Photo from AlaskaAir

I love technology and am excited when new gadgets come out that help passengers. When the e-podiums and checking in online were an option, I was one of the first to use them. However, there is one piece of technology I haven’t been so quick to start using: electronic boarding passes. Although the technology has been around for a while, I have been avoiding using it. It wasn’t that I didn’t trust the technology, I didn’t trust the training of the people who had to scan it.

On a recent Alaska Airlines flight from Los Angeles (LAX) to Seattle (SEA) I decided to give it a shot. Did it work? Well I made it on the plane, but I am going to go with “no.” Getting the mobile boarding pass was pretty easy using Alaska’s iPhone app. Checked in and had my boarding bar code on my phone to use with security and the gate agent.

Since security was up an escalator in my terminal at LAX a TSA employee was there to check my boarding pass at the bottom of the escalator and another at the top before actually being screened.  The first TSA guy just kind of looked at my phone, and said go ahead. He looked confused, but maybe because he was only looking at the bar code. He didn’t look at my name or flight information since you have to scroll down on my phone to see that.

I got to the second TSA person and you could tell she wasn’t happy I was holding my phone. With a big sigh she picked up the scanner, turned it on and “beep” scanned my phone. This process took about three times longer than if she just looked at my paper ticket, stamped it and let me proceed. However faking a paper boarding pass is quite easy — not as easy as faking a bar code.

Next was the tricky part. It was boarding time and the gate agent needed to scan my electronic boarding pass. I held out my phone and without hesitation she told me that my phone wouldn’t scan and I needed to go get a boarding pass. Now I had a dilemma. I could give up, keep the line moving and get a paper boarding pass at the gate or do my best to get on board with my phone’s while annoying the passengers in line behind me. Since I knew I would be writing up a blog on this, I wanted to get on the plane with my phone (sorry to the people behind me, but we still left 15min early).

I spoke with Alaska Airlines about my experience and Jeff Butler, Alaska’s vice president of customer service-airports explained to me, “Our experience rolling out the e-boarding pass hasn’t been unlike other carriers using the same technology – we’ve had mixed success but we’ve learned a lot. About 1,500 people use the e-boarding pass each month and we’ve heard positive feedback and also see areas for improvement.” Talking about my issue I ran into, Butler told me, “The particular issue you had scanning the boarding pass should be resolved by the end of the year. In the coming year, we will be upgrading our gate scanners which will improve the scanning of the boarding pass and we are already looking at ways to improve the user functionality.”

I have been hearing similar stories from other travelers, but it is nice to see that Alaska knows there are some issues and are working to resolve them. Thing is, I have no doubt e-boarding passes will be the future. Although I didn’t have the best experience, I will keep trying and I suggest you do as well. The more we do it, the more airlines will learn from issues. Just remember to have a back up boarding pass in your pocket, at least for the time being.

Interesting that you experienced so many hiccups. I’ve used e-boarding passes on an iPhone multiple times on United and a couple times on Alaska (LAX, BWI, SEA, ORD, SNA…), and have not had any problems for quite a while. Sure beats scrambling to find a printer when it’s time to fly back home. (I try to avoid waiting to use the kiosk at the airport)

I was quite surprised to run into so many issues as well. I think I ended up running into every issue possible. You are right though. I had just flown in from out of the country and realized I didn’t have a boarding pass. Instead of waiting in line to get one, I was just able to get my boarding pass from my phone and go. Like I said, this is for sure the future.

Sorry to hear about your experience. The week before last I flew United MCI-ORD-MCI with passes on my iPhone 4. It worked well both with TSA and the boarding agent. At ORD the TSA stand even had a self-serve type scanner, which was nice since I wasn’t too fond of handing over a $700 phone to a stranger wearing gloves. Accidents do happen, dontcha know. After I scanned my phone the agent looked at her display which showed my name and other data, she compared it with my DL and sent me on my way.

I will say I’m a bit disappointed that I didn’t have boarding passes to add to my box of travel junk though. Maybe next time I’ll take screen shots 🙂

I know our Delta scanners will scan the phone but they scan anything from a skymiles card to your boarding pass used on your outbound trip 3 weeks ago.

I really love the idea of electronic boarding passes. You can have the people who show up right at check-in cutoff go straight to the gate instead of waiting in line to talk to someone to find out it’s too late so you have to pay to get on a later flight. I really hope it improves.

Yeah I was gonna post that Delta seemed to have these on the lockdown. I love using electronic boarding passes and it is so seamless at SLC…not the same experience with AS in SEA however.

This was a great piece to read, especially since I will be taking an Alaska Airlines international flight on Sunday. I will download the app and try the electronic boarding pass experience.

I think that this will work. It will cost less money because they don’t have to spend it on the paper and also the salaries, which is in a way a bad thing for the economy but airlines need to also survive.

I used the electronic boarding pass flying delta Christmas 2010 and I must say it went pretty seamless, Other than a few awkward looks from fellow passengers wondering what was going on. The agent were very cooperative and it felt pretty good to be one of the many ushering in this new era of boarding passes. I definately understand your feelings on the agent and their willingness to adapt. I do hope they adapt quickly.

I used the electronic boarding pass flying delta Christmas 2010 and I must say it went pretty seamless, Other than a few awkward looks from fellow passengers wondering what was going on. The agents were very cooperative and it felt pretty good to be one of the many ushering in this new era of boarding passes. I definately understand your feelings on the agents and their willingness to adapt. I do hope they adapt quickly.