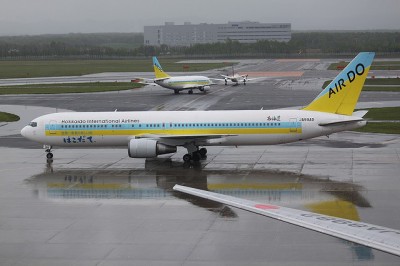 I hope they didn’t pay a designer thousands of dollars to create that piece of crap, as I’m sure most of us could do it for free. Simply type it up on your computer, and you’re done. I must agree David, the design does seem kind-of cheap.

I think that livery was randomly generated with a color wheel and thesaurus. Let’s see…hmmmm……rhymes with “hairdo” ?????????

They are cheaper than JAL on Tokyo-Haneda to Chitose (hokkaidou) on October 30. That is all I could discover using Google translate and clicking randomly on buttons

Air Do is a partial subsidiary of NH. People rarely book tickets on them directly. Most of their sales come through the ANA website (codeshare sales) because it’s a regional carrier that feeds ANA’s larger network. ANA has 4 or 5 of these partial subsidiaries.

Those things truly a NOT very pretty!

Can I burst out laughing?

When I see the name I think Air doo-doo…