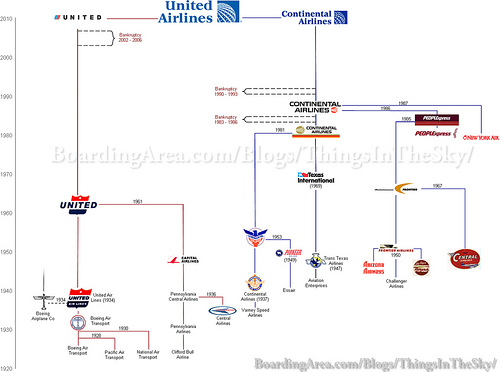 Both United and Continental have interesting pasts

This is almost a guest post once removed. Dan Webb over on his blog Things in the Sky had a guest post from his friend Court who made a wonderful graphic showing the histories of both United and Continental Airlines. We are still waiting to hear the final word on the merger, but I expect it to be approved and the airlines will both move forward. Before that happens, let’s first take a little look back at where both airlines earned their wings (sorry I couldn’t help it).

Check out Dan’s blog to read more and see a larger version of the image.

https://www.airlinereporter.com
Planes, Book Signings and Wine at the Future of Flight on Friday
Airline Livery of the Week: Flydubai
9 Comments

..does he have one on the DL/NW merger as well?

Delta actually did theirs first, which is what gave me the idea, which is a nice way of saying I stole their idea.

Dang you are on top of things 🙂

My ears were ringing 😉

hi, is there a way you can email me a larger version of the image. Its actually really cool.

Both well-versed in Ch 11 proceedings.

Varney Airlines, which was bought by William Boeing after he founded Boeing Air Transport, is missing from the graphic.

Is there a better resolution of this timeline? It would assist me greatly if I could see the words better.