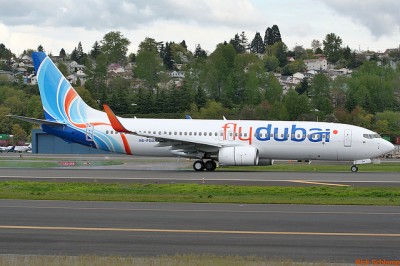 Flydubai Boeing 737-800 (A6-FDA) taken at Boeing Field in Seattle, WA before its delivery to the airline.

Flydubai is a relatively low cost carrier flying out of the Dubai International Airport. They have a feel of all Boeing 737-800 aircraft. They currently only have about ten aircraft, but have orders for over 50 more. The airline was founded in March 2008 by Ahmed bin Saeed Al Maktoum, who is the chairman of Emirates Airlines. Flydubai is not affiliated with Emirates at this time.

With so many aircraft on order, there is an aggressive growth strategy to expand their presence in the middle east.

Thanks Laura B for suggesting this livery!