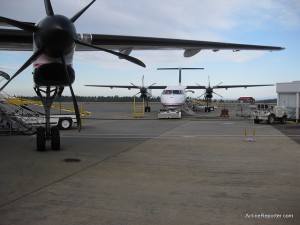 The headline is a bit miseleading. Based on the link you provide and other stories I’ve seen, there’s no indication that at this time Horizon, as a brand will disappear. The change in the business model as described in the link below is potentially unfortunate for routes that are mostly local traffic and do not connect to Alaska or other partner flights.

Sorry don’t mean to make it mis-leading (or trick you into reading a story from a misleading headline).

I don’t think the Horizon brand will disappear either, but it is a distinct possibility…with time. Look at other legacy/regional relationships. Horizon/Alaska has always been unique because Horizon flew and marketed its own brand. However, if they fully turn into flying CPA flights for Alaska and possibly other airlines, they might change their livery to match that of the hiring airlines.

Either way, I really hope Horizon can keep their level of service they provide passengers.

Technically the title is correct, but “brand” is taken different ways. I hope that there is some degree of autonomy for Horizon despite the CPA. Alaska Express or Alaska Link is a lame name. If they’re going to be changing it, let’s hope they’re clever about it.

I agree with you and have changed the title 🙂

For those of you just joining us, the old title was “horizon will stop flying under its own brand”

I hope that the Horizon name will stick around. It has been around since 1984 and I think has a very positive relationship with passengers and customers.

I read the internal memo only to QX employees, and it wasn’t as “sunny” as the press release that’s been sent out. Basically, the new head of QX said everything is on the table. New uniforms. The potential loss of QX as a brand, becoming Alaska Air Express. The loss of jobs. It’s actually going to be quite visible to the pax, I believe.

The thing that really needs to be answered is this: QX flies about 45% of their routes that will supply this CPA agreement. What about the other 55%? Is it just being dumped? If it doesn’t fit in the CPA model, what’s going to happen with it? The internal memo skirted around the issue. This is what makes me nervous. I don’t want to see QX disappear, only seeing it in old movies (like you can see Eastern and TWA in old movies).

I have been assured QX isn’t going anywhere anytime soon. Even if the brand is lost (which would be a shame), the QX service should still survive. Much like how regional carriers will have a distinctive brand of service from the brand on their aircraft.

I would imagine if flights are not profitable and Alaska doesn’t want to pay for them, they might be eliminated, but that doesn’t mean an Alaska 737 might pick up the route. Just be once daily vs multiple flights per day.

It is interesting for sure to see what will happens in the future, but I think Alaska knows how special Horizon is and I am sure they don’t want to do away with that brand!

Very true…because nothing happens until January!

It is unlikely that an airline could change its business model like this and not have its own voice without some changes for the customer. I like Horizon, mainly because of the free beer so if they transferred that to the Alaska Airlines 737 and consolidated a few of their runs from once every hour to once every 2 hours I wouldn’t see a problem with that.

I think the Horizon experience is a little bit more than free beer, but that is one of my favorite parts :).

Yes, it might be possible that some of Horizon flights could be folded into Alaska, that would be big changes for customers. Probably quite a few routes would have to be pulled since they couldn’t be profitable using Alaska’s Boeing 737’s vs Horizon’s Q400’s.

You are would see less frequency of flights. For example taking a look at Seattle to Spokane, WA — there are 12 daily flights on Horizon. There are three on Alaska on B737’s and three on Southwest on B737’s. If Horizon pulled out of Spokane, you might see Alaska add a few flights, maybe even Southwest, but it wouldn’t be the same number of choices you had with Horizon.

Well according to seat guru the horizon plane holds 74 and the 737 144. So basic math if some of the flights I have flown in the 1 per hour markets make money. 1 jet per 2 hours should make the same if not more by being more efficient.

Jet’s don’t have the same turn around times. It takes a lot longer to get people on/off a Boeing 737 than it does with a much smaller Q400, especially when you are using the front and rear doors.

That is why once every 2 hours would be more realistic than once an hour.

The Boeing 737 is a more expensive plane that can make better profit flying other routes. It wouldn’t make sense for the Alaska group to put more 737’s on a route that is better served with smaller, regional aircraft. There is a lot more math involved than just the number of seats and number of flights…math that is much more complicated than I know how to do, but I assume the fine folks at Alaska can do that math.

Why wouldn’t they do this if it makes them more money? As long as their level of service can stay the same, why not?

Well the idea is hopefully it will help with profits. I think the fear is the airline could be absorbed, change too much or possibly go away.

Of course if they can be more profitable and stay the same great airline, then yes it totally makes sense.

well as long as they don’t cut the level of inflight service, then I am fine

I’ve always enjoyed Horizon Air and their small planes. I don’t think it’s a big deal and your post is not misleading in any way. I think it’s good that Horizon wants to increase profitability. I mean, who doesn’t? I don’t think Alaska would be silly enough to change how Horizon functions. If it ain’t broke…don’t fix it.

I think you are right. Horizon has a good formula and I hear a lot of good things from people that regularly fly them. I can understand the need to change the business model, but hopefully not too much change for the customers in this case!

Recently I flew on a Horizon flight. It was a very pleasant flight which is quite the compliment coming from someone who used to have a fear of flying. I hope that these changes being made don’t end up having an impact on the customer since they’re obviously already doing a good job.

I am a big fan of Alaska Airline and have been an Alaska air miles card holder for years! Since Horizon does have a CPA agreement with Alaska I have been able to still use my miles on Horizon flights, which has been awesome since I fly to Spokane often and Horizon is the more dominate carrier between Spokane and Seattle. Even though they are smaller planes and it’s such a short flight I do appreciate the service they provide and do hope they continue that level of service, for it has become slightly superior to Alaskan airlines service. With the way the airline industry has been declining, it is really beneficial to in a sense combine forces to make a stronger impact in the market since so many are going bankrupt these days! I hope with this change they can continue to uphold their service and standards that we have come to expect from them.

I fly Horizon fairly often and have always appreciated their level of customer service (not to mention inexpensive rates). Though it’d be sad to not be able to choose Horizon specifically, I suppose it’s comforting to know that their services will still be available. (Were Horizon’s name to disappear, I’d assume Alaska had absorbed it since I’m an airline amateur 🙂 and Alaska and Horizon have always been interchangable terms for me). Great Article!

I’ve benefitted from being allowed to use my Alaska Airmiles on Horizon flights too, Meg!

Back in March ’08 I flew from Santa Rosa, CA (STS) to LAX on Horizon (Q400) and then Alaska (737, of course) on to Loreto (LTO) Mexico. Heading back in March ’11, but LAX to LTO is now being handled by Horizon, not with a Q400, but a CRJ-700. Guessing traffic to LTO has dropped off necessitating the switch to the smaller type. Since Horizon is looking to dispose of their CRJ fleet, I wonder if the Q400’s will eventually take their place, or will it go back to Alaska?

This post gives clear idea designed for the new viewers of blogging, that genuinely how
to do blogging.

Hey there, I think your blog might be having
browser compatibility issues. When I look at your blog in Firefox, it looks fine but when opening in Internet Explorer, it
has some overlapping. I just wanted to give you a quick heads
up! Other then that, amazing blog!

I do believe all the concepts you’ve introduced for
your post. They are very convincing and will certainly work.

Still, the posts are very brief for beginners. Could you please prolong them a bit from subsequent time?
Thank you for the post.