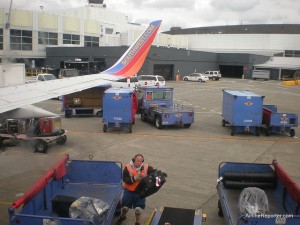 Southwest wingtip at Seattle. I am cheating, this is an older photo, but there are no Southwest planes at gates right now at SEA.

The air show of the year is going on right now in Oshkosh, WI and I can’t miss it. I am once again back at Seattle-Tacoma International Airport (and loving their free Wi-Fi) waiting for my Southwest flight to Chicago (MDW). Then tomorrow, Southwest will be flying a special flight to Oshkosh from Midway just for the day. Only having one day to look around might be very, very hard, but I am excited to be going. I need to make a list of MUST-SEE’s.

Last time I flew Southwest, I slacked and ended up in the B-group. However this time I wasÂ vigilantÂ and got in to the much coveted A-group. Window seat, here I come!

Must see in Chicago = the Museum of Science and Industry. They have a captured German U-boat and other great artifacts. If that’s not enough to tempt you, they also have a United Boeing 727 suspended from the ceiling/walkway that you can go on. The last time I was there a former United 727 pilot was on board asking questions.

Alright, figured it all out, going on Sunday :). Thanks!

Haha, I was wondering if it was just a crazy old pilot asking questions :). That looks awesome, I am going to try and check it out. Now to figure how to get there on Sunday. Thanks!

There is great youtube video of them landing that 727 on the way too short runway back when it was retired. The airport is right on the lake. Too bad you will miss the Chicago Air Show by a couple weeks. One of the best FREE shows around.