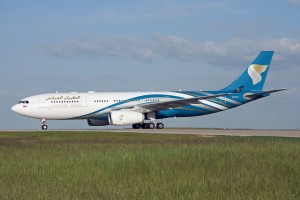 My guess is that Pacific Flyer didn’t want to spend too much as a start up, so they adapted to the existing livery on the one plane of their fleet…which came from (ta da!) Oman Air

Right on! Although you would think Oman wouldn’t want another airline to have the same livery.

WRONG….the Airbus 310 its already flying for Pacific Flier and of course remained the Oman colours cause the plane was previously in OMAN AIR…its reg is CS-TEI, and belongs to Portuguese ACMI Specialist Hi Fly, wich flown in OMAN for many time…The other siter of CS-TEI is TEX and have the other colour scheme of Oman, the famous Red/Green Tail…just google it…Tanx

Basic Oman Colours and already PF titles as in the site!

Who cares if it was copied from Oman Air. Most people would not know that anyways and it still looks great. Maybe it was the same marketing company that created the liveries 😀