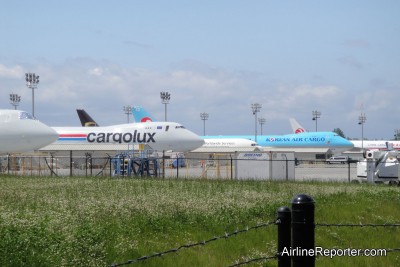 Today, I got word from Jon Ostrower (aka FlightBlogger) that a Boeing 747-8 Freighter with a  Korean Air Cargo livery should be outside at Paine Field.

Certainly a beautiful site, 747’s gathering on the flightline of the Everett Paine Field wrapped in the colours of international customers.

When Pepsi first started advertising their new logo…. all they had was the new logo … I thought it was Korean Air advertising all over the place…
I think their AD company should be fired for that one…. too similar…

Yes, it isn’t that Korean Air’s logo looks like Pepsi’s new logo, it is the other way around!

Depends on how you look at it. The new Pepsi logo came after the Korean Air one, so I went that way!

The aircraft is owned by Guggenheim Aviation Partners and probably one of the two ordered in september 2006 and leased to KAL Cargo. see 747 fleet listing at http://www.airlinerlist.com/

Well at least it is good to know that the Boeing 747 age is not completely over. The aircraft is still being ordered by many airlines for Cargo operations, including Korean Air. It looks alot more like the Boeing 747-100/200 from further away though with the shorter upper deck.