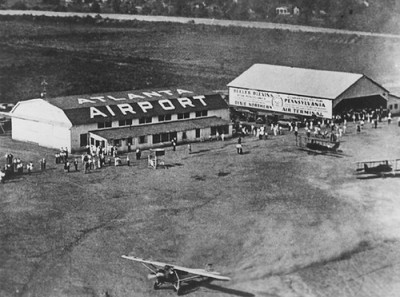 An aerial photo of Atlanta International Airport in the 1930s.

On this date in 1930, Delta Air Lines started service with a Travel Air S-6000-B with five passengers to Atlanta International Airport (ATL) from Birmingham, Alabama. At the time, the ticket would only cost your $9.80 (which is about $150 in today’s dollars). Delta moved their headquarters to Atlanta in 1941 and has been there since. During their time in Atlanta, they have met a lot of milestones:

Spending 80 years flying passengers around the world from Atlanta is pretty impressive. When flying into  Atlanta, it is quite obvious the impact that Delta has there. Cheers to another 80+ years of Delta flying out of Atlanta!

Interesting Stuff:
* Photo of the “Fly Delta Jets” sign I took last time I was in Atlanta
* Review of Delta flight from ATL to SEA
* Additional Travel Air photos
* Photos of ATL through the years