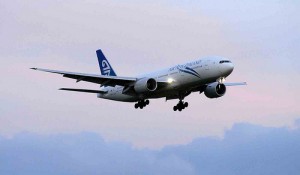 The idea of being able to access the internet on a flight is almost not newsworthy anymore, since it is so common (I love that). But a recent press release from Air New Zealand did catch my interest.

The airline will offer mobile phone and data capabilities with new Boeing 777-300’s to be delivered in November. In connection with AeroMobile, passengers will be able to text message and email on GSMÂ  phones. You will not be able to talk on your cell phone (thank goodness) and Air New Zealand does not plan to allow it. AeroMobile does have the ability to allow passengers to talk, but Air New Zealand decided not to offer that service (thank you).

â€œFeedback from our customers has shown they wish to be able to text, and check emails, to stay in touch with friends, family and colleagues during their long-haul flights,â€ said Ed Sims, Air New Zealand Group General Manager, International Airline.

You will still have to wait until you reach cruising altitude and your phone must remain on silent mode (good thinking). There is no additional fee except for standard roaming and text charges. Don’t go texting like crazy on your seven hour flight until you confirm your cell phone’s international roaming plan.

How does this work? AeroMobile installs a small base station (called a Picocell) on the aircraft, which relates data on board the airplane to a satellite, then back down to the ground. since there is very little needed to install the Picocell, there is no downtime for the aircraft, since it can be installed during normal maintenance.

Another great step towards being fully connected, even while flying!

I will like now grasp your rss meat to outlive aware of any updates. salubrious motion and by rather a lot multiplication finance your taking place efforts.

This is very attention-grabbing, You are an excessively professional blogger.
I’ve joined your rss feed and sit up for seeking extra of your magnificent post.

Also, I have shared your website in my social networks