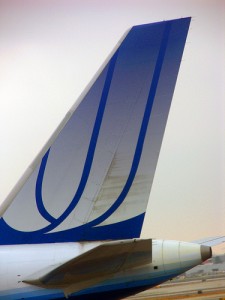 United Airline's tail could use a little wash

On April 17th, 18 year old Jessica Cabot was flying from British Columbia to Florida, when she ran into some trouble while on a stopover in Chicago. Cabot is blind and she was waiting for flight attendants to escort her off the plane, but no one came. When she heard the plane door shut and latch she started to panic. After ten minutes two maintenance staff found Cabot and assisted her. She was told to wait until after all the passengers go off, then someone would assist her off.

After complaining to United, Cabot received a $250 airline voucher and a promise she would receive an apology. However, it took United five weeks to connect with Cabot and apologize. “They just called,” said Cabot. “I can’t even count how many times they said sorry.”

Sarah Massier, a spokeswoman with United Airlines in Chicago, said Cabot had a longer delay in getting an escort than expected. “We apologized to Ms. Cabot for the delay in providing her an escort, and have taken action with our employees and vendors at O’Hare to ensure this does not happen again.”

Cabot was told that the flight attendants were mortified Cabot was left behind. “She said they had done their sweep of the plane and I was a tiny girl,” said Cabot, who is 5-foot-3. “Does that mean if you’re short they’re not responsible?”

Cabot is returning home on a Delta flight soon and says she still plans to fly United (maybe just for the $250 voucher).

This comes after Air Canada Jazz recently left a sleeping passenger in one of their planes. This is not only bad customer service, but a huge safety issue. I know a lot of flight attendants are exhausted by the time they reach their final destination; I just can’t understand how a person can be missed.

Wow United, you must be so proud of your employees.

Why is it when there is some big blunder by an airline it always seems to be United!!

United has been getting so bad they cancelled our connecting flight from Dulles to Nashville 5/21/10 30 minutes before our LVIA flight took off to Dulles, and the computer even re-scheduled our flight to the next day without authorizing it with us, and never told us of the problem before flying and stranding us in Dulles without any connection…and refuse to refund or appologize, claiming we used the flight to Dulles.

interesting the worst airline in the world Air Canada leaves sleeping passengers on the plane.