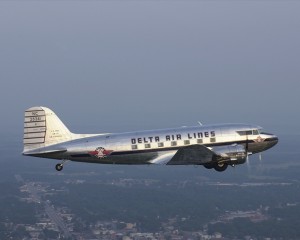 The DC-3 is a classic. It was the workhorse of commercial aviation. Delta Air Lines, via their blog, shared the restoration of Ship 41, which was the second DC-3 delivered to the airline. She entered service in December 24, 1941 and served a reliable 18 years with Delta before being sold to North Central Airlines.

DC-3 ended up serving with a lot of different airlines and in 1990, Delta started to make a big effort to track down any of the first five DC-3’s delivered. Ship 41, which was registered N29PR, had been flying cargo for Air Puerto Rico and in 1993, Delta bought the plane. The DC-3 was flown back to Atlanta for restoration.

When restoring the DC-3, Delta wanted to make sure the cockpit was updated, without taking away the plane’s history. Updated communication and navigation equipment were installs, but located in discrete areas of the cockpit. The cabin was remade with the original patterns and fabric.

She last flew at an airshow in spring 2005, but has been grounded since. If you are in the Atlanta area you can check out Ship 41 at the Delta Air Transport Heritage Museum and if you can’t make it over there, check out their website with many photos and a few videos or you can check our their Flickr.

I love the DC-3 and the Delta livery on it so much, this airplane is actually in my model collection.

https://www.airlinereporter.com
Design Your Own Airplane – Get it on display
Another Passenger Gets Left on an Airline and Now is Suing
2 Comments

Thanks, David, for featuring Ship 41 on your blog! I was lucky to come to the Delta Museum in mid-1998 when the plane still basically stripped down to the framework, and then see it put together into the 1940s beauty it is today! Happy 75 years of the DC-3 everyone!

It was my pleasure. I am curious why she hasn’t flown in so long. What does she need to fly again?