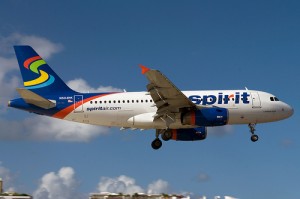 Do you have a business? Do you have some extra cash you want to spend on awesome advertising? Have you wanted the challenge to create an ad on a barf bag? Well Spirit Airlines has a deal for you!

Spirit Airlines has announced their Mile High Media plan with the tagline “marketing with altitude” (I am guessing they couldn’t decide which saying to go with, so they went with both). With this new plan, you are able to advertise on almost anything over their entire fleet. Check out some of these deals:

Man, If I had an extra $20,049 I would LOVE to put ads on the barf bags. Their report has a lot of other interesting facts about Spirit Airline’s passengers (according to them):

I am not sure about that last one, but we can pretend I guess. At least from the people I have spoken with, they don’t plan to fly Spirit Airlines again, yet do when they compare fares.

Although advertising on weird locations causes most people to groan, I don’t think it is a bad idea. You have a captive audience and having anything to look at can be somewhat entertining. I really think a creative marketing person could have a lot of fun coming up with an ad on a lavatory door or on a barf bag.

AirTran installed ads on the backs of all their seats a while ago and I have flown them a few times since and wasn’t annoyed.I think if you found ads on your first class seat for Virgina Atlantic, you might have a big issue. But finding ads all over on an “ultra low-cost” airline, it shouldn’t really surprise you too much.

https://www.airlinereporter.com
VIDEO: Fire Testing on a Mock Aircraft That Appears to be the Love Child of a 747 and DC-10
FUN WITH PHOTOS: How Many Tails Can You Find?
9 Comments

I can see it now–Dramamine advertising on the barf bags: “Next time, take Dramamine”

Only thing Dramamine does for me is knock me out. Which isn’t a bad thing for a longer flight I guess!

I’d like to see another airline buy up some ad space. That would be interesting. “Carryon bags FREE on us”

As a marketing major, I think the idea is genius! Especially the free carry-on thing. A company could really make a killing off advertising like this.

I am actually surprised more airlines are doing this. Yes it can be annoying, but when passengers are buying tickets, I am sure very few will decide not to fly an airline because there will be advertising.

the more revenue they raise in this manner, the less they will have to raise in other ways, such as higher fares.

Exactly! Some people think it will just make the CEO’s wallet fatter, which it might, but really it will make fares lower. People can complain all they want, but most decide on an airline/flight based on the lowest fare.