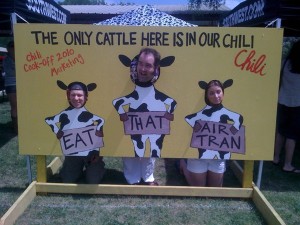 A place to take a picture at Southwest Airline's chili feed!

YES! I have been hoping that Southwest responds to AirTran’s cattle video. In case you missed out, let me catch you up:

Move #1 Southwest had a TV spot that poked fun at AirTran charging for bags.

Move #2 AirTran responded by doing a fun web video saying that Southwest passengers were just a bunch of cattle.

Move #3 Southwest has a fun little spot to take a photo at their Chili Cook-off they had this weekend that says, “The Only Cattle Here is in our Chili.”

Touche Southwest. I think this puts the ball back in AirTran’s court. To me this sort of friendly banter is fun and can cause some brand loyalty.

https://www.airlinereporter.com
BREAKING: Midwest and Frontier have a new name: FRONTIER AIRLINES
OPINION: I argue that the LA Times has it all wrong!
6 Comments

Herb would’ve arm wrestled the AirTran CEO, and then drank him under the table.

Okay, I have said this over and over again; I do NOT like Southwest Airlines. I have not flown Southwest for 5 years after having one bad experience. Usually, I would choose one airline over the other to save myself a couple bucks ($50+ Min. Hey, that’s several drinks), but I have passed on Southwest even if I would have saved $200. AirTran’s Cattle Video response is spot on! Love it!

You can’t compare them. I agree AirTran’s cattle video was spot on. I actually gave up flying Southwest. I did not have a “bad” experience but I had a concern, so I wrote to them. They wrote back months later, but the letter was very condescending. They lost a bunch of business from me! Now I’m getting these offers for credit cards where if you get the credit card you get a free flight on SW. Rip them up, don’t even want to bother with them. I flew them also for about 5 years. Now the latest joke is the extra 10 bucks you have to pay for to get “priority boarding” on SW. Just another way to scrape another 10 bucks from your wallet. But what can you do, you have to buy it or you get stuck in the back of the herd.

I think the Southwest boarding can cause a lot of stress on people. But statistically, even if you are at the very end of B-group and everyone before you takes a window or aisle, you should still be able to get one seat that is window or aisle. But in reality people take the middle seat too.

You are only really screwed if you are far back in the C-group. But that is why I make sure I check in early!