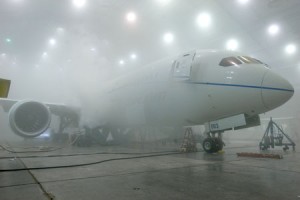 If you have been following the path of the Boeing 787, you know that ZA003 recently made a trip down to Valparaiso, Florida for extreme weather testing. Being in Florida you might assume they are testing the Boeing 787 Dreamliner in just hot and humid climates.

However it just recently went through extreme cold testing of minus 45 degrees Fahrenheit (that is about minus 43 Celsius). How do does this happen? Well, you find a big facility that can create it’s own temperature (and snow). Eglin Air Force Base, just outside of Ft. Walton Beach, has a climatic chamber, large enough to house the Boeing 787. In the mid-1990’s, the chamber was opened up to the general public at a cost of $20,000 to $30,000 per day.

Normally Boeing chaces the cold weather around the globe (normally finding it in Fairbanks, Alaska), but having a controlled environment is so much easier. “Here we say minus 45 and they set the knob to minus 45, and work their magic and get minus 45 and it stays there as long as we want it,” Tom Sanderson, one of the flight test directors for the Boeing 787 told Glenn Farley with KING5.

The Boeing 787 will also undergo extreme hot testing of 115 degrees Fahrenheit (about 46 degrees Celsius) in the same facility. ZA003 is the only Dreamliner with a partial interior. The aircraft will be living at the facility for about two weeks to conduct all the testing needed.

I am sure you want to see more than one photo, luckily I have tracked down some additional media for your enjoyment: