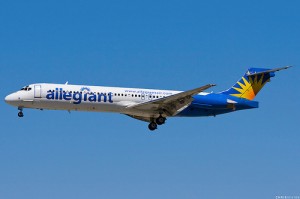 Allegiant Air has been very successful over the last few years.Â They fly a fleet of about 45 older MD-80’s (their average age is about 20yrs), but they fly to smaller airports around the country and concentrate more on leisure passengers than business. Allegiant Air has been around since 1998Â and currently fly to over 70Â destinations.

Ben Mutzabaugh, who writes Today in the Sky for USA Today, was able to sit down with Allegiant’s CEO Maruice Gallagher for a unique inside look of the airline and its future. Be sure to check out his multi-part interview:

Q&A Part I:Â Fliers may not like them, but will they pay them?
Q&A Part II:Â A la carte fees have been a ‘revelation’ for U.S. airline industry
Q&A Part III:Â ‘We’re not ruling anything out’ Â on Orlando airport switch; AirTran competition
Q&A Part IV:Â Allegiant Air CEO discusses Hawaii, MD-80 fleet