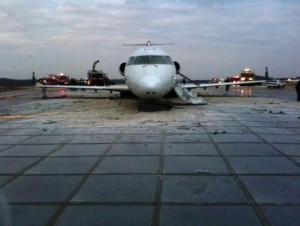 US Airways Flight 2495 was departing from Charleston, heading to Charlotte with 31 passengers and 3 crew and was powering up for takeoff. During take off, the pilot decided to abort. It is still not clear why the pilot made this decision.

The CRJ200 was going too fast and went off the end of the runway and about 150 feet onto a crushable concrete arresting system that stopped the aircraft from going down a steep hillside behind the runway. Normally the FAA requires 1000ft of safety room at the end of the runway, but due to the safety system’s superior stopping abilities, only 403 feet of it is needed.

None of the passengers or crew were injured and the runway was re-opened six hours after the incident.

For more information and an additional picture, check out Flight Global

https://www.airlinereporter.com
Boeing 747-8 Could Be Vulnerable to Hackers
Get VIP Tickets to Watch the Boeing 747-8 First Flight
2 Comments

I remember watching this on CNN when it happened. Have they come up with a cause for the accident yet?