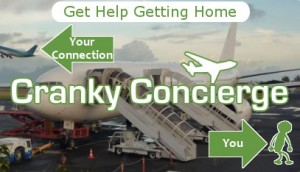 Need help traveling? Cranky Concierge is there to help!

This is where your own professional airline dork sure would come in handy — and now you can hire your own, Brett Snyder. Snyder is an airline dork! It is ok, he is the one that calls himself that. He is also the creator and blogger behind CrankyFlier.com and now he wants to share all his knowledge and experience to help make your flying experience the best it can be.

In October 2009, Snyder decided to create Cranky Concierge to assist fliers and hopefully make a little money. For only $30 per itinerary (covers all passengers taking the same trip) you get:

* Flight Planning: Snyder will hunt for the lowest overall fare, best way to get there and where to book your flight.
* Flight Monitoring: Snyder will send you a comprehensive email with all your flight information, then monitor the weather and other possible factors that might interfere with your flight.
* Delay & Cancellation Assistance: If he detects a delay or a cancellation, he will find alternative ways to get to your destination.
* Post-Trip Disputes: If something went wrong, he will help you deal with the airlines to help make it right.

Cranky Concierge has been going for a few months now and he has heard a lot of positive feedback from its 75 users. Things have gone so well that the service has grown beyond just Synder. “I just brought on two concierges to help with this, so we now actually are a ‘we.’ One has just started and he will be training as new clients come on. I expect the other to start soon as well. The plan is to have each concierge assigned to a client, so that client will always have a single point of contact with someone who knows exactly what has been happening at all times,” Snyder explained.

Snyder’s friends really motivated him to start this service. “Back in July 2009, I helped a couple of friends get out of a jam, and they really pushed me to turn this into a business. It’s funny, because they’re also the friends who pushed me to start The Cranky Flier back in 2005. I owe them a lot,” Snyder said. Those are some special friends!

This service is a genius idea. Only $30 for to have peace of mind about your flight? Checking two bags costs more than that on most airlines.

Snyder has big plans for the future. When asked if he has thought about working with Expedia, Orbitz, or other travel sites, he told me, “There’s no question that I’ve thought about that, and I think it could be a really nice service for an airline or online travel agent to offer. But I haven’t made any real efforts on that just yet.” He hopes to be able to build the business. If his blog’s success is any indicator I am certain Cranky Concierge will be around a long time, helping travelers be a little less cranky.

I flew with the Cranky Concierge last November when we flew round trip from Houston to Kailua Kona and back. We had had a nightmare experience during our last Kona trip. Brett made sure this trip went smoothly. I would highly recommend his service. Well worth the expense!!