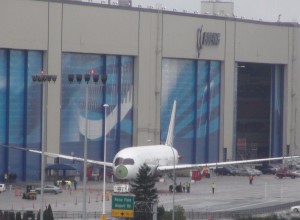 It is always fun to see the large hangar doors at Boeing open. It is more fun to see it when aircraft comes out. Today, I got to see the Boeing 787 Dreamliner fatigue airframe leave the Boeing hangars. I snapped a few pictures from the Future of Flight and from a road close to the test plane. The Boeing 787 is a beatiful aircraft, but you could tell this jet-less airframe has been used and abused — she didn’t look so great. Flight Story Aviation Blog has some great pictures of her back in April 2008.

Matt Cawby, who runs Paine Field Blog, alsoÂ got video of the test Boeing 787 being rolled out. Notice how Boeing had take two Boeing 777’s out of the hangar to get the beat up Dreamliner out.