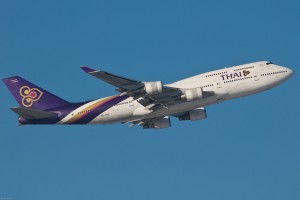 Thai Airways is the national carrier (can you guess) of Thailand. It was founded in 1960. It is almost 54% owned by the Thai Government and has achieved profit over the last 40 consecutive years.

Check out a video that shows a Boeing 747-400 landing with old livery, then one with new livery. You can also see two Boeing 777’s next to each other — one with the new and one with the old livery.

I love the rich purple colour in the Thai Airways brand.