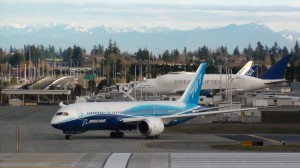 The Boeing 787 Dreamliner with Dreamlifter in the background. Took picture this Saturday during taxi testing.

UPDATE 12:05pm: I am currently at the Future of Flight and just took some cloudy pictures of the Boeing 787. Hopefully tomorrow will be a bit better.CHECK THEM OUT.

I know my blog has turned into a Boeing 787 blog recently, but that is because tomorrow could be one of the most exciting days in aviation history and I am excited to be a part of it. I say “could” because the weather could have other plans, but so far, it looks likeÂ it might cooperate.Â Â It was beyond exciting seeing the front wheel of the Boeing 787 lift off on Saturday (as you can tell by my comments and people clapping around me) and I feel privileged toÂ be there tomorrow to witness and record the event. As I did with the taxi tests, I hope to get my content up as soon as possibleÂ and then add links toÂ photos and videos of others that were there as well.

I won’t be providing a live feed of the first flight,Â although I will be taking video. I am currently researching who will be providing live feeds andÂ I will provideÂ you links early tomorrow morning.