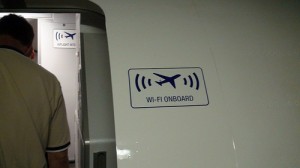 The sign outside of my first Wi-Fi flight back in May.

Yes! I am coming out and predicting that someday Wi-Fi will be free on at least some airlines. I am not talking first class or business class; I am talking about free Wi-Fi for the entire plane. Let me explain…

Southwest Airlines is the newest airline to announce adding Wi-Fi to their flights. Many other airlines already have some or all of their fleets wireless. It took the industry a long time to start becoming wireless, but now almost all US airlines have at least a few Wi-Fi equipped aircraft. The rapid growth shows capitalism at its best. When one airline has Wi-Fi, it provides an obvious advantage over those that do not. However, when almost all airlines in the United States have Wi-Fi, where does one airline stand out over another?

Think about long-distance on landlines (you remember those, right; where wires connected your phone calls?). It used to be mighty expensive to call based on time of day, then there were flat rates per minute, then you could just pay a monthly fee and call whenever and whomever you wanted. The same phenomenon happened with cell phones. Minutes used to be costly, now companies have plans with unlimited minutes, rollover minutes, etc. As competition grows, so do the benefits for the customer.

With Wi-Fi on the airlines, it is a bit more complicated; airlines don’t run the Wi-Fi, independent companies do. Some airlines like American, Delta, and AirTran are using Aircell’s GoGo tower-based Wi-Fi service, but Southwest is using Row44, which is a satellite-based system. Either way, Wi-Fi companies are competitive businesses that have to charge the airlines, so the airlines would need to absorb the costs to provide free Wi-Fi.

I know, with airlines charging fees for everything today, why would an airline ever be willing to absorb the costs? I think we are in a unique time. I don’t expect all these fees to be around forever (at least I hope not).Â  All it would take is one airline. One airline to announce they have free Wi-Fi. It might be years from now when this happens, and it might take Â a few more years for other airlines to follow. However, this is how things have become cheaper and free in the past.Â  With so many airlines in the US, it is feasible that one might want to come across as a “high-tech”, “medium frills” airline.

Hopefully I am right in this one, but if I am not, I am still willing to pay $13 to access the internet on a flight!

https://www.airlinereporter.com
Another Naked Guy – On a Southwest Flight to Las Vegas
Airline Livery of the Week: Rak Airways
1 Comment