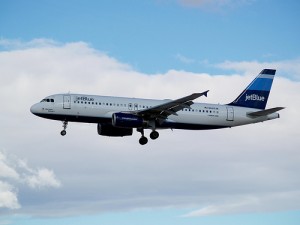 This is not the first time an airline has done something like this. American Airlines allowed folks to pay $250,000.00 to fly free for life, however the program ended in 2004. Earlier this year Cathay Pacific offered their All Asia Pass, where travelers could get unlimited flights to selected cities over a three week period for around $1500.00. Air Canada has also played with the notion of having unlimited flights. The problems in previous attempts, is #1 having too many restrictions or #2 being too costly (the last American pass sold for $3million). It seems JetBlue might have the right formula with relatively low cost and low complexity.  It is something I would seriously consider taking part in, if I had a month I could take off of work!

When I was in college-40 years ago- some airlines were promoting flying by offering half fare stand by to students. They also had “mystery” flights for about $20. You didn’t know where you were going until you got on the plane!

I would actually love to do some sort of mystery flight. I wish airlines would bring that back!

I have been browsing the web more than 4 hours today, and this is the best article I’ve come across. I’m a article fiend so I’ve actually read a lot already.In my opinion, if all web owners and bloggers made as awesome content as youhave, the web would bea lot more useful than ever before.

are there any work from home jobs that are not scams
August 24, 2014

Hello, I enjoy rrading all of youur article.

Take É‘ lÖ…ß‹k at my webpage :: are there any work from home jobs that are not scams

If some one desires to be updated with hottest technologies therefore
he must be visut this site aand be up to date daily.