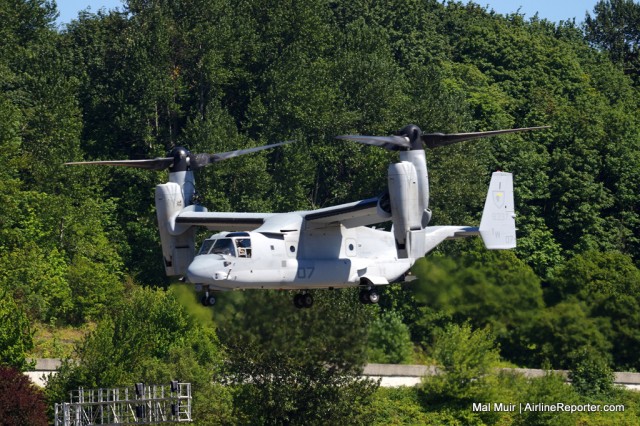 Summer in Seattle means lots of things to locals in the Pacific Northwest. Â Long days with the sun setting at 10pm, with Mt. Rainier standing out tall and proud in the skyline. Â Blue skies, sun, and outdoor fun, but most of all it means one thing for AvGeeks: Â Jet noise!

During the first weekend of August in Seattle is Seafair, and the main attraction has always been the Blue Angels (it also coincides with Fleet Week). Â However, this year, things were a little bit different over the skies and on the ground in Seattle. Â The United States Marine Corps (USMC) came to town. Â They were not going to let the US Navy have all the fun, and this year, it was time to bring Marine Week to Seattle.

This year the USMC decided to bring Marine Week to Seattle to showcase and honor not only the Marine Corps as a whole, but also how much of a role the Corps has to the local area. Â People in Seattle could meet the Marines themselves, learn about what they do, why they do it, and then get to see how they do it. Â The biggest part of the weekend would be the Marine Air Ground Task Force (MAGTF) demonstration over the skies of Lake Washington.