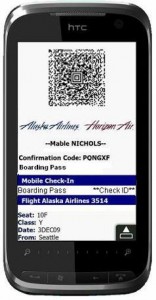 The future is nearing. A little over a year ago I talked about electronic boarding passes becoming a reality.  Today, Alaska Airlines and Horizon Air are launching both a mobile-friendly website and electronic boarding passes for passengers flying from Anchorage, Boise, Denver, Las Vegas, Portland, Seattle and Spokane.  There are already 30 airports and six airlines testing out this technology: Continental, Delta, Alaska, Horizon and American. Surprisingly, Alaska and Horizon are the first non-legacy airlines to test out the new technology.

Travellers are able to check in using their mobile phone up to 24 hours in advance of their flight. They are given an encrypted barcode along with the passenger and flight information. While going through security, TSA will be able to scan the electronic ticket, check id and the passenger is good to go.

In the next few months, the service will be spread to other Alaska and Horizon cities. In the future, they told me we, “will see more mobile device enhancements to make travel more convenient.”

Is this the future of airline travel? I really think so. No more having to double check to make sure you have your boarding passes. No more having to track down a departure screen to see what your flight status is. The biggest problem will be remember to charge your phone before leaving. Nothing would be more frustrating than waiting in security for 30 minutes, have your phone die, having to go wait in line to get your boarding pass, then get through security again.

Personally, I haven’t been able to test out this new technology. Have any of you been able to? What are your thoughts?

Alaska Airlines is working on ways to save a few million gallons of fuel per year. The fuel savings will not only trickle down to a passenger’s pocketbook, but it would also cut down on environmental and noise pollutions.

Throughout the summer Alaska has been testing next-generation flight procedures at Seattle-Tacoma International Airport (SEA) that have been dubbed “Greener Skies.”

The new procedure breaks away from the traditional “stair-step” method of descending into an airport. With current protocol, the control tower will assign altitudes airliners will cruise at. The pilot will descend to the new altitude, increase power to maintain the altitude, and wait for the next step. The new process takes advantage of Required Navigation Performance (RNP). With RNP the decent is a smooth, linear, and controlled approach without the need to level off. Alaska says the new system could save 2.1 million gallons of fuel and 22,000 metric tons of carbon emissions per year.

Elliott Pesut, Twitterer for Alaska Airlines, pointed out to me that Alaska is the only major U.S. air carrier with a completely RNP-equipped fleet and fully trained crews. I am sure Alaska won’t be the last. Southwest Airlines recently announced their entire fleet of Boeing 737-700’s have the new technology and are in process of training their flight crews. Alaska is working to gain FAA approval to start using it by next year.

It is great to see an airline taking the leadership role of bringing this technology to the forefront and motivating others to follow suit. I hope that all aircraft at SEA will use the technology and it will spread to all airports and aircraft in the US.