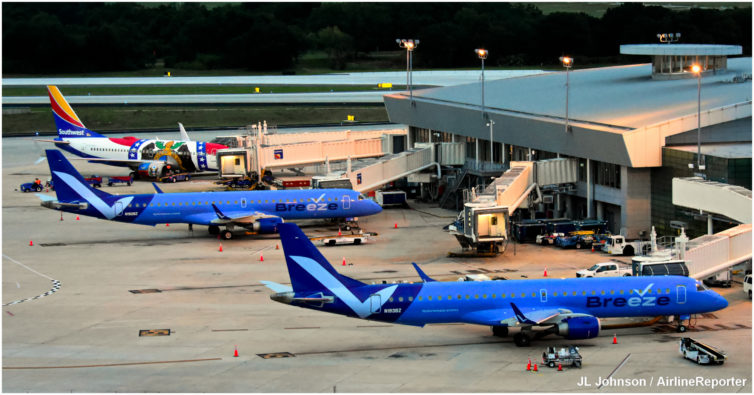 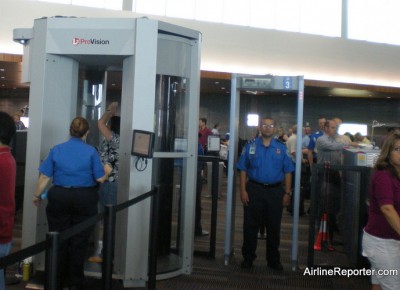 You can see a woman being scanned. The TSA agent who yelled at me is standing in the metal detector.

I have made my opinion on body scanners quite clear. If you have missed it, bottom line is I don’t like them. They violate our privacy and passengers are able to avoid them and request a pat-down, making them pointless.

On Sunday I flew from Tampa to Seattle via Denver and got my first view of the body scanners in action at Tampa International Airport. The scanner is not too imposing, but it is obviously something different. There are a few body images by the scanner that show you what it does, but they are small and people are rushed by them.

The whole time I was waiting in the security line, the body scanner wasn’t being used. By the time I was taking off my shoes, they had started pushing passengers into the scanner versus the metal detector.

I started to get excited. Not to try it out, but to respectfully decline going through the body scanner and get a pat-down instead. Well maybe excited is not the right word. The thought of having some stranger feel around my body isn’t Â great, but I wanted to take a little stand against the privacy invading machines.

I was flying with my girlfriend, Amy, and even though she knew about the scanners (or had heard me rant about them from time to time), she really didn’t understand my true dislike of them. The two people before us were told to go in the scanners. Then I was next, but I started going to the metal detector instead. I was waiting to be told I had to do the scanner or pulled aside to get a pat-down, but I was not. I just walked through the metal detector while the people in front of me and behind me were all forced into the body scanner. Now that is a big hole in security.

From what I have read, a passenger who does not do the body scanner, must be patted down. However it seemed unorganized and I don’t think the TSA agent at the metal detector realized people were being pushed into the body scanner.

Amy wasn’t so lucky. She felt rushed and not really sure what was going on and didn’t decline being scanned.Â They made sure she had no foreign items on her, she had to raise her hands and the scanner went around her and then she had to stand outside of the scanner with a TSA agent holding herÂ  in a roped off area (everyone had to do this). He was waiting for someone in another area to view her body images and confirm she was clean. He was talking to them via radio, but they didn’t seem to be working. It took about a minute for him to get a response that the two females could go (Amy was one of them). I trust it was a radio error and those images weren’t on the screen any longer than they needed to be.

After I was done and Amy was waiting to hear she was clear to go, I was takingÂ some photos of her and the scanner. This is when the TSA sprung into action. From the metal detector I heard, “sir, you cannot do that.” I confirmed he was talking to me and that I wasn’t allowed to take photos of the body scanner. I am not exactly sure if there are rules against taking photos. I guess someone might Â take photos and learn how to beat the system? Well I don’t need to take photos to see how the system doesn’t really work, you just had to ask for a pat-down or in my case, just go through the metal detector. They never came over to take my photos or talk to me, so obviously it couldn’t have been that big of a deal to them.

What doesn’t make sense is they took action against me for taking photos, but no one noticed I didn’t go through the body scanner nor get a pat-down. It is so inconsistent. By no means was I trying to do this on purpose, but I imagine similar experiences are happening like this all around the world.

I know I talk negatively about these scanners, but I feel there is some hope in the near future. There are body scanners with Automated Target Recognition that have the ability where no human actually sees your image. The computer looks at your body scan and if there are any foreign items, it will flag you and the TSA will inspect you. There is a display of a stick figure only. If they had this version, which didn’t violate privacy, and it was required, not optional, I could get behind the body scanners. But until then, I will continue to voice my strong opinion against them and about the inconsistencies of theirÂ usage. However, the TSA says there is no system they feel meets their security needs yet.