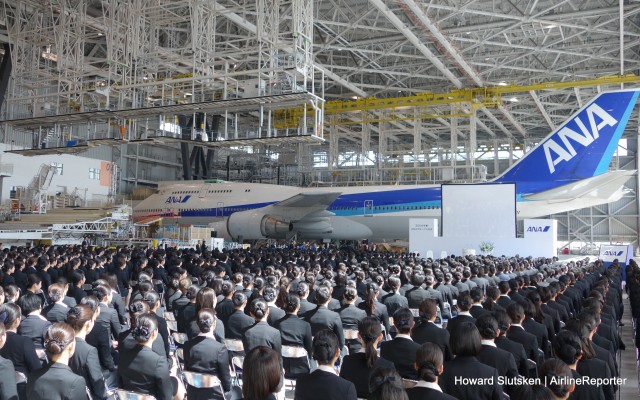 April 1 is actually the start of the financial year for Japanese companies. And along with this fiscal reset, April 1 is the day that groups of recent graduates begin their careers with a new company, a loyal relationship that may very well be life-long. This unique recruitment culture is called Shinsotsu. Talented students are identified at various institutions. They go through testing, seminars, company visits, and other methods to make sure there’s a solid “fit” with a company’s culture and values. It makes sense. In a culture with a tradition of life-long employment, it’s critical for both the students and the companies to get it right.

The ANA – All Nippon Airways Group has well over 30,000 employees, and on April 1, I was honored to be part of a celebration to welcome over a thousand new graduates to ANA. It was Tuesday morning, and I was quite well jet-lagged after the departure events and inaugural flight on ANA’s new service from Vancouver (YVR) to Tokyo-Haneda (HND). Our hosts shuttled us over to ANA’s aircraft maintenance facility at HND. It’s huge, with seven hangar bays and the ability to service all of ANA’s jet fleet, right up to major “D” checks.