This post was written by Steve Fulton, Technical Fellow at GE Aviation for AirlineReporter.com.

It’s unusual to find people in the aviation business who don’t have a passion for airplanes and the business itself.  Just as my GE Aviation colleagues Dale Carlson and Steve Csonka proclaimed their love for aviation in their previous guest blogs, I am also exactly where I want to be in my professional work because of my love for all things aviation. My entire professional career has been a combination of flying airplanes, engineering on-board systems and optimizing the movement of aircraft from liftoff to touchdown.

As the aviation industry’s largest trade show concludes in London and the Olympics move to center stage, it is a good opportunity to reflect on how much business people, tourists, local residents, and even world-class athletes depend on air transportation.  As much as I love this industry, I have to concede to our critics that we are not flying as efficiently and predictably as we should.  Airspace planners in the U.S., Europe, and across the world have recognized the need for a major upgrade, so plans have been made and work is now underway.

At GE Aviation, we call this flight efficiency project: Highways in the Sky.

Around the globe, air traffic is managed today using a ground-centric system that grew up around World War II radar technology.   In the 1950s, as more and more planes flooded the sky, ground-based radar was employed to compensate for the limited onboard navigation capability of aircraft in those times.  Over the years, the ground-based infrastructure has become quite entrenched.

There are a number of technical improvements in surveillance, communication, navigation, and networking of information that are necessary for this global upgrade of airspace operations.  The central concept for how these technologies will work together to better manage the flow of air traffic is called ’œFour-Dimensional Trajectory Based Operations,’ or ’œ4DT-based operations.’  Every aircraft has ’œintent’ for each flight, and in the 4DT-based operations, these ’œintents’ are defined as 4-dimensional trajectories that are communicated and coordinated in a strategic way.

To help explain this change in operational philosophy, I’ll use examples from the world of automobiles. First, imagine a scenario where all vehicle traffic in a particular city is directed by human controllers in control towers through a series of voice commands via radio transmissions. In this scenario, the controllers would be overwhelmed, the airwaves would be full of radio traffic, and a lot fewer vehicles would be permitted on the road to ensure safe separation. This scenario seems silly, but it essentially illustrates our current air traffic control philosophy.

Now, let’s contrast this scenario to how the Interstate Highway System actually works. Of course there are no control towers along highways across the country. They would not be necessary because each driver can precisely position and guide their own vehicle along their intended route. Paint markers, reflectors and divided lanes for traffic neatly organize the flow of vehicles and provide a tremendous amount of capacity.

In the same way, the modern aircraft has very precise navigation and guidance capability that can permit them to use defined air routes. When aircraft use this advanced technology to organize the flow of traffic, it is called Required Navigation Performance (RNP), and it results in a variety of substantial benefits. Airspace is being re-mapped around the world with RNP routes, or ’œhighways in the sky.’ View the infographic below to see how RNP reduces fuel consumption and CO2 emissions, saves airlines money and reduces flight time: 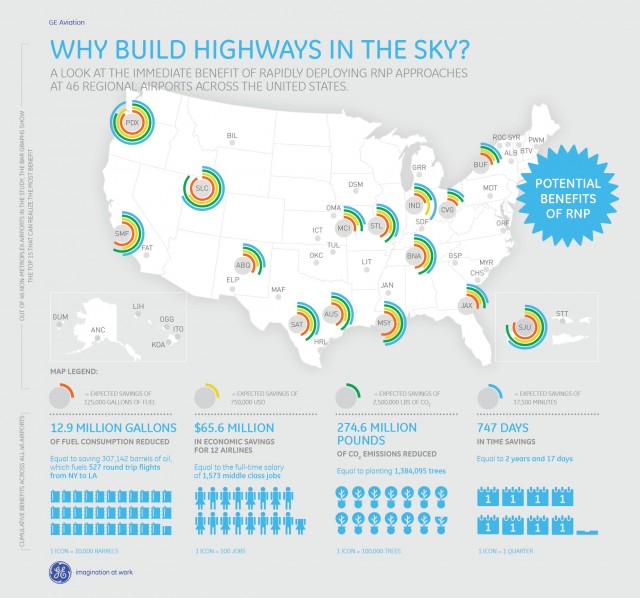 For the past 20 years I have been deeply involved in the development and expansion of RNP operations, which provides new routes in and out of airports with improved organization, predictability and efficiency.  These new routes can reduce fuel and emissions 5-15%, reduce noise up to 30%, improve airspace capacity and reduce delays, so it is important that RNP operations remain a priority for corporations and governments alike.

So what’s next? In May 2012, the FAA awarded a contract to ITT Exelis and GE Aviation to develop RNP routes at five U.S. airports over the next two years.  For the traveling public, this means that we are on the way to more reliable and enjoyable service with less noise and air quality concerns.

This is one of the best explanations I have seen of the future of Air Traffic Control. It is a vitally important upgrade in the system, and it is awesome to see such a simple, straightforward explanation of where the value is.

I was a project leader at the flight research institute when it was a non-profit offshoot of Boeing at the Museum of Flight in Seattle Washington. While there I discovered a way that it would be possible to fly without fuel by tacking in air only — what I call airSailing among a select few that I have discussed it with so far. I also know how to develop air traffic controlling far better using satellite modems. Two aircraft literally crashed overhead and fell on my street here in Newberg Oregon. The crash was far more the responsibility of the FAA for not using this better and cheaper technology rather than trying to monitor aircraft 35 miles away and over hills etc. There is a lot more that I would like to discuss. Perhaps we should discuss via Webex since it is encripted. Thanks. P.S. I was also the one person at Intel to whom all questions were eventually escalated to and I was the most senior software engineer at Freightliner and I was Intel’s technical liaison to the Ford and the Bausch Motor Company. I will reply with a resume and white paper when you suggest how we should do it and keep our discussion confidential. Thanks, Wayne German