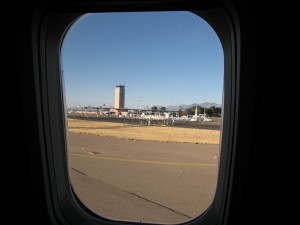 The tower at Tucson's Airport on Alaska Airlines Boeing 737-900

Since Alaska Airlines and I are both based in Seattle, I end up flying them quite a bit. That, of course is not a bad thing, since I love their combination of cheap fares, high level of service and all Boeing 737 fleet (okay, I guess Q400’s now too). Recently I flew from Tucson(TUS) to Seattle (SEA) in First Class on Alaska which I haven’t been able to do in quite sometime. Oh yes, I wish I could say I am a high roller, but this First Class flight came thanks to my mom and her Alaska miles. Heck, I will still take it.

The rock star benefits of First Class start before you actually get onto the airplane. Alaska only operates one flight per day from Seattle to Tucson, so they only have one ticket counter and gate. I was actually surprised to see they had their own gate and counter, since I have seen them use Delta’s at other smaller locations. It could be because TUS seems to have more counter and gate space than needed?!

I only had a carry-on but my mom had a bag to check. If we were flying economy, that would be a $20.00 charge, but in First Class, your first two bags fly with no additional fee.

When we arrived, the line at the ticket counter was long — very long. Like 20 people deep and two people working the counter. We had 2.5 hours before the flight took off, but this is where flying First Class kicks in. The First Class and MVP line had no one in it. Sure,  I feel a little bad “cutting” everyone just because I have a First Class ticket, but I sure as heck don’t want to wait in a long line. 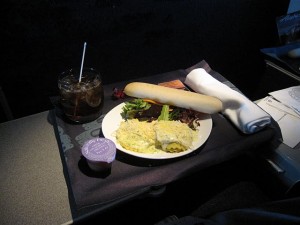 The food was filling and good and yes I took advantage of having free drinks.

The second benefit happens at the security check point. The airport doesn’t have much traffic, so there wasn’t much of a line. Since the main line was short and we had over two hours to burn before the flight, we decided to hang out with the economy folks instead of taking the First Class line.

While everyone else lines up at the gate to board, we lined up in the First Class line. Not having to wait in line and having to not worry about overhead space is a good feeling. It is hard not to watch as others board while looking happy about being in First Class.

When I fly First Class on most other airlines they will serve you a “real” drink before takeoff, but we were only offered water.  Not a huge deal; it is not that I need a little buzz before take off. Once we got in the air, the flight attendant came around and actually called passengers by name. That is right, we were called “Mr. and Mrs. Brown.” My mom made it a little awkward by pointing out we were mother and son, not cougar and boy-toy, but it just made the flight attendant laugh. I know many flight attendants are trained to call First Class passengers by name, but this is the first time I have seen it in action. It was a nice touch and takes the level of service to a whole new level.

We sat in 1D and 1F — bulkhead First Class. My mom likes this seat since she can be one of the first ones out and stretch her legs fully out. She is 5’3″ so this works for her, but I am 6’1″ so the bulkhead is actually worse for me since I can’t put my feet under the seat in front of me. Since we were in the front of the plane, I had plenty of room, but I normally try to avoid the bulkhead when sitting in economy. Plus, not having a seat back pocket to store my mini-laptop, camera and iPhone makes things a bit difficult as well. When I normally fly, I take the window seat, but my mom took dibs on the window and since her miles got me up to First Class, I didn’t complain (okay, I did a little bit — sorry mom). 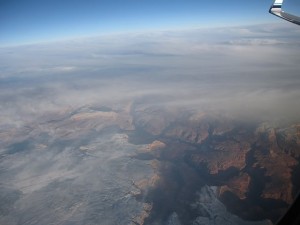 We got a nice view of the Grand Canyon during flight. Who could not love flying? Thanks to my mom for taking this photo.

The meal is what you would expect in a domestic First Class seat. There was salad, ravioli and a bread stick. Real glass, silverware and plates were used. The ravioli was good — not just airline-food good, but actually, food I would pay for in a restaurant good. Even though the larger seats make for great sleeping, I always try to stay awake when I am sitting up front so I can enjoy the experience. This flight wasn’t long enough to have free digEplayers for First Class passengers, but there was Wi-Fi available for only $9.95. Since the flight was about three hours and I was flying with my mom, I decided not to get the internet.

Another bonus of sitting in the front is you get to get off first. One of the downsides of getting off first is having to wait in baggage claim for your bag. But wait! Alaska has the deal, where if your bag doesn’t get to you with-in 20 minutes of the plane arriving at the gate, you get $20 off your next flight or 2000 bonus miles. My mom was actually excited about getting bonus miles, but we had our bag with-in 14 minutes of the plane hitting the gate — very impressive.

For those of you who are missing how flying used to be, do not worry, it still exists — up in First Class. You get top notch service, meals, no fees and treated like royalty by choosing to fly First Class. Of course, all this service comes at a price and you will end up paying more — just like you used to have to pay more for economy back in the “good old days.”