Recently, I received a press release email from my local airport, San Diego International. The title read: â€œEdelweiss to begin nonstop seasonal service between Zurich and San Diego.â€ Youâ€™ve got to love it when your local airport adds new service, but this time was a little different than usual. Normally, KSAN â€œnew serviceâ€ press releases involve Southwest or Alaska, and to places like Newark, Tampa, or Cabo San Lucas. Did this one really say Zurich? And who exactly is Edelweiss? For an airport that receives very little wide-body international service (JL to Narita and BA to Heathrow), this KSAN press release was big news.

Being a card-carrying #AvGeek, Iâ€™ve heard of Edelweiss but I canâ€™t say I know much else about them or what they do. In fact, my first thoughts when hearing the name werenâ€™t even related to the airline. 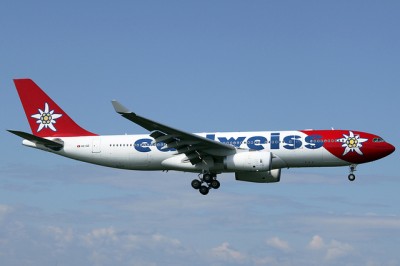 At first glance I was not sure if it was a flower or some odd nuclear atom on their plane. Either way, I kind of liked it. When taking a closer look at the Edelweiss Air, it became quite clear this was a flower.

The airline is named after the unofficial state flower — the Edelweiss. The airline was founded in 1995 with a single MD-83. In the late 90’s they introduced Airbus A320’s and Airbus A330’s for longhaul flights. The airline flies from Switzerland to destinations in the Mediterranean, the Canary Islands, the Caribbean and the Maldives. They also fly to locations in Africa, the US, Asia and Europe.

In 2008 the airline was bought out by Swiss International Airlines, which was bought by Lufthansa in 2005. Even though Edelweiss is owned by Lufthansa, it is still independently operated. They currently have no aircraft on order, but did just take delivery of their first Airbus A330-300 on January 16, 2011.