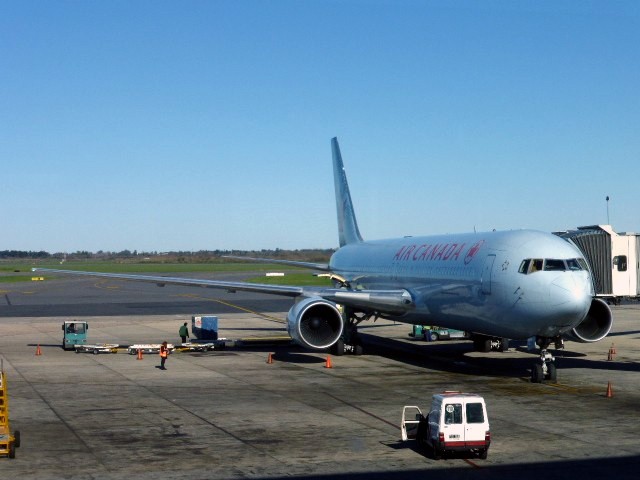 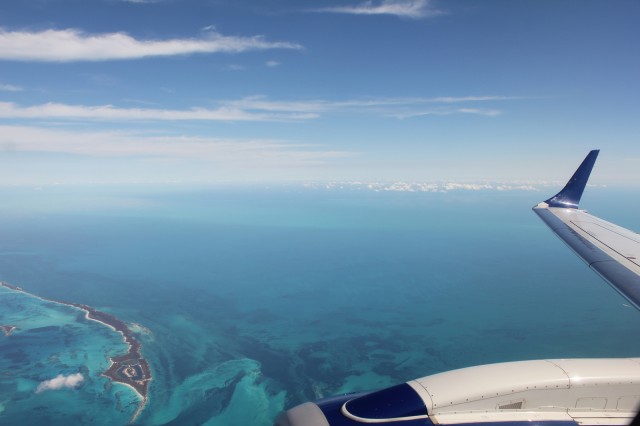 The Bahamas puts the “blue” into JetBlue.

Cheers: Great little bonuses: full soda can, free TV, lots of snacks and one free checked bag.
Jeers: Wish there was some Wi-Fi — it is coming soon.
Bottom Line: JetBlue does not feel like a low-cost airline 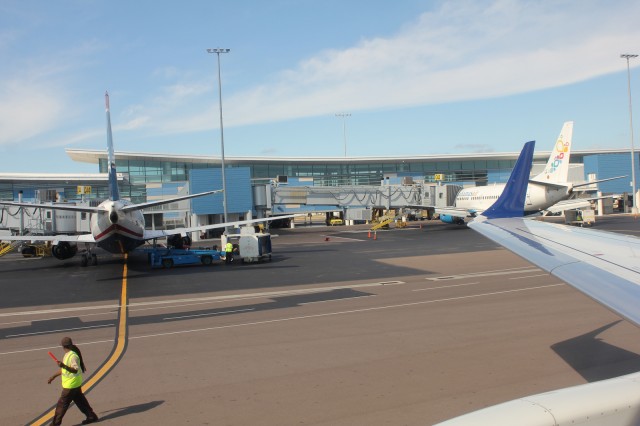 Taxiing at NAS towards the runway. There is a Bahamasair Boeing 737-500 in the background.

FULL JETBLUE ECONOMY REVIEW:
Being based in Seattle, I do not get the opportunity to fly JetBlue very often. It has been a few years since I have experienced one of their flights and I was excited to see I was flying them home after a recent press trip to The Bahamas (note: The Bahamas Tourism paid for my ticket on JetBlue).

I have only flown the E-190 once before in a business class flight on Air Canada from Toronto to Seattle. I was impressed with the larger seats up front on my Air Canada flight, but I have been wanting to try out what it is like sitting in the back of the E-190 and this flight gave me the opportunity.

JetBlue E190s are configured with 32″ seat pitch, but if that is not enough for you, then you can upgrade to Even More Space, which gives you (wait for it…) even more space. Rows one, 12, 13 and 14 offer 6-7 inches of additional space and give priority boarding for an extra charge. The aircraft is set up in a 2-2 layout with 100 seats — this means aisle and window seats for everyone. 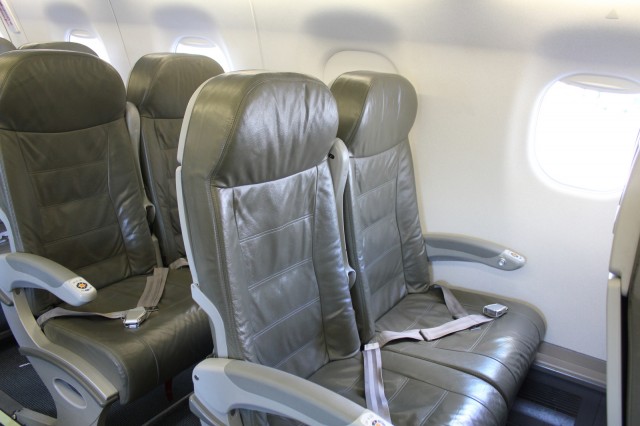 The E-190 provides a window or aisle seat for every passenger.

The flight was only about half full, so after allowing passengers with Even More Space seats and those who need additional assistance to board, everyone else was allowed to board in one group.

I normally try to take photos of the aircraft before I board, but NAS does not offer great photo angles from the airport. However, the photos after take-off more than make up for it.

The overhead bins on the E-190 are not too large, so I planned ahead and checked my larger carry-on bag. Extra bonus: JetBlue allows you to check one bag for free. Was kind of a pain to haul my camera, laptop and chargers around Boston (where I had my layover), but I managed.

No matter what seat you are sitting in, you will get free TV with 37 channels of entertainment. There are also three additional channels that play movies and for international flights (which mine was), the movies are free. If you are on a domestic flight, the premium entertainment will cost you $5.99 to watch a movie. Make sure to bring your own headphones or purchase one for $2 once you board the aircraft, because the movies start shortly after leaving the gate. I made the mistake of waiting to buy after taking off and I missed 10 minutes of Batman: The Dark Knight (luckily I had seen it previously). 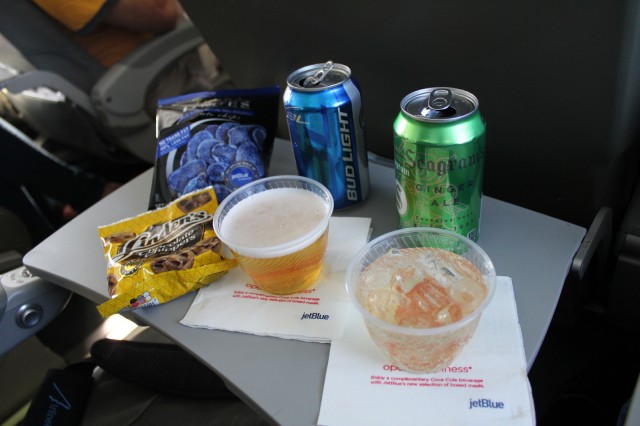 I paid for the beer, but everything else was free and good.

If you want something a bit more substantial, four different “EATUP boxes” are offered for $5.99 each. There is also a decent selection of alcoholic beverages for $6.99 each, except for Bud Light which goes for $5.99. Being a fiscally responsible travel blogger, I went for a few snack selections and the cheaper beer.

If you have money burning a hole in your pocket, you can also purchase a head pillow for $5.99 or a blanket for $4.99 that you get to keep. Make sure to bring a credit or debit cards, since JetBlue does not accept cash. 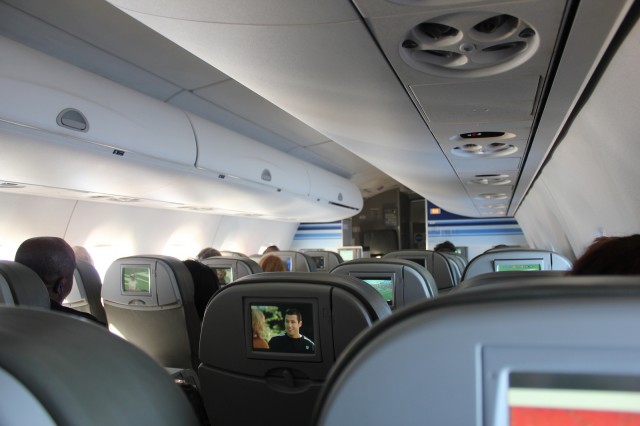 Each seat has its own TV with free entertainment.

It was very easy for me to work on my laptop, while watching TV, which is not something I can say on other domestic products. It also helped that the seat next to me was empty. 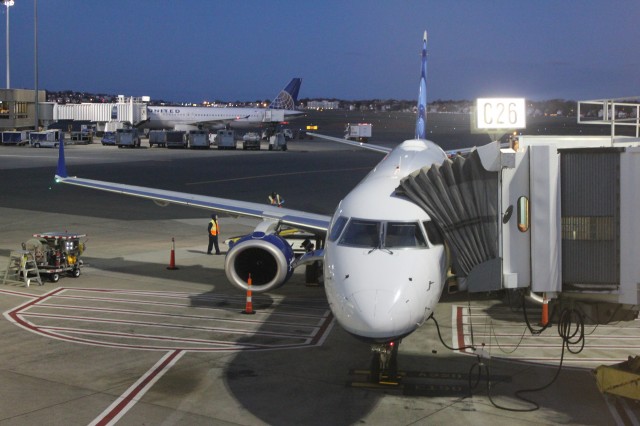 I had to take this photo in Boston, since NAS did not have any place to take a photo.

Since NAS offers pre-clearence for US Customs, I was able to quickly catch my connecting flight from Boston to Seattle without having to go through much hassel.

What would make the flight more enjoyable would be Wi-Fi. The airline is staying pretty quiet about their game plan, but are publicly stating that Wi-Fi should start showing up in JetBlue’s fleet starting in “early 2013.” JetBlue is planning to provide a Ka-band satelite solution through their own subsidiary, LiveTV.

I have to say that I really enjoyed the E-190/JetBlue combination and can’t wait for my next flight on either.

Cheers: Cookies made fresh on the plane served with ice cream — double cool.
Jeers: Wish there were more options with the in-flight entertainment and OMG that lavatory is unreal.
Overall: I was impressed with my first Air Canada and E-190 flight.

Oh here is my Air Canada E-190 leaving Toronto. You true airline geeks will know that is a lie. This is actually an Air Canada E-190 I caught while in Montreal -- there were no good shots of mine at Toronto, so I am kind of cheating here.

Anytime I have an opportunity to fly on an new airline or new aircraft type, I get excited. So, the fact I was flying on a new airline AND new aircraft type made me a bit giddy. I was able to  fly from Toronto (YYZ) to Seattle (SEA) non-stop on an Air Canada Embraer E-190 in Executive Class and of course I wanted to write up a review. (disclaimer: The cost of the flight was covered by a TV production studio, for work not related to Air Canada or Embraer).

Since I had a premium ticket, I decided to head to the airport early to try out the Air Canada Maple Leaf Lounge. The lounge was very spacious, had the amenities that one would expect (including showers) and offered a comfortable atmosphere. The choices of food was a bit skimpy, but holy smokes I have never had such delicious broccoli soup.

Where the food might have been a bit lacking, it was made up for in drink choices. The Maple Leaf lounge had a nice array of hard liquor, beer and coffee choices. It was probably the most impressive drink set up I have seen in a lounge without actually having a full bar. 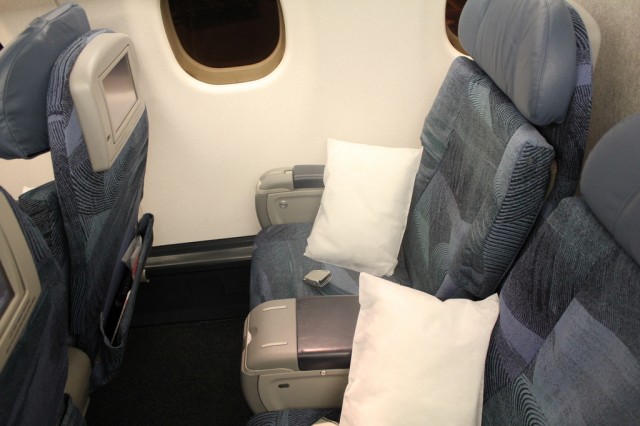 Air Canada's E-190 has a 2:1 layout in Executive Class. As an extra bonus, I had no one sitting next to me.

When it came time to board, the process went very smoothly, mostly because the flight was not very full. I was a little worried how small the E-190 overhead bins might be and since I was able to check a bag for free with my Executive ticket, I just decided to check my bag. I found it wasn’t really needed and would have had no problem putting it in the bin — oh well.

The Air Canada E-190 has a 1-2 layout in Executive class and 2-2 in economy. I was wondering how a premium seat would feel in such a small aircraft and I was actually pretty surprised. I was hoping to try sitting on the side with only one seat, but I ended up in 3F, which was a window on the 2 side. It worked out since I had no one sitting next to me.

I had plenty of leg room and seat width — even if there would had been someone next to me. I was quite impressed with the size and shape of the windows of the E-190. Height-wise they are perfectly located for my 6’1″ frame and their width makes it easy to look out. 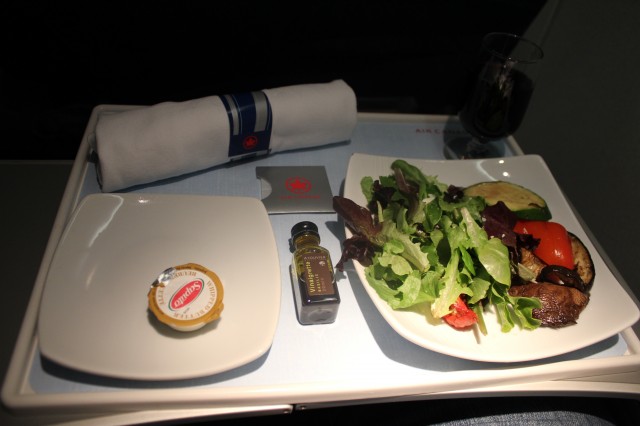 The salad. I probably should have waited for my bread (which did come shortly), but I was too hungry so I took the photo and ate.

Upon boarding I was greeted by my last name — before they even noticed I was in Executive Class. Prior to the door being closed, we were given menus to choose between chicken, salmon and veggies — I decided to go for the chicken. We left a bit late, due to the flight arriving late, but we had a short taxi and took off quickly due to having a light load. Shortly after take off, it was time to dine.

After my salad I was served pan-seared chicken in Parmesan cream sauce with seasoned mixed rice, carrots and edamame (yea I kept the menu as a souvenir). The food was decent and filling, but the best part was desert. There was a choice of oatmeal raisin or dark chocolate chip cookies that were made on board the aircraft and served with vanilla ice cream. Fresh baked cookies and ice cream while cruising at 35,000 feet is always a nice treat.

Another nice touch were the swizzle sticks served with the drinks (see last photo). It is more than just serving the sticks, but the fact that they have the maple leaf up top. This is really a lost art that one does not see much anymore. Sure, it is not a huge deal, but little details like this makes you think that the airline cares about the little details. 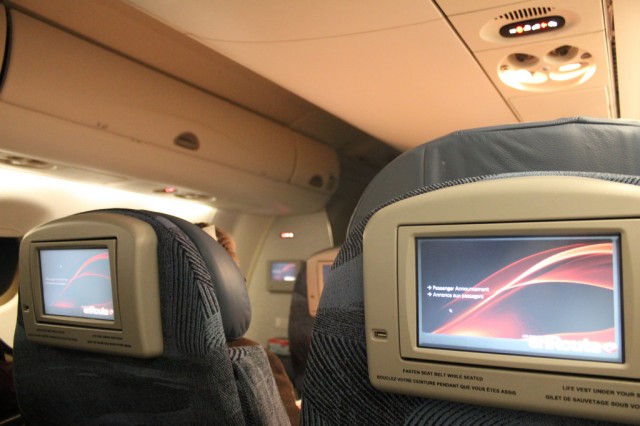 I wish there were a few more options with the entertainment system.

I test the room of a seat by being able to have a drink, a snack, writing on my laptop and being able to watch a movie. Of course having an empty seat next to me really helps, but even with a seatmate I would have been able to do everything successfully.

If you do not fly much and are only taking one long flight, the in-flight entertainment would probably work out alright. However,  if you are looking for plenty of options, this one will most likely disappoint you. There were some nice selections that kept me entertained, but if I would be flying back to Toronto, I would have probably run out of things that would interest me.

I was also not too fond of the front lavatory. Well, that is probably putting it too lightly — that lavatory was the worst one I have ever been in. It had nothing to do with the upkeep, but the size. Not to go into too much detail, but for me to use the restroom I had to bend my head down and contort to make things work. If it were turbulent, I think I might have had some real issues. 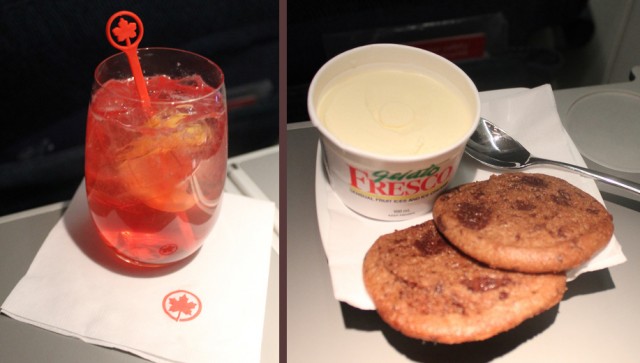 Swizzle sticks totally rock. So do cookies and ice cream.

I kept wanting to think of the flight as a domestic one, even though it was technically international. Looking at the E-190 as a shorter route domestic aircraft, it does pretty well. However, it did seem a bit out of place for such a long flight and really Toronto to Seattle is about the limit that the E-190 can operate.

For a shorter, domestic flight, this was a nice product and high-end experience. As an international experience, it comes up a little short. But in all honesty, this route and product should be seen as domestic. My Air Canada experience back to Seattle was leaps and bounds better than the economy red eye I took to Toronto where I had to change planes in Chicago.