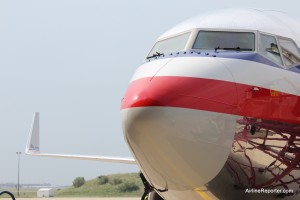 When arriving at DFW, the sky was mostly blue and it was sunny. Things changed quickly.

It is obvious right? Being stuck at an airport because of delays or a cancelled flight is no fun. Recently, I had a fun little experience in Dallas after flying from Seattle (out of BFI) to Dallas (DFW) for American’s delivery flight of their first Boeing 737 with Sky Interior.

The delivery flight arrived at DFW about 4pm and my flight out wasn’t until 9:15pm. I took my time to get over to the terminal (our flight ended at a maintenance hangar) and since I had the time, I decided to wait stand-by for the earlier 7:30pm flight. I sat enjoying my window view, when all of a sudden alarms and warnings started to come over the speaker system.

“There is a severe weather pattern coming towards the airport. Everyone must go to the center of the building and away from any windows.” This was followed by talk of tornadoes and reassurance this was not a drill. It became obvious the airport meant business.

Some passengers bolted to the bathrooms, which were severe weather areas, and others couldn’t care less and had to be told by employees they must move. I decided to take the middle ground and figured it was a good time to go get some food, which happened to be in the center of the building. While enjoying my airport food (okay, enjoying might be a bit strong), we all started to hear very loud noises in the terminal. Large hail started to fall, making disturbing noises on the ceiling. People who were on planes had to be escorted off back into the terminal.

I couldn’t see outside, since I  was away from the windows, but looking at news reports, there was hail the size of baseballs in the area. Love Field (also in Dallas) reported a tornado that touched down near the airport. After things calmed down about 30 minutes later, the 7:30 flight I was on stand-by for had an updated departure time of 9pm. My original 9:15pm flight still showed as “on-time.” I was #5 on the stand-by list, so decided to ditch my attempt for the earlier flight and started my trek from Terminal D to Terminal A.

DFW has a really slick train system inside security to quickly get passengers to any of the terminals. Unfortunately it does not run during severe weather, so I had about 45minutes to hoof it through the airport. I kept checking screens and flight 1575 from DFW to SFO kept showing “On-Time” as other flights slowly changed from “On-Time” to “Delayed.”

When I made it to the gate at 9:00pm, the flight still showed ready to go and that is when they announced the flight had been diverted to Houston due to weather. American started checking planes that were parked at DFW for damage and realized there were quite a few planes with damage and started cancelling flights. However, the few flights that had their aircraft diverted were still showing as delayed and not cancelled.

A little after 10pm American Tweeted:
“All AA and Eagle operations @DFWAirport are suspended for the remainder of the night due to #storm activity. Appreciate your patience.”

Hmm. That caused a bit of confusion. I tried to tweet to @AmericanAir to get clarification, but they were unanswered and people at the airport kept confirming that our flight was still a go.

Thousands of people at the airport lined up waiting  for hours to get re-booked on flights the next day. Those of us on the SFO flight felt a little bad that our flight was still going when so many were being inconvenienced, but were happy to have our flight. With all the stranded passengers, hotels quickly filled up and it didn’t take long for all the cots that DFW provided to disappear as people started to set up camp.

Even with all the chaos, I have to say that American did a great job keeping us informed since our departure time kept being pushed back. A little after midnight, we were informed our plane was now coming from Oklahoma. I jumped on FlightAware.com and found our aircraft and quite a few others in-bound to DFW from Houston and Oklahoma. Our plane finally arrived a bit before 1am. People already started gathering around the gate ready to get on board as soon as possible. We were told it would take about 20 minutes to clean the plane and off we would go to SFO — finally.

There were a few empty seats on the flight and the gate agent started calling up people from the very long stand-by list. The flight was set to leave at about 1:30am, meaning we would arrive at 3:30am. I started figuring out how little sleep I was going to get, when we got the announcement:

“I have bad news…the plane is here, but we have no crew and American is cancelling the flight.” People reacted like they were just told they had an incurable disease. Some cried, others yelled. I couldn’t help but be a bit angry myself. I had been waiting for nine hours for this flight, while watching thousands of others get re-booked on flights and make hotel reservations. What kind of chance did we have to get on any decent flights to our destinations?

That poor gate agent. He had to know the news wouldn’t be taken well. After the announcement, two guys came storming up and just started yelling at him. I guess the cops had to be called over, but I wasn’t sticking around. 160 people just found out their flight was cancelled and most started lining up at the gate. I headed down the terminal to find a shorter line and luckily found one.

At this point I knew I wasn’t going to make it to SFO in time for an event I had scheduled, so now it was time to try to make it back home to Seattle.  When I told the agent that I wanted to get to Seattle, the agent next to her looked over and said, “Good luck with that!” Sigh.

I have to say the agent I worked with was a trooper. She obviously was working way past her hours for that day and has dealt with many upset folks. Even though I was tired and frustrated, I tried to be as polite as possible. At first it looked like I might be stuck at DFW for a day and a half, but after some creativity she got me a flight to Orange, CA (SNA) on American and then to Seattle on Alaska — sweet.

Cots were gone and I heard rumors that people were having to go way out of town to get a hotel room. My new flight wasn’t leaving until 2:40pm — over 12hours later. Luckily, the airline gods were smiling on me. While at the counter a nice elderly gentleman was standing next to the counter. He was turning in a hotel voucher since he decided to camp out at the airport. I asked if I might have it and she gave it to me — for the first time in a long while, things were looking up.

Since this was a weather-related incident, American wasn’t picking up the tab, but it did guarantee a room and at a discounted rate. After calling to confirm there was a room (only one left) and hailing a cab, I was settled into my room by 3am.

It was a very long and frusterating day, but I fell asleep with a big smile on my face. I had the ability to take a shower and a nice comfy bed to sleep in and that was more than most people in my same situation could say. Cancellations are not fun for anyone, but they are part of the huge transportation infrastructure we have in America. Even with the weather causing the issues, I heard so many people blaming the airline. Do they really think that American wants to cancel flights? Keep their employees up extremely late and lose a bunch of money? Heck no. I was disappointed that I was missing my planned event, but I had to stop and realize it could have been worse. People at the airport I was talking to were missing bigger things like a wedding and even a funeral. 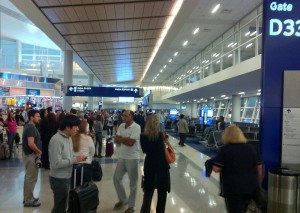 Passengers get away from the window during tornado warnings.

Yes, with our flight, American dropped the ball. They should have known there would be no flight crew and just cancelled the flight hours prior to give us all a better chance. Even while placed in a difficult situation I had to keep reminding myself that the airline business is extremely complicated and when an airline’s main hub gets shut down and you have people managing thousands of passengers, crew and employees, obviously some things will fall between the cracks. Airlines do not have the ability to be fully staffed at all times just in case situations like this occur.

With all the weather issues and thousands of flights each day, it is pretty amazing this doesn’t happen more often. Yeah, it might have taken me almost a day and a half to get home, but it is still better than driving. Just because I might love the airline business, doesn’t mean I have to love every aspect. Luckily experiencing cancellations like this is a rare occurrence.

Have you had an interesting cancellation story? Did an airline really go out of their way to help you? Or hurt you? Please share in the comments.