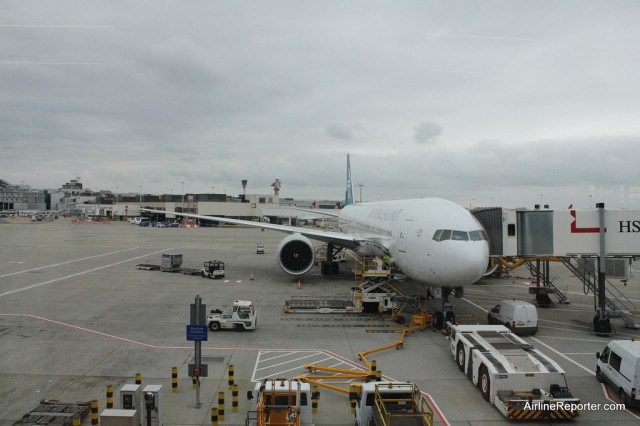 A glorious grey sky in London.

Cheers: The fact that I slept through most of the flight is probably one of the best reviews possible.
Jeers: I want to see out the window.
Bottom Line: It is confusing to figure out if this really is a Business product or First Class. 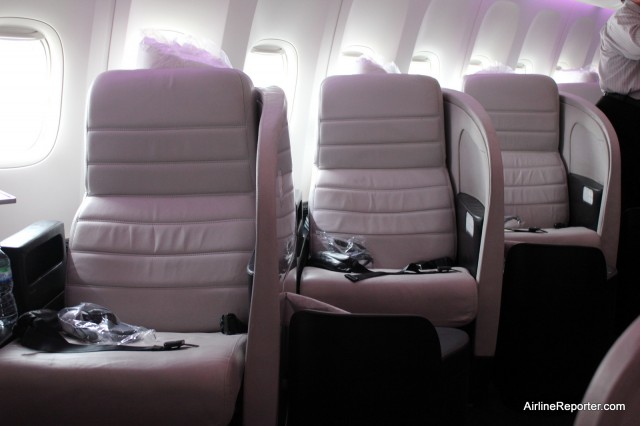 The “window” seats face away from the window, which isn’t so great for AvGeeks, but does provide more privacy.

Earlier, I posted my experience flying Air New Zealand’s Premium Economy from LAX to LHR. I was impressed with the product and was looking forward to how their Business Premium would compare (note: the airline covered my airfare and I paid the taxes). There are many similarities between Premium Economy and Business Premiere, but there are also key differences. Both can check-in at a priority line, get free alcoholic beverages and priority boarding. The extra money spent to upgrade will get you lounge access, premium wines on board, additional food options, a larger screen (10.6″ vs 12.1″) and a fold flat bed.

This was actually my second flight on Air New Zealand’s Business Premier, but only my first “real” one. My previous experience was taking the airline’s first Boeing 777-300ER from Paine Field down to Los Angeles, which was only a 2.5hr media flight. I was happy to try out the product in a “real world” situation and I had a good 10.5 hours to do it. Are the extra features and product worth the ticket premium (or miles)? I think it depends on how you want your flight experience to go. 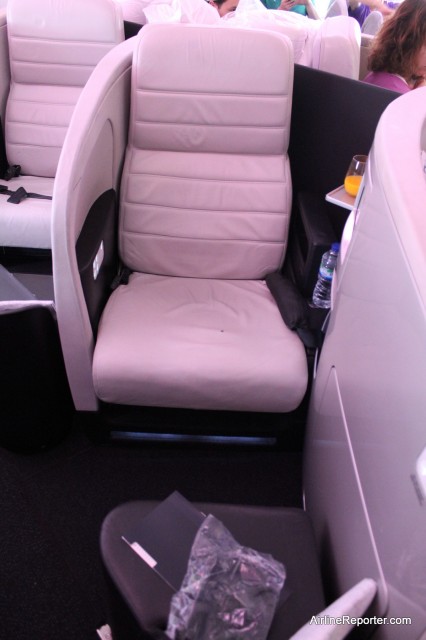 Each seat has quite a bit of privacy for its occupants.

When first walking into the cabin, it is obvious that the Business Premier class is an upgrade. Instead of a 2-2-2 layout in Premium Economy, Business gives you a 1-2-1 layout, but really it feels more like a 1-1-1-1 set up since you are so isolated.

If you are traveling with someone else, you won’t be able to easily interact while sitting in your seat, but have no worries. The seats easily allow two people to sit and talk at the same seat. This isolation also gives every passenger access to the aisle, which means you don’t have to crawl over someone while they sleep to use the bathroom.

Each of the seats is angled to give passengers extra privacy. The biggest downside is not being able to look out the window with ease. Where the Premium Economy seat actually tilts you towards the window, the Business Premier tilts you away. Although I enjoy looking out the window, I much rather have the privacy and space, since the windows are shut after take off anyhow. 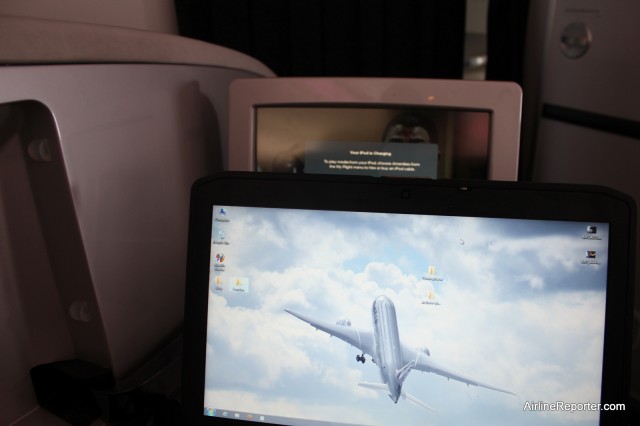 A larger laptop on the tray table gets in the way of the entertainment screen.

Now, the purpose of my flight was to check out the product, but I ran into a big problem… I fell asleep… for over six hours. That might be one of the best compliments when reviewing an airline’s product, right?

At first I was a bit confused about the seat. I kept hitting the recline button, but the seat would only recline so far. Turns out, it is one of those seats where you have to get up and fold down the bed. What a great Airline Reporter I am, not paying attention and thinking my seat was broken for a few minutes — oh well.

Yes, it takes a bit more of an effort to convert your seat into a bed, but I think it ends up being worth it. Once you have your seat folded forward, you are able to put a memory foam mattress on top. Then add the fluffy duvet and full size pillows and you are ready for a good night’s (or day’s) sleep. If you have any trouble or want some help, just hit the call button and the flight attendants will have no problem assisting.

I had plenty of room to roll around and get into multiple positions. If needed, I was given an eye mask to block out the light, but I didn’t need it. The soft glow of pink lighting was perfect for setting a sleeping mood.

This broke a record for me, since previously, the longest I have slept on a flight was four hours straight. I wasn’t even that jet-lagged, since I had a week in London and was more or less caught up on sleep. Oh well. That still gave me four hours to check out the product, food and drinks. 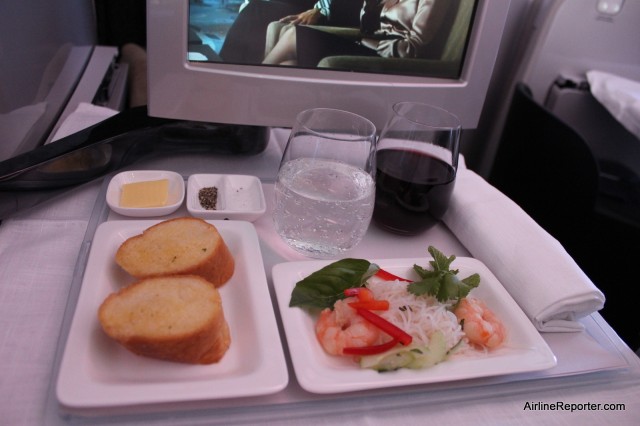 My dinner starter: prawns. I think I am watching Up in the Air here.

The meal service started shortly after take off (and before I went to sleep). I decided to watch the movie, Up in the Air (it seemed appropriate) and enjoy my meal. I started with coconut prawns with rice noodles and plum sugar dressing. Then I had a choice between lamb, salmon, chicken or eggplant. I decided to go with the lamb that was on cabbage and potato mash with field mushrooms and minted yoghurt. All amazing.

Then I finished it off with a little vanilla and chocolate ice cream. On my previously flight, dessert was served with the appetizer, which was a bit odd for me, but this time, it came after the meal with some dessert wine.

When I woke up, the cabin was still in sleep-mode and I was thirsty. I was able to fire up the ‘ol in-flight entertainment system and order from a nice selection of food and drinks. I decided on some Diet Coke and sparkling water. The cool part is I was able to customize how my drink was served. Why, yes, I will take ice in both and a lemon wedge in my water. Less than a minute later, my drinks were delivered.

Near the end of the flight, we were served a second meal, which was quite a bit lighter. I had a choice of smoothie, fruit, wraps or scones. 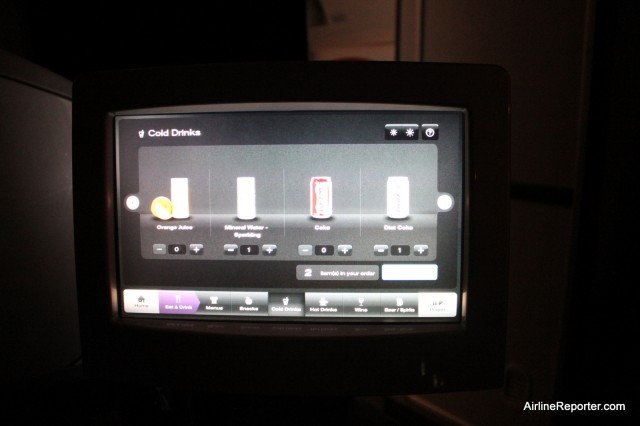 Ordering additional drinks or food during non-meal service is quick and easy.

When I received my ticket to fly, the Business Premiere section was filled. I was hoping to get a window seat, but there were none left. Even after checking multiple times before the flight and again at check-in, there were still no other seats. I would have preferred not sitting in the first row, since many times, when my feet were up, the curtain would hit them anytime anyone passed.

So, is upgrading to Business Premiere worth the additional money over Premium Economy? Well, that depends. If you need to sleep well, there is no question that it is worth more. However, if your game plan is to stay up the entire flight and maybe talk to the person next to you, then maybe Premium Economy will do what you need.

But the fact that on average, Business Premiere seats cost $4000-5000 and Premium Economy cost $2000-$2500, that is not a bad deal. Especially when you compare these products to other international seats that cost much more. If you are a person who has the ability to either pay or use miles to upgrade to the front of the plane, it will be hard to find an upgrade per dollar that gives you this good of a deal.