Computer generated image of an American Airlines Boeing 737, 787 Dreamliner and 777. It is fun to see the 787 in metallic finish, but the composite body would not make that possible. Image via Boeing.

I spent a nice chunk yesterday evening trying to get through all the recent information on American Airline’s record breaking order of aircraft. My first big question is why would an airline that lost $286million during 2nd quarter 2011, look to spend so much money on new aircraft? Airlines that lose money is not a new concept, but at a time when most airlines are raking in profits, American is still stuck in the red. The airline obviously needs to do something drastic and they are hoping that updating their fleet will achieve their goal. It seems like this is the correct direction, but there is much more than new planes needed to survive.

In case you missed it, American Airlines announced the purchase of 460 new aircraft, which is the largest single order in history. This will include 260 Airbus and 200 Boeing aircraft. I assume that the folks at American have run the numbers and found that with the expected cost of fuel and maintenance of older aircraft, it makes more sense, long term, to operate newer aircraft. It is likely that American had a huge advantage working Boeing and Airbus against each other to achieve the best pricing and they have beat Delta Air Lines and United Airlines to the punch of updating their fleet. In fact, American expects to have the newest fleet of all major US carriers in just five years, which is an impressive feat knowing that their average age of aircraft today is about 15 years.

According to Boeing’s press release, American was offered a 737 re-engine option that has not yet been approved by the board of directors. “In addition, American Airlines has committed to order a variant of the 737 featuring new more fuel-efficient engines, pending final airplane configuration and launch approval of the program by the Boeing board of directors.”

If approved, American wouldn’t be the only one interested in a re-engined Boeing 737. Flight Global quoted, Bill Ayer, CEO of Alaska parent Alaska Air Group, during an earnings call yesterday as saying, “We are very much in favor of lower fuel burn, and if Boeing can do this sooner rather than later, that’s a good a thing.” Alaska Airlines operates a fleet of only Boeing 737s.

Southwest Airlines is another all-Boeing airline based in the US and Brad Hawkins with corporate communications told AirlineReporter.com, “We, of course, have frequent dialogue with our partners, including Boeing, but we don’t disclose the details of those conversations unless we have an update to share.” I think it would be obvious that Southwest would like a plane with better efficiency to start replacing their large fleet of older 737-300s and 737-500s.

Computer rendering of an Airbus A320 in American Airlines livery. Notice the flat gray paint. Image via Airbus.

It seems the bottom line here is survival. American knows that gas isn’t going to get any cheaper and continuing to operate fuel inefficient aircraft is not going to be sustainable. However, survival is going to take more than just new aircraft.

One of the first things I thought of with such a large order is, “livery change.” When I posted how I wasn’t a huge fan of the current American Airlines livery, I got a lot of backlash. It seems that either folks love the current livery or feel it is aged and time to go. If American is looking to modernize their fleet and move into the future, I think they need a livery to match.

Yes, it is unique design, but it just looks aged. Then add the fact that the Boeing 787 Dreamliner (which American has 42 on order) won’t work with American’s bare fuselage livery due to the composite material and you have a great opportunity to change livery. I think painting the aircraft with a metallic silver base paint with updated, swooping, red, white, and blue lines could look slick. Then add a single color AA Eagle to the tail and you have yourself one nice looking livery — with ties to the past. Going with a flat gray paint scheme was done with the Airbus A300 and it looks better than the patchy A300 with bare metal, but still not a modern looking scheme. When I asked American about the possibility of a new livery they stated that, “Those decisions have not been made yet. That said, we do have to determine how to paint the 787. Obviously, we have to determine and make that decision well before the actual delivery in 2014 since painting is part of the manufacturing process.”

With the retro-fitting of new interiors, the addition of the Boeing Sky Interior on their new Boeing 737-800s and new aircraft on order, American Airlines appears to be making a genuine effort. They have also been working to improve their interaction with customers via  Facebook and Twitter, which helps them connect with the younger (and more hip older) passengers. They still need to tackle their problems with having a lot of debt, not making a profit and labor cost disadvantage.

After the order was announced, there has been a lot of criticism of American not buying all US built Boeing aircraft — accusing the airline of being un-American. That seems a bit mis-informed since we live in a global economy and trying to make the best deal to earn the most money possible sounds pretty darn American to me. United and Delta, who are the world’s two largest airlines, both operate both Boeing and Airbus aircraft. Not to mention that Air France (Airbus is headquartered in France) operates a fleet of over 80 Boeing (including cargo) airliners.

Be sure to also read:
* Jon Ostrower, on his blog Flight Blogger, posted an informative story on all the numbers relating to this deal and some are a bit surprising.
* Brett Snyder, on CrankyFlier, takes a detailed look how these new aircraft will more than replace the aging MD-80, Boeing 757 and Boeing 767-200 in American’s fleet. He theorizes that American might be looking to replace some smaller aircraft currently flying with American Eagle with larger Airbus A319 and Boeing 737-700 planes. 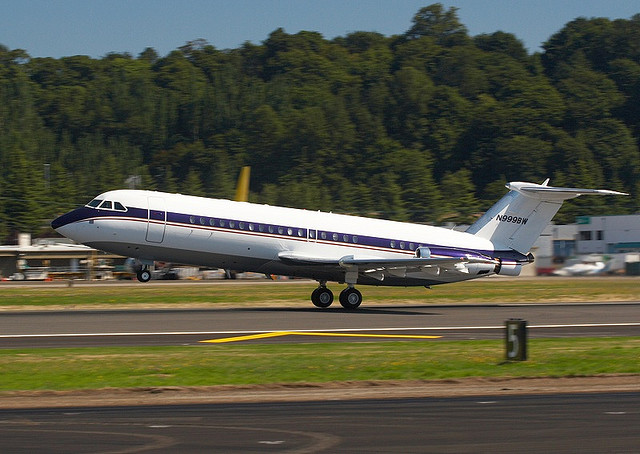 Ah, the good ‘ol days of flying. With loud aircraft that sucked one heck a lot of fuel. For the true airline geek, who cares about either of those? If you are looking for a unique opportunity that doesn’t come along often and you have $880.00 burning a hole in your pocket, do I have some information for you. I caught on Brett Snyder’s Cranky Flier blog that one young gentleman is not just talking the talk, but he is also walking the walk of bringing a classic airliner experience to fruition.

Recently, Classic Jet Tours was created to give aviation fans a chance to get a ride on classic, but FAA-certified aircraft. From their Facebook page, they explain the tours, “consist not only of the flights themselves, but also allow our customers to walk around the aircraft on the ramp, visit the cockpit, talk with the pilots, and socialize with like-minded aviation buffs.”

In August 27th, they are offering a flight on a BAC-111. The tour will start at 9:30am from Dallas Love Field and the flight will last two hours. There are only eight BAC One-Elevens that remain in service around the world, so there won’t be too many opportunities left. The aircraft in question, N999BW, is in executive configuration and ready to give a true VIP experience. The cost might be a little steep for most (including myself), but it has to be worth it to a true BAC-111 fan.

You can find more information, see photos and register for the flight at their website. I wish them the best of luck and hope to see more opportunities like this in the future.