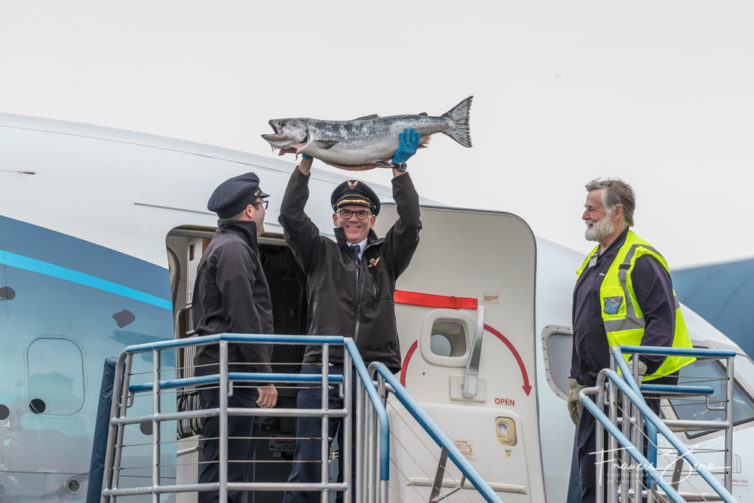 â€œThis story again? It feels like Groundhog Day,â€ Blaine Nickeson, AirlineReporterâ€™s Associate Editor (and my good friend) said to me via email when I forwarded the fact that I was going to cover the arrival of the first Copper River Salmon for the eighth year in a row. He just doesnâ€™t get it. Maybe you donâ€™t either, but I am going to try to explain why I look forward to getting up at 3:30am to welcome some fish to Seattle. 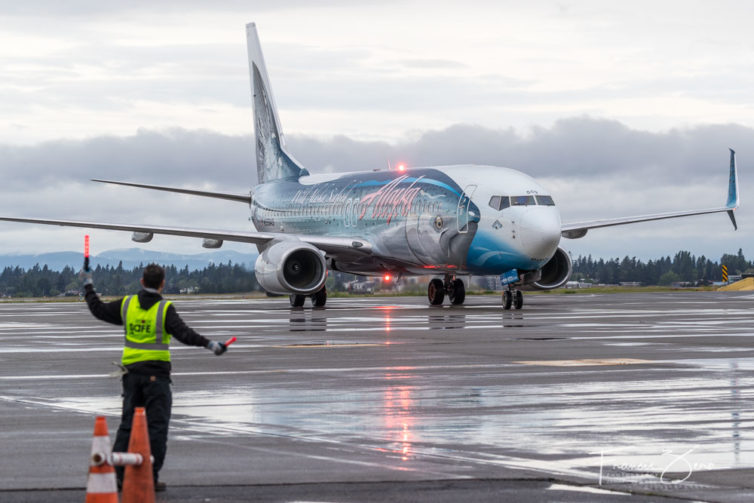 No question the best year was when I was able to fly up to Cordova, Alaska (on a milk run, in a 737 Combi), watch the fishing boats go out, see the â€œwinningâ€ fish be chosen, fly to Seattle with the said fish to the welcome crowd, and then eat the fish after it was cooked up by three fancy chefs. I think that experience really helps me better appreciate what it takes to get from ocean to tummy (like farm to table, but better).

Even with this year having no flight north and no fancy chefs, it was still awesome and I love going. When I reached out to Francis (who writes for us and is an amazing photographer) to see if he wanted to go with me, he was more than excited to come. Upon seeing Blaine’s anti-fish comments, Francis replied “for some reason I canâ€™t stay away, either.” Blaine was hoping for a different angle for this year’s story… I think I found one my friend, but not sure how you are going to feel about it! 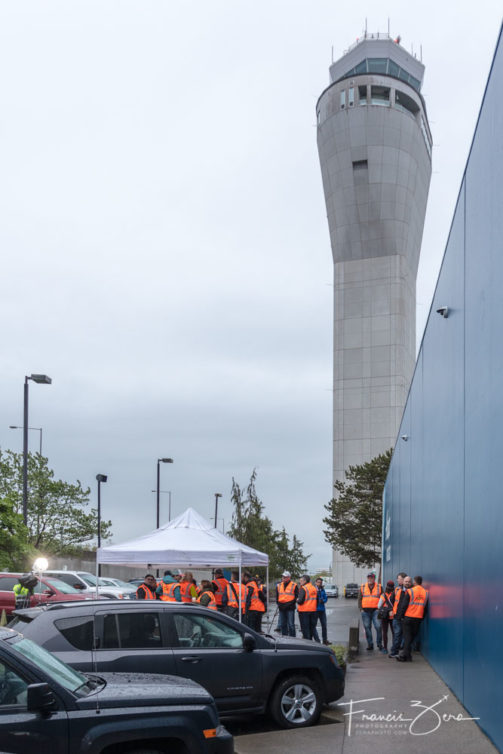 The tower and media waiting for the plane… in the rain

First off, this is not really just about the fish. Don’t get me wrong, Copper River salmon is delicious. I know some of you will comment each year that it is just marketing hype and nothing special, but I am not so sure about that.

For me, it is almost magical to think that family fishermen went out just hours before to the sea to catch fish, they are processed, put into the belly of an airplane, and then in your belly. I think the fact that the delicious cargo comes from a small town in Alaska (Cordova), which relies on air cargo for its economy, makes it all that much more special. If the plane was just flying in widgets from Omaha, that for sure wouldn’t be worth getting up at 3:30am.

Another reason why I love this event are the people. Each year I see some of the same folks from Alaska and other media outlets. Heck, it was even a nice excuse to hang out with Francis. I email and edit the stories of our writers, but I don’t get to see them too often in person.

Of course I also look for any excuse to put on one of those orange vests. Not just because I look so darn good in neon orange (doesn’t everyone?), but also it means we get to go somewhere cool!

The best part of the yearly event is being escorted out to the Alaska Air Cargo ramp and wait for the plane to arrive. Some years it has been a combi, others a cargo plane, but this year, it was something very special — the Salmon-30-Salmon. How meta to be delivering a salmon in a salmon.

It doesn’t matter how many times you see a person roll out a red carpet for a fish, it never gets old. Then the pilot raises the first fish of the season over their head. It is just the first of many. Heck, that day alone, 18,000 lbs of Copper River salmon was flown to Seattle (some staying, many continuing on to other destinations) and last year, Alaska flewÂ  a whopping 14million lbs of seafood altogether. To be honest, I am not even that much of a seafood fan, but I just love being a part of something so huge.

.@zeraphoto and I are waiting for the first Copper River Salmon to arrive with @AlaskaAir. Yes, I am wearing fish socks. I am not 100% sure they are salmon, but close enough. pic.twitter.com/DPoaHwEeP1

And if all of that is not good enough for you, Blaine, how about the fact that this gave me the PERFECT opportunity to wear my fish socks. My mom got them for me for Christmas (don’t judge me or my mom please and thanks) and I really haven’t had the right occasion to wear them. I think they might be trout and not salmon, but who really cares? 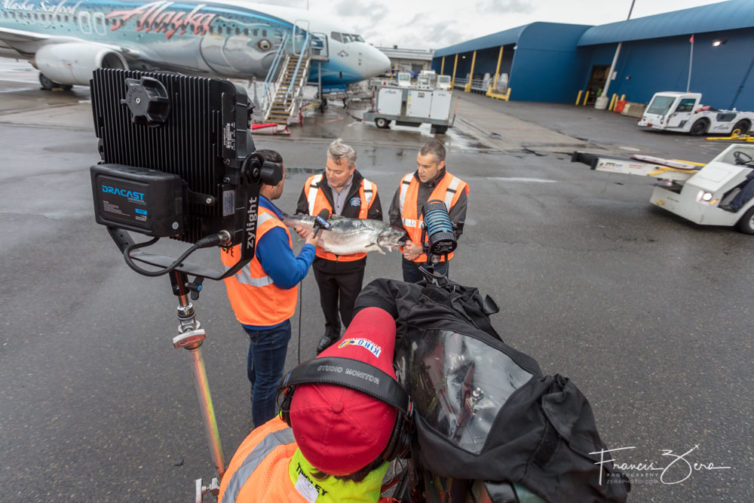 In the end Blaine, I think you are right to compare this event to Groundhog Day. Maybe you didn’t notice, but that movie has an 8.0 rating on IMDB, it is ranked #34 by the American Film Institute of the top 100 funniest American comedies, and the British Academy of Film and Television Arts gave it the award in 1994 for Best Original Screenplay. They just don’t give those awards out to anyone! Bill Murray, Andie MacDowell, and Phil the groundhog stole our hearts, just like this event seems to steal mine every year (okay, I might be going a bit too far here).

To tell you the truth, I think Blaine is just jealous. That is okay, who doesn’t get a little fish envy every once in a while? Do not worry, my friend, maybe we can try to work it for you to attend next year and you can see first-hand why this event means to much! Then afterwards, we can go out to a nice restaurant and have some Copper River salmon. My treat. Wait, how much does it cost per pound? Hmm, maybe we can split a plate. But it is totally worth it! 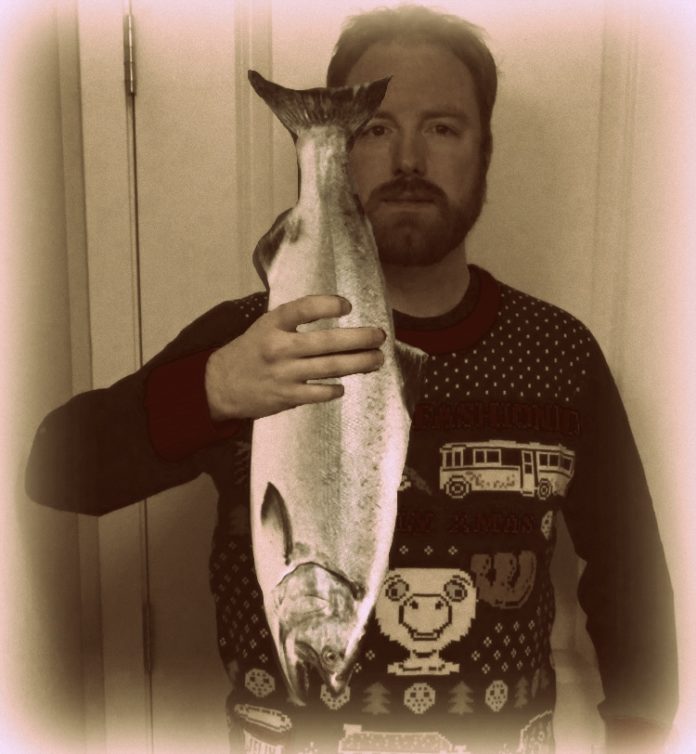 I found this photo of Blaine enjoying a Copper River Salmon a few years back. Just proves my jealousy theory.

Editor’s Note (a.k.a. Blaine):Â I’ve edited the same fishy story for years and years. Maybe it is because of jealousy from the delicious pink fish, or maybeÂ resent of yet another of David’s hard-to-edit stories, but I wasn’t up for it this year. Honestly, I’ve liked each of the prior years’ stories because of the chef cook-offs.Â Without that this year, I sort of snapped. Either Alaska flies a beautiful salmon here to me in Denver, or I’m going to pass on this legacy series! Also,Â I don’t have to tell you, but that last picture is fake, despite theÂ excellent sweater.Â

I dig it. Also jealous…

The fish is not the answer. No its being on the ramp next to the planes.

these just get better and better each year. Alaska must love it.