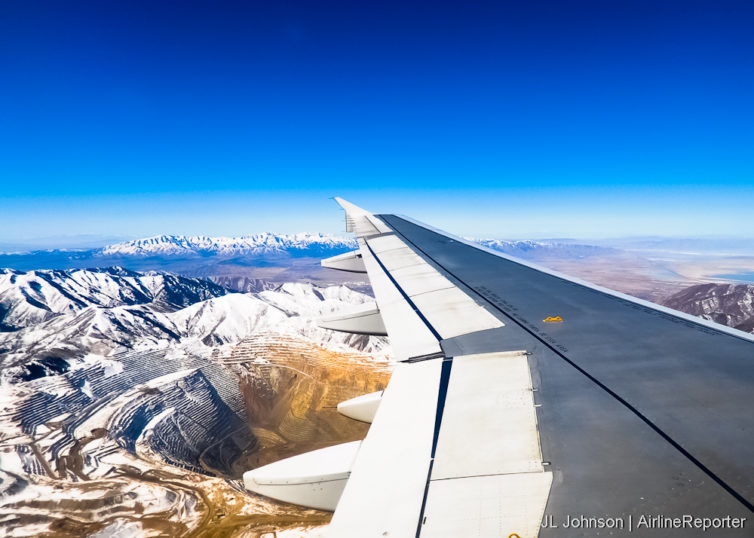 How many times have you looked out the airplane window and wondered what it was you were viewing? What’s that curious rock formation? Is that a volcano?! Why is the water in that lake differently colored than in surrounding bodies?Â These are the sorts of questions the perpetually-inquisitive flyer might briefly ask themselves. Sadly, these are often fleeting inquiries which never get the attention they are due.

Even the best in-flight entertainment systems provide limitedÂ detail, if any. And of course, it’s tough to research over often sketchy in-flight internet. Besides, where would we go to look up these geographic curiosities anyway? Fact is: It’s a chore to answer the simple “what’s that out my window” question. 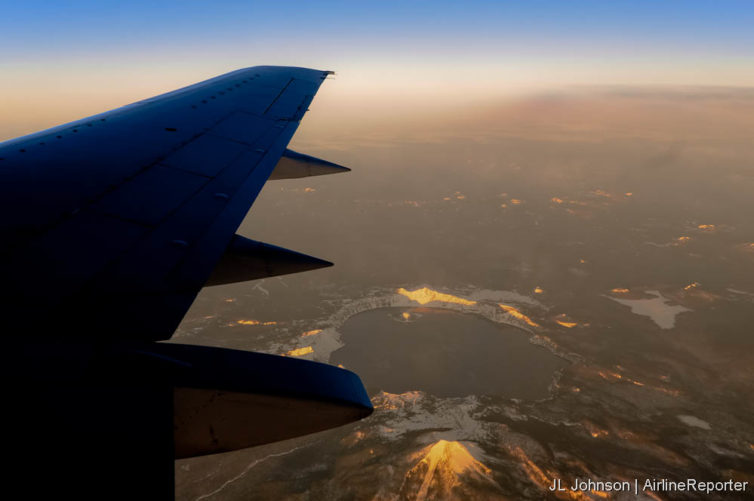 Flyover Country is a free app available for most devices and in most stores. “Free” typically comes with variousÂ caveats on app stores. Readers will be pleased to know Flyover Country it is not ad supported. It’s also not “freemium” (free at first with paid-upgrades.) Instead, the project receives funding in part via grants from the National Science Foundation. “[The] NSF saw the app as a way for them to get some of the wonderful publicly funded science […] back into the hands of the general public,” says Shane Loeffler, project lead, and University of MinnesotaÂ earth sciences academic.

I asked Shane about his reasons for creating the app:

Looking out the airplane window became a bit of an obsession of mine (it’s about the closest to going to space that I’ll ever get!) The view was always amazing, and as an Earth Scientist, I had a special lens that I could interpret the stories and history of the landforms I was seeing below. Most people glancing out the airplane window don’t have that lens to interpret the view though, so they might be missing out on a lot of the splendor of the things they were seeing. I was good with technology and quickly came to the conclusion that some sort of app would be the perfect way to provide a wayÂ forÂ people to take full advantage of the unique vantage point of the airplane window. 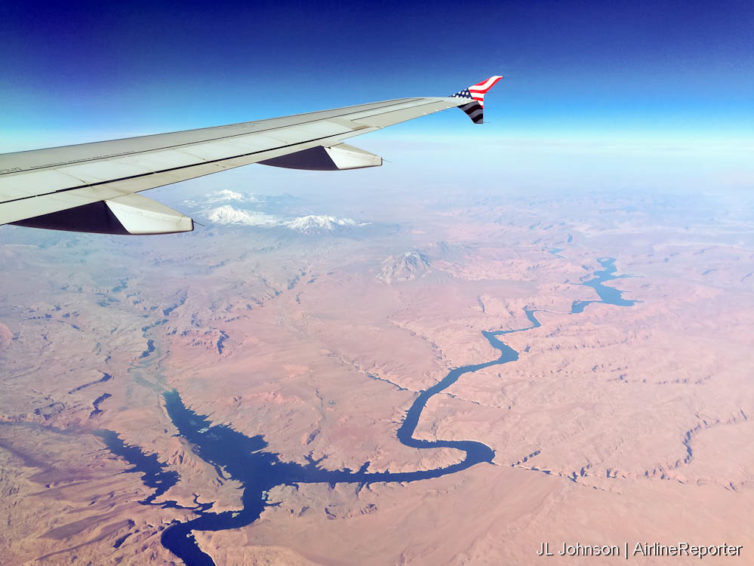 The Flyover Country app concept and design are impressive.Â No in-flight internet connection is required to experience all that the app has to offer â€” instead, the app downloads and caches rich data on points of interest along a user-defined path. The key is to save the data while an internet connection is available. I typically find myself downloading data while seated and waiting for boarding to complete. Despite the app caching a wealth of knowledge, the overall data commitment is shockingly reasonable. For a recent flight from Aruba to Ft. Lauderdale, my cache was just 24 megabytes. That’s roughly equivalent to a half-hour of “normal” quality music streaming â€” storage-wise that is equal to a handful of smartphone photos. 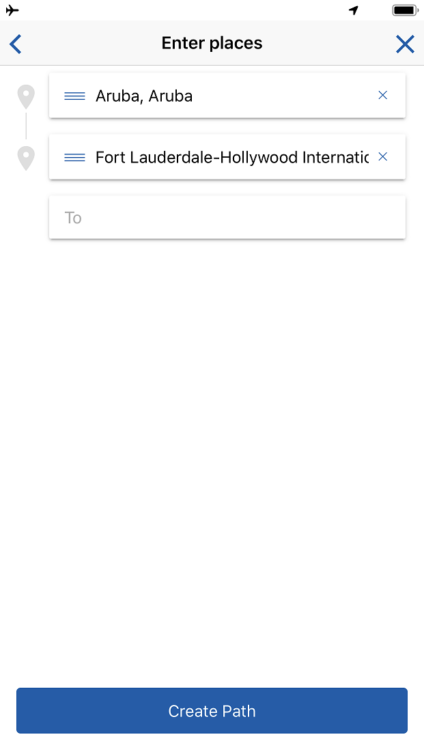 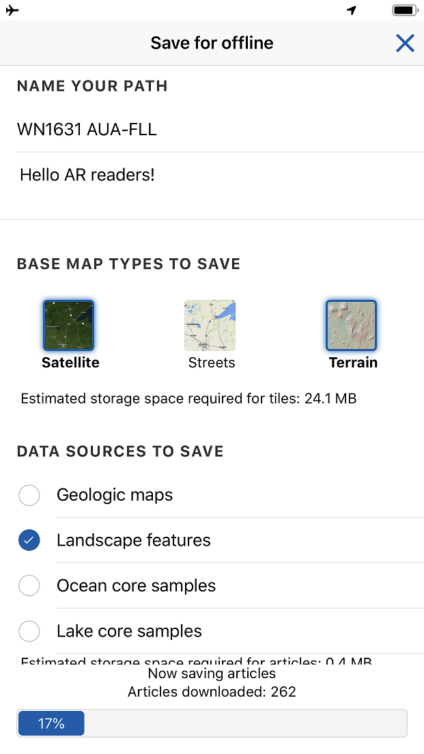 Once in-flight, the user loads a saved path. The app determines location via the device’s GPS and the user’s location appears just as it would on any map service.Â Users will find items of interestÂ highlighted in selectable orange circles. In explaining the app to friends and family, some were surprised to learn that GPS does not require an internet connection. Rest assured that GPS location determination works fine in airplane mode. 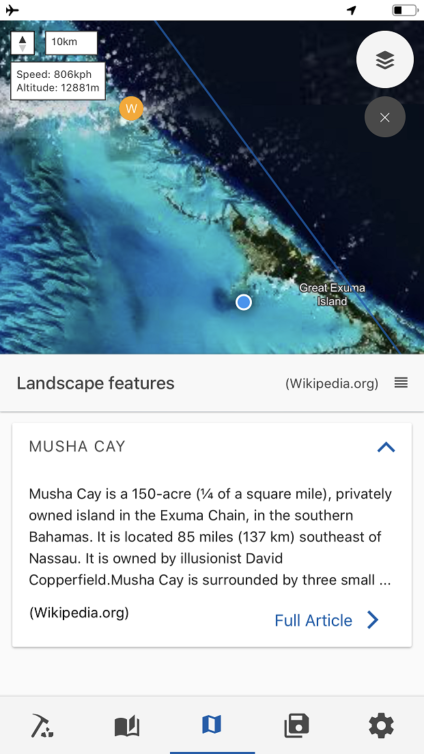 In the example above, we flew right over Musha Cay which I soon learned was David Copperfield’s private island. The app provides detailed snippets in-frame, but full-text articles are available. Out of curiosity I read further and discovered GoogleÂ co-founderÂ Sergey BrinÂ was married on Musha Cay in May 2007.Â Without the Flyover Country app’s insights, Musha Cay would have been just another unnamed island we flew over. 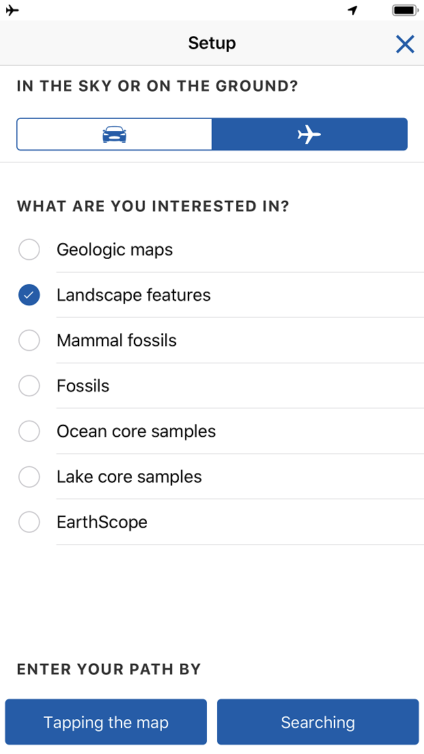 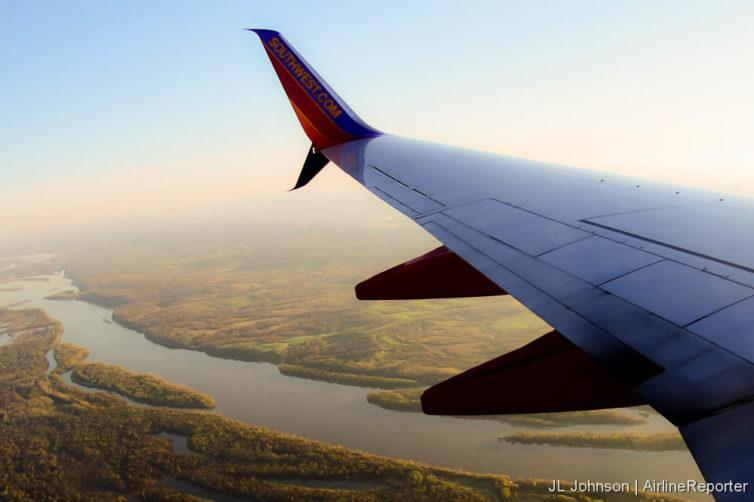 Flying over the Mississippi River near sunrise

Your in-flight experience will fundamentally change after downloading the Flyover Country app. I have long said that staring out the window is my favorite form of in-flight entertainment. Flyover Country takes the IFE experience to a whole new level. Each new route and associated path brings new excitement and lessons to be learned.

Have you tried the Flyover Country app? We are anxious to hear about your experiences and discoveries. The creators will be following along so please leave your anecdotes in the comments below.

https://www.airlinereporter.com
PlaneTags â€” A Bit of Aviation History in Your Pocket
Kaiser Permanente Redesigns a TSA Checkpoint To Minimize Your Stress and Maximize Your Health
12 Comments

Great article. I can’t wait to download and try this app. Thanks!

THANK YOU!!!! I was forever using google maps and an incredibly slow fly-fi connection to figure out things. This is AWESOME!

Wish you had sent this yesterday!!! I flew home, MCI to PDX as my last trip of the year and would have loved to try it.

Is this strictly North America or can it be used for other continents?

Andrew, thanks for reading. Good luck with the app.

Michael you are most welcome. Glad to see Iâ€™m not along in the excitement of having a tool to figure these curiosities out. Be well and thanks for reading.

David, this app is one for global use with the largest dataset being Wikipedia. You should be a-ok abroad. Look forward to hearing your thoughts.

I will be flying SFO to LHR to DOH to LHE in mid January, this app will be the best in-flight entertainment. Thanks

I had heard of this app before and was eager to try it out. I have it installed on my phone but, after trying some 2-3 times, I just gave up. Might give it another try. It was on the route GRU-YYZ (SÃ£o Paulo-Toronto).

Hey there, Oliver. I think one of the reasons I held off on posting a review for so long was to let the app mature. It has and I think your results will be different if your last experiment with it was some time ago.

Hi JL, yes, it was some time ago. But I did not delete it, will try again! Thanks for the comment! Merry Christmas!

Thanks for sharing!! Of all the travel apps I know, this one is a great app, just downloaded, fiddled with it. WIsh I had known 2 months ago when I flew (from Europe) to Atlanta, Tampa. But next time I’ll use it cause I’m ADHD (they say), so I really need to keep myself amused onboard ;-}