Spotting from the hotel at ATL.

Being an AvGeek since I could walk, and currently a private pilot, I have always wondered if I could fly a real airliner.  I always felt confident that I could, but that little part of me wondered if there truly was anything special I lacked; could I safely land one if I had to? I’m sure many of you have thought about needing to take the controls of an airliner to save the day and I wanted to put my skills to the test. Of course, not in a way that would actually put people in harm’s way.

I recently decided to make the journey from Boston (BOS) to Atlanta (ATL), where I thought I could test out my skills. The quick flight of two-and-a-half hours (depending on winds and approach) from BOS into ATL passed very quickly. My son and I arrived in Atlanta just as dusk approached. Our first stop was checking into the Renaissance Hotel. We booked the “Aviator’s Package” — yes, an AvGeek’s dream hotel. They handed us a cool bag with a bunch of airplane goodies as well as passes to the Delta Flight Museum. They then directed us to our room on the 10th floor corner, which overlooked the approach end of 26R and the Delta maintenance parking area.

Eating dinner, courtesy of room service, out on the balcony listening to the hum of jet engines, jumping up to snap pictures of the next beautiful airplane either landing or departing, and just overall enjoying the ATL evening activity, dusk turned into night and the bustle continued. The tower was lit in a really cool blue/green color and the sea of airplane navigation lights was like staring into the night sky looking at stars. 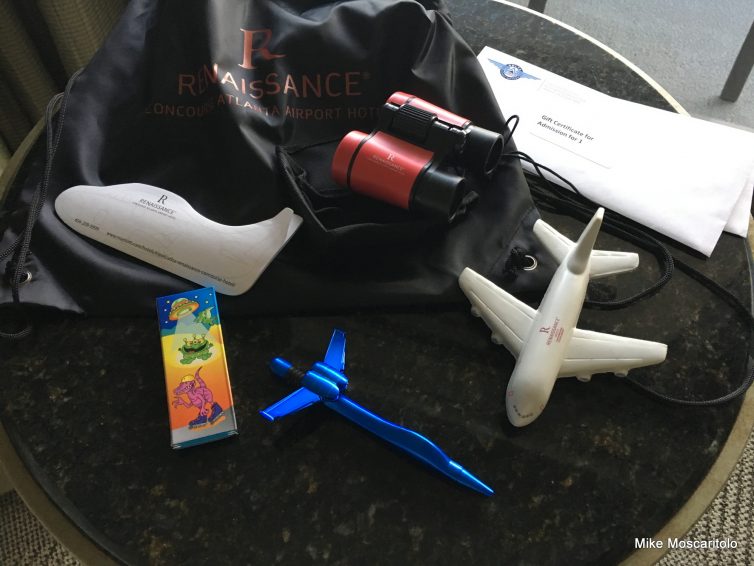 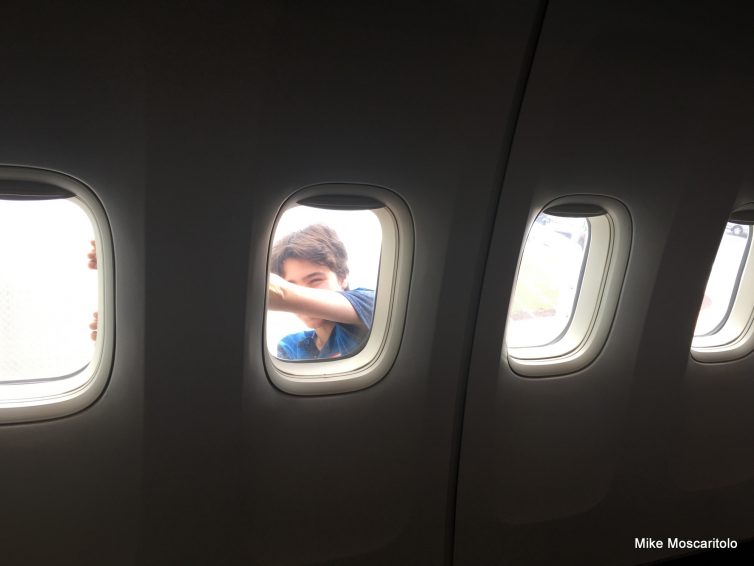 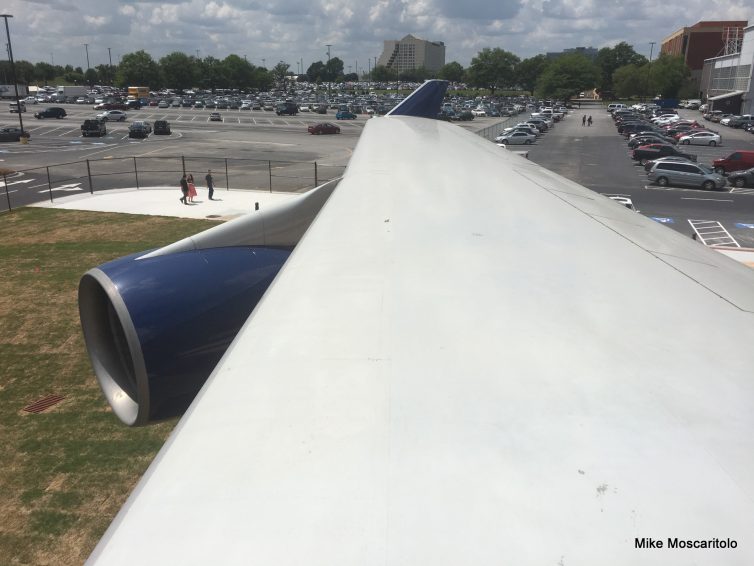 After a few hours of evening spotting, we turned in. We woke up the next morning to, yes, room service and breakfast on the balcony as ATL began to wake up. The morning fog lifted and the runway became clear. The sounds of airplanes taking off now transformed into a line five-deep waiting for their ’œline up and wait’ from the tower. This time we got lucky as they were departing on 8L, which meant we were able to see rotation in front of us.

This was worth the trip in and of itself, but it was about to get much better. After breakfast we got in the car and took the five minute drive to the Delta Flight Museum, which we could see from our hotel room. I won’t get much into the museum as AirlineReporter published an article very recently on that topic.

I will say this; since that article was published, the 747 display has opened and is well worth another visit even if you have seen the museum already. Getting up close and personal with the Queen of the Skies is amazing. Sitting in the premium cabin seats (yes, I’m one of the coach guys) was a real treat. Of course, my son now wants to fly to Europe in a lie-flat seat. The wing walk is a treat. Going out on a platform standing on top of the wing, you can appreciate the massiveness of it. 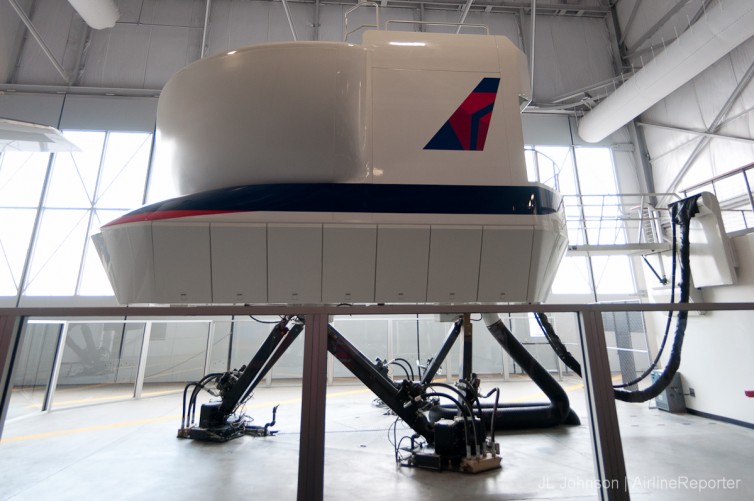 Okay, the reason for the trip: the 737. Located in the museum is a full-motion Boeing 737-200 simulator. Booking time in advance, my son and I met our instructor for the one-hour ’œflight.’ He was a retired Delta Air Lines captain, and had extensive knowledge of the 737, which made for a really fun experience. No aviation experience is necessary; they will give you a brief overview of the cockpit and guide you along the way, tailoring your experience to your ability.

The full motion is unbelievable. If you let your mind believe it, you will be in an actual 737. ’œThrottle to 20 percent, watch these two instruments,’ he pointed a laser pointer over the N1/N2 gauges, ’œand if stable, hit the auto throttle button on the side and follow the throttles to takeoff thrust.’ My son was flying the ’œfirst leg.’

’œAuto throttle set,’ Matt (my son) said to me. ’œAirspeed alive,’ I reply, as we are pushed back into our seats by the full motion simulating full power as we begin our takeoff roll. We decided to depart out of Los Angeles (my son is a Grand Theft Auto fan and knows LAX from that). ’œEighty knots,’ to which our instructor replied, probably institutionally, ’œcross-checked.’ At 110 knots I began calling out… ’œ110, 120, 130, 140 and v1, and Rotate.’ Our instructor told my son to pull back gently on the yoke until getting 10 degrees up (again the laser on the attitude indicator). And off we go!

’œPositive rate, gear up.’ I reached out and lifted the gear and we were airborne! Feeling the airplane’s weight as the wind gave us a little chop on departure. Even the thud of the gear coming up was realistic. 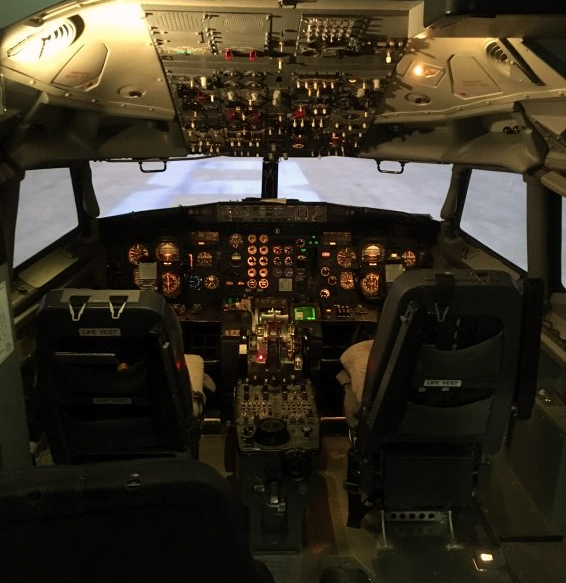 Expertly guiding my son, who, mind you, has never flown an airplane in his life, our instructor directed him to ease the airplane into a nice left bank, level off and fly the perfect pattern. We came around base to final, looking right down the numbers of 6R. He showed my son where to watch for the ILS and glide slope on the instrumentation. He gave me instructions on speed. I was in charge of the autopilot which was only handling the throttles. My son was flying the airplane by hand the entire time. ’œSet flaps 15 and gear down, glide slope is alive, reduce speed to 145 and flaps 20, now 30.’

The plane was buffeting ever so slightly as my son flew it down. ’œFive Hundred,’ came the magic Boeing voice. Keeping it lined up perfectly, hands on the throttle he was told to disconnect auto throttle and over the numbers just ease it back. ’œOne hundred, fifty, forty, thirty, twenty, ten, bump!’ Main gear is on, speed brakes snap up, ’œnow pull back the reverse thrusters about half way.’ We move forward against the seat belts as the airplane slows quickly. ’œPassing 60 knots throttles idle, toe brakes to stop,’ and there you have it. A perfect landing by my fifteen-year-old son. Yes, it is true, you can easily land a 737! 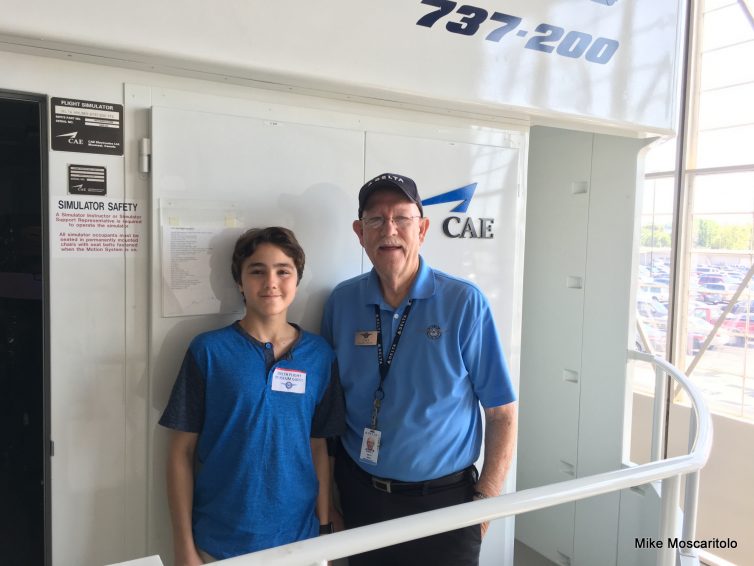 We are both successful pilots!

Fly with confidence now, my son. If you’re ever called into the cockpit because the crew ate the fish, no worries, you can land the plane. And just so you know, we are all counting on you.

We spent the remainder of the hour taking off and landing at various airports, simulating ILS, weather, rain, turbulence. It was so much fun we will go back. The photo op at the end with our actual certificates of achievement that we flew the 737-200 just put the icing on the cake.

The Delta Flight Museum in Atlanta, don’t just visit it’¦ experience it all! (highly recommend to book ahead online)

This story was written by Michael Moscaritolo for AirlineReporter. Mike currently lives in Boston and is a licensed pilot who flies the C-152, 172 and Piper Warrior.

CONTRIBUTOR - BOSTON, MA. I am an avid spotter, #Avgeek and overall enthusiast. I hold my private pilot's license for VFR single engine and I can proudly say I have over ten hours in an actual 737 simulator. I am the author of Flightline - an aviation thriller. I currently reside in Boston and travel the world for aviation related opportunities and photography.

Living the Dream: Flying Seat 1A on a 747
Making the Regional Jet Cool Again. Flying the Embraer E-Jet.
13 Comments

Your son got the landing flare on the first try? Ugh, I’ve done the simulator 11 times now with a few of those times just working on landing and I can’t master the landing flare!!!! I’m either too low and we land hard or I’m too high and we start ascending again. Well done!

LOL Yeah, he amazed me! He’s thinking about becoming a pilot so I thought was a good idea to have him get the feel of a jet. He certainly has the touch!

I always have a great time. I’ve been in the cockpit with the guy you had before, he’s great. I’ll say that I have crashed on landing a few times. It was the times I flared too much and ended up ascending some then over corrected and slammed down. I am getting better though. I think I’ve had a really smooth landing maybe 3 times. Usually it’s a bit harsh as I don’t flare enough. I just can’t get to that sweet spot that he says is “natural”. Grrr.

I did pretty good. I had some bumps and crosswind so it was a little more challenging for me but I do get it down and you can walk away. So that’s a good landing. Lol

As one of the other Delta Flight Museum sim operators, I would say over control is one of the things folks have a trouble with, it only takes a slight movement on the controls. Also, the typical high wing Cessna type pilots tend to flare too much at touchdown. If you want to fly, we recommend that you book it online (up to 30 days in advance) don’t want people to be disappointed.

Thanks for stopping by :). Great point about booking ahead. I just added it to the end of the story!

Paul … Not sure if you remember me — I came with two friends about a year or so ago. We had a blast – you were awesome to fly with! (I did request you but apparently you were not working when I came with my son). We had a great flight though… All the DL guys are awesome.

Great article and experience! Thanks for sharing!

Glad you enjoyed it!

While not the real thing, there’s a 737-200 payware product available for X-Plane. The developer has done a wonderful job with it. As a bonus, many people have created all sorts of classic liveries for it as well.

I do have the 737-800 on FSX which is very realistic. Nothing, however, beats the full motion experience! 🙂

What Can You Are Doing To Get Free From KIDNEY DIALYSIS?
Observe This Video http://kidneyok.tumblr.com/