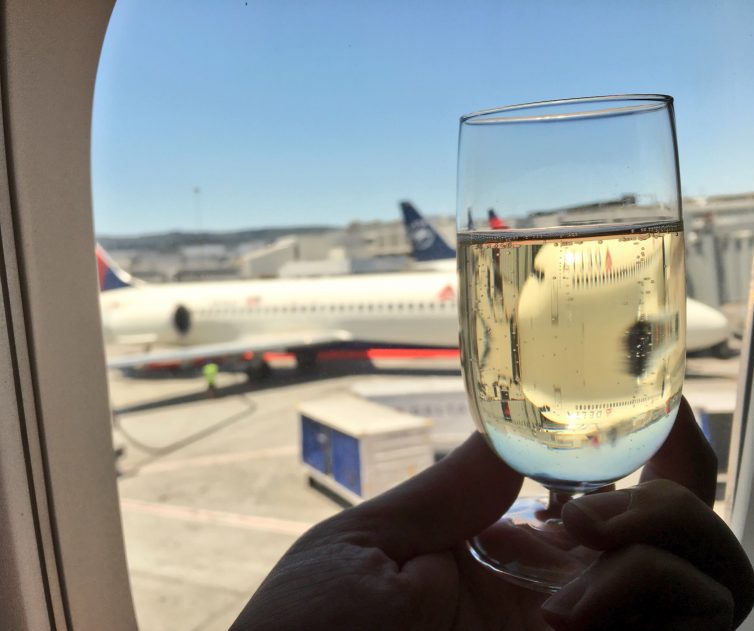 Delta Air Lines likes to call itself the ’œthe on-time machine.’ Heck, they even filed for trademark protection of that term. Indeed, the airline does have a statistically high on-time performance and completion factor. But what happens when your flight is one of the minority that does get delayed? And what if I actually wanted it to be delayed? Weird, right?

Delta excels at providing rebooking options to passengers, but only if they are tech savvy enough to take advantage of the tools provided. Before the system could automatically rebook me, I jumped into action and quickly protected myself on a similarly timed connection via Las Vegas, one of the few options out of San Jose on Delta. I was still in First Class, but I didn’t really like that option. It put me into New York even later than my original flight, and I didn’t like the aircraft operating the flights (old 737-800).

Thankfully, Delta lets passengers change their original airports to nearby options when rebooking. On a whim, I changed my origin city to San Francisco to see if anything was open from there. Because Saturday flights are usually some of the emptiest in the sky, I was in luck. The app said I could switch to a 767-300ER out of SFO non-stop to JFK, but I might be in a different cabin and there are no refunds for voluntary downgrades. The app did not identify which cabin I would be in, but I guessed this meant Delta One. I was right.

Of course, I still had to get from San Jose to San Francisco, which natives will tell you can take up to 2 hours on a weekday. I had just 1.5 hours before my new flight departed. Amazingly, the notorious Bay area traffic was non-existent, and an Uber whisked me up to SFO in just 30 minutes for a measly $31.

Unfortunately, the Delta app got a little confused and refused to let me select a seat or even obtain a boarding pass — possibly because I made a change so close to my new departure time. Because JFK was hit by severe weather the previous night, the phone hold time for customer service was over two hours. Compounding that, the @Delta Twitter account refused to respond to any of my questions. A week later, Delta confirmed that my original flight was delayed due to a mechanical issue with the inbound aircraft. My flight the prior week had been delayed due to crew rest issues, which should never be a problem at a major hub for a morning flight.

Once at SFO, it was smooth sailing. A kiosk printed out a gate pass, a gate agent assigned me a seat, and I was enjoying myself at the beautiful new SkyClub in no time. This was to be my first ever experience flying in Delta One, so expectations were high. For the most part, they were met.

Visually, the cabin of the 24-year-old Boeing 767-300ER was clean and bright. Each Delta One seat had a waiting blanket, pillow, amenity kit, noise-cancelling headphones, and a bottle of water. More than enough for a quick five-hour transcon flight. Before pushing back, the incredible purser came by to personally introduce herself and drop off a pre-departure drink and meal menu. 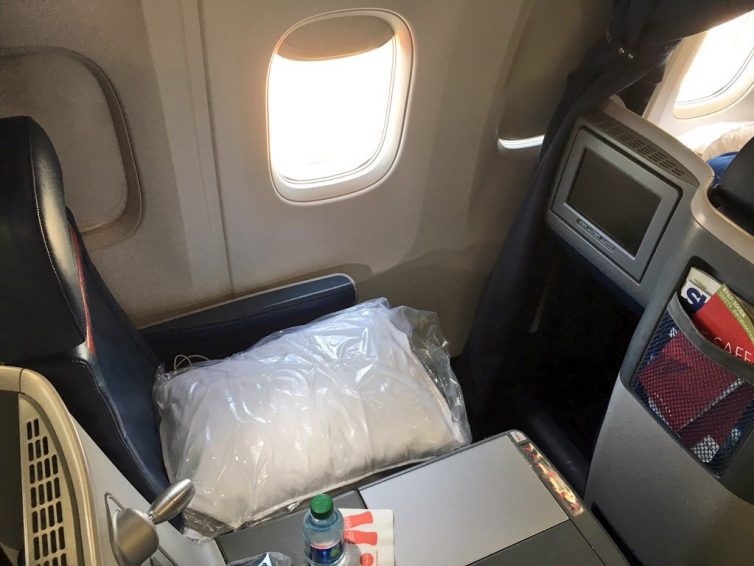 The Delta One 767-300ER seat. More than adequate for a domestic flight, but a tad dated by modern standards. – Photo: Jason Rabinowitz

The seat on Delta’s 767 fleet isn’t my favorite, but it was more than sufficient for a short transcon. The 1-2-1 staggered Thompson Vantage seat is fully lie-flat, but the footwell is just too small and constricting. Not a problem for a daytime flight, but I much prefer the reverse herringbone seats on Delta’s Airbus A330. The in-flight entertainment screen is also quite diminutive, especially by modern standards which can reach sizes of up to 32″ these days. Delta also still hasn’t quite grasped the concept of ’œgate-to-gate’ entertainment, as the system did not activate until after takeoff and deactivated the moment wheels touched the runway. That’s a lot of lost screen time during the boarding and taxi process, especially at JFK where the time from gate to runway could be measured in hours, not minutes. 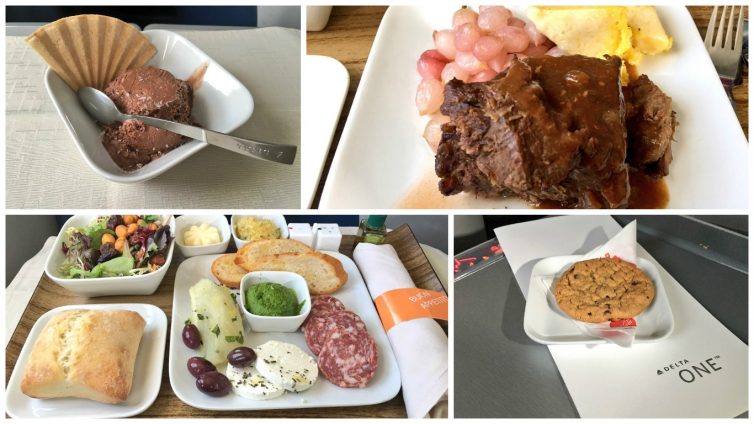 Because I was rushing around the greater San Francisco Bay Area to catch a flight, I had yet to eat that morning. I was looking forward to my in-flight meal, and my goodness, the meal service in Delta One shattered my expectations. I’m still undecided if it was better than the meals served by JetBlue in its Mint cabin; it might be a dead heat. The presentation of the antipasto appetizer alone was incredible and could have passed for a full meal on any domestic flight.

I selected the short ribs in red wine, served with cheesy polenta triangles and pearl onions.  While not the most visually appealing dish, the serving size was generous and the meat tender. Most people would pair the short ribs with a wine, but I washed it all down with a Brooklyn Brewery American Ale. Unfortunately, none of the beers on the printed menu were actually available, as I find is typical for Delta flights. For dessert, I indulged in the dark chocolate gelato.

This 767, like all other Delta aircraft larger than a 50-seat regional jet, was equipped with Gogo in-flight connectivity. Unlike the bulk of Delta aircraft operating with the slow as molasses air-to-ground system, this internationally-configured aircraft uses a satellite-based system. The Wi-Fi was sufficiently snappy enough to tweet pictures of my journey from coast-to-coast, but not quite fast enough to stream the European Cup soccer match. I didn’t expect it to, nor is it technically allowed, but I gave it a try. Oddly enough, Netflix did kind of work, which was a nice surprise.

After another movie or two, we arrived at JFK a bit early and parked at terminal 2. I managed to beat my original flights to New York by over three hours, and slide my way into Delta One along the way. My last three trips on Delta have seen delays long enough to warrant changing flights and even airports, but each time the solution turned out to be as good or better than the original flight. Self-service recovery from delays has become incredibly important, and Delta seems to have it nailed down properly.

Yeah, exactly. I still remember the aircraft – a DC-10 – that was used in the commercial spots. Why would Delta try to trademark the phrase? Whatever…

Great post! Sometimes delays can turn into something good.

Yeah, Delta does a good job at this. Loved it when my SNA-SLC flight was delayed, and was able to grab a LGB-SLC flight and get my PM upgrade!

(oh yeah, and made my connection)