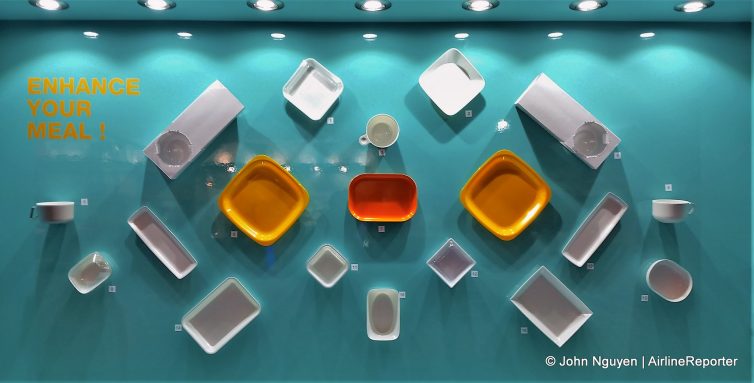 In conjunction with the Airline Interiors Expo last month, the World Catering & Onboard Services Expo (WTCE) was also co-located in Hamburg, Germany’¦ talk about a week of #PaxEx (passenger experience)! WTCE brought together vendors who showcased the best of their food and drink, wares, and concepts, all in the name of passenger comfort and meeting customers’ demands (of course, by that we mean the airlines as customers). Everything from futuristic catering systems, to plastic spoons and condiments, we take a look at some highlights and personal favorites. 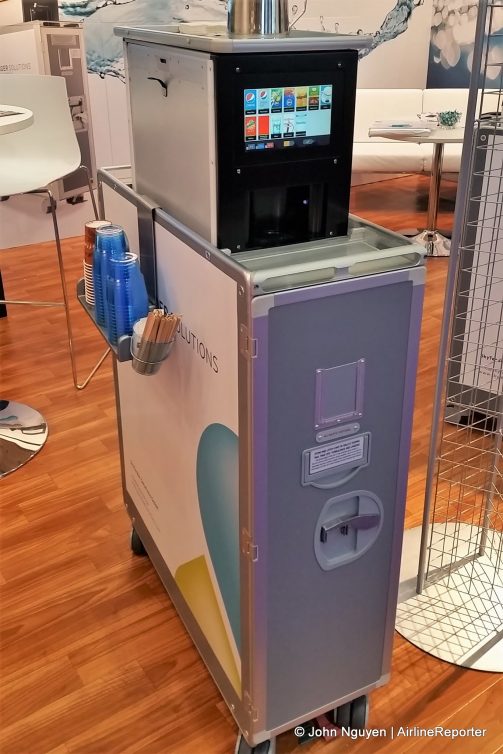 The SkyTender setup itself weighs just under 45kg (100lbs), and a fully-loaded SkyTender cart tops out at 98kg (215lbs), while a full traditional beverage cart can be 115kg (250lbs) or more. Beyond its own weight savings, the system is designed to reduce over-catering, which improves operating efficiency by reducing product waste and decreasing fuel burn due to additional weight. An onboard computer not only manages its primary function of dispensing tasty drinks, but also collect data on how the drinks are dispensed, giving the airline insight as to which beverages are popular’¦ and which are not.

Further goals include reducing workload on the crew and improving safety (hygiene-, ergonomics-, and cabin-projectile-wise).  The system is available to airlines and caterers on a rental basis as well as an outright purchase, allowing for operational flexibility and not requiring an hefty initial investment to test or start. Ting Lin, a spokesperson for SkyTender Solutions, stated that their system is currently in limited proving trials with undisclosed customers, and anticipates picking up their first orders before year’s end

I shared photos and my description of the system to some of the cabin crew on my flight back to the States, and they had positive reactions to it and thought it would be a great improvement if it worked as advertised. Did I also mention it looks cool? 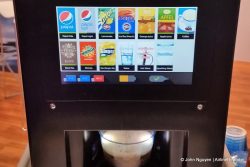 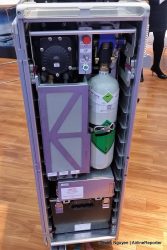 The insides of a SkyTender unit 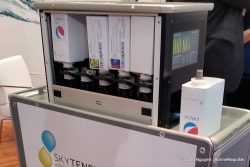 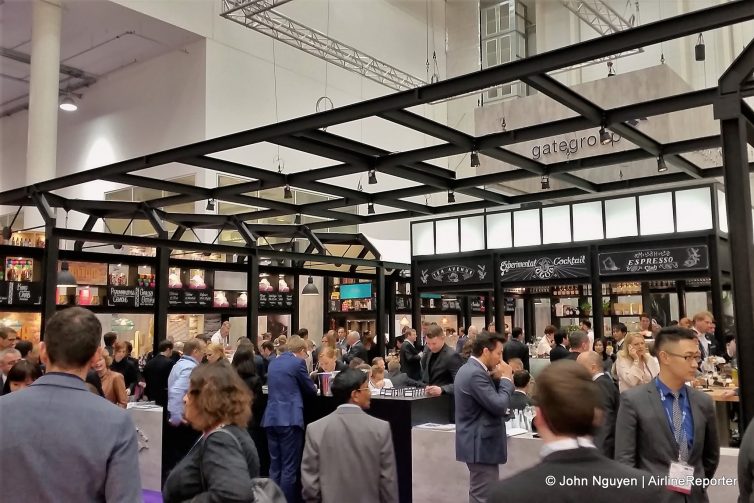 Full-service caterers were out in full force, and brought out bells and whistles to attract potential customers. While many had the typical enclosed set-up, Gategroup went all-out with a food hall designed to showcase their offerings. Regular dining tables were mixed in with community counters and benches, and visitors with hand-crafted drinks were mingling and enjoying sample meals and snacks. 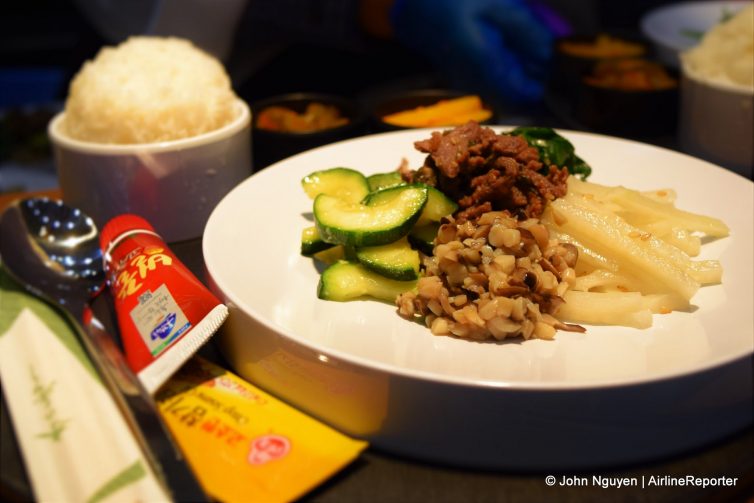 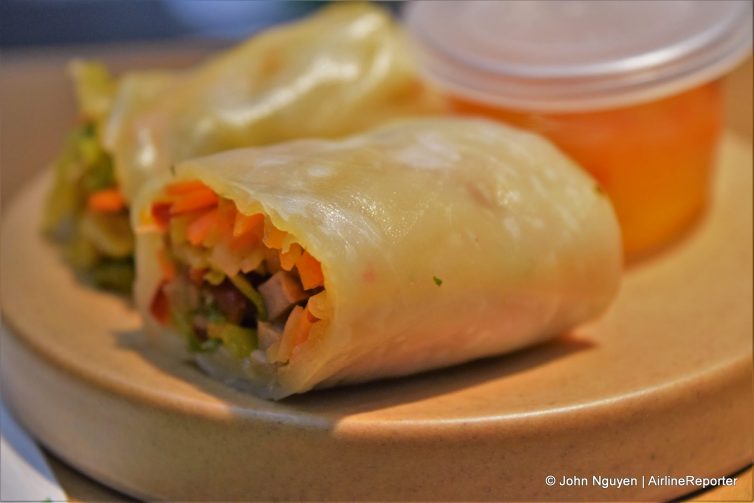 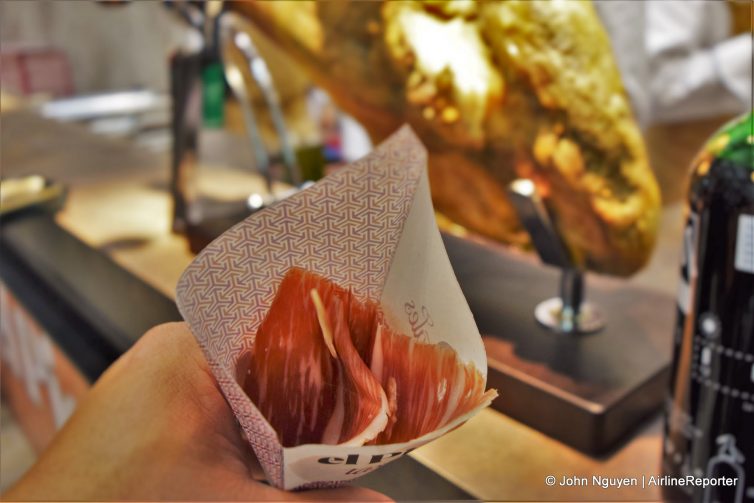 The winner here was a delicious bibimbap, a deconstructed Korean meal involving several ingredients that are mixed all together with white rice, red pepper paste, and sesame oil. Bibimbap is not only a hearty, filling (yet healthy) meal that is a staple of Korean homecooking, it’s also very airline-catering friendly and survives storage and reheating at high altitude very well (those who have flown one of the Korean airlines and had bibimbap, even in economy, would probably agree). Other items in the food hall included Vietnamese spring rolls, Cuban sandwiches, American pulled pork, and Spanish serrano ham. 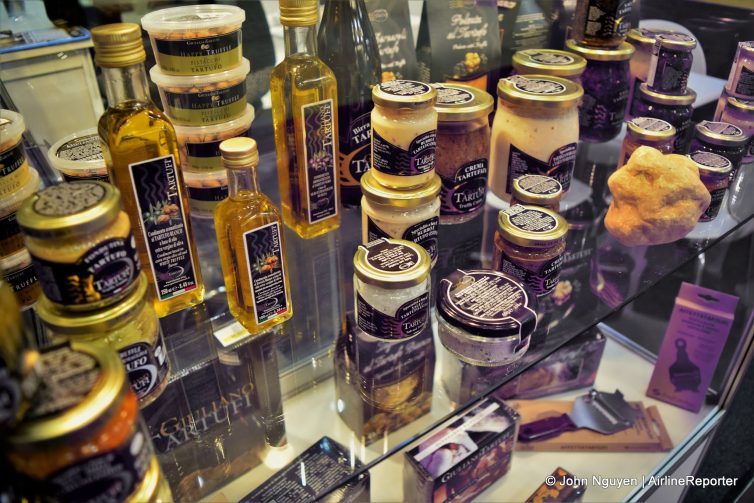 What can I say, I’m a sucker for anything truffle, and fighting the good fight at WTCE was Tartufi and their expansive line of products flavored with truffles and truffle essence (we’ll save the debate of essence for another time). This is an area where catering could spend a little and get a lot back in flavor enhancement. Everything from salad dressings, butter, and even sea salt with a hint of truffle, to the sharpness of truffle cream added to a main entree, truffles really can only improve most onboard offerings. Admittedly, this type of product would probably only reach the premium classes, but if a carrier was looking to invest more in their soft product (I’m looking at you, Cathay Pacific), this would be my vote. 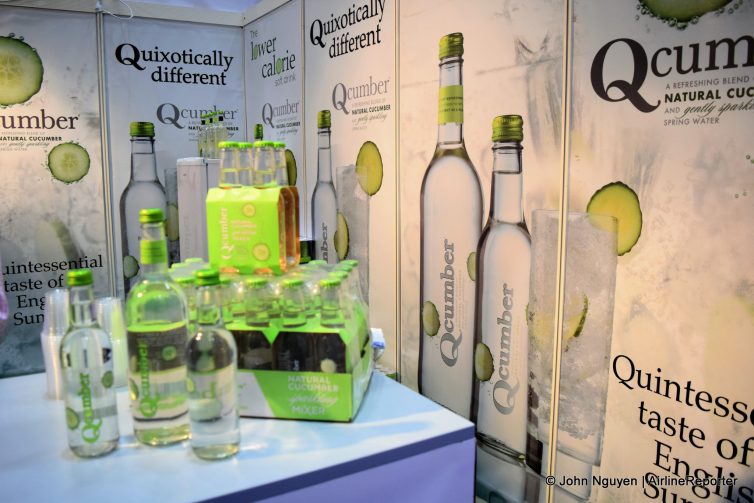 Plain-and-simple: it’s cucumber-flavored soda. That may sound dubious to some, but Qcumber was actually quite refreshing. It was more of a cucumber essence with sweeter-than-typical sparking water, and honestly delicious. The reps said it reminded them ’œof a warm English summer’ and I’d have to agree with them. Based in London, Qcumber distribution has reached Canada but not in the States yet, due in part to ’œQcumber’ already being trademarked in the US. 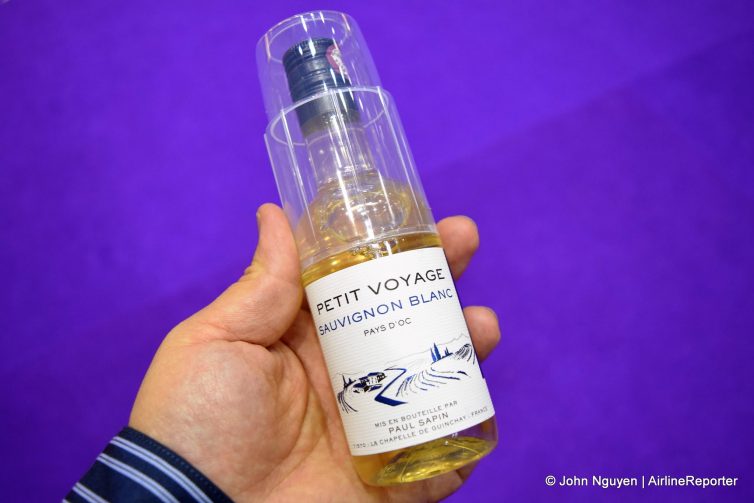 A product for the masses! Let’s face it, there’s really no way to look or feel glamorous drinking wine while sitting in economy. Paul Sapin’s “Petit Voyage” packaging cuts out the fluff and makes drinking wine practical, for both passenger and airline, by mating a drinking cup right over the top of a single-serving plastic bottle. For the passenger, it’s a matter of convenience, having a handy cup ready to go in a single, integrated, compact wine-imbibing system, which also makes for easy disposal. For the airlines, weight savings, reduced crew workload, and better use of limited space (not to mention passenger happiness) win the day. 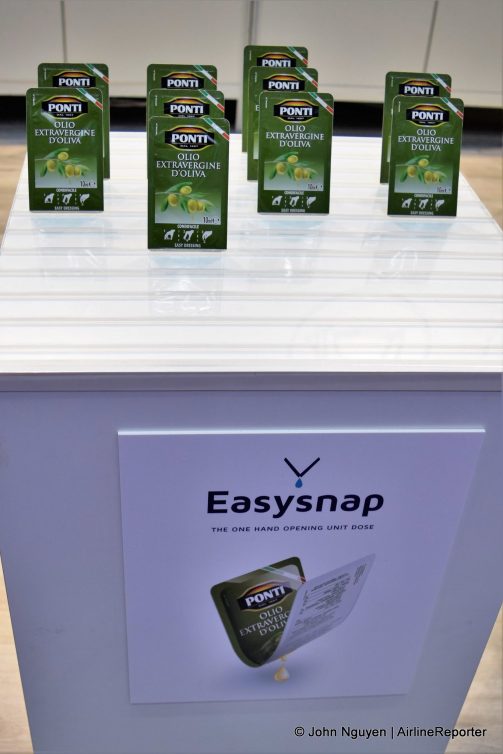 Another design winner, Easysnap makes dispensing condiments a snap (pun intended). Instead of fumbling with packets or tiny bottles that sometimes topple over, passengers just fold an Easysnap semi-hard flat plastic package until it snaps in half and releases tasty goodness onto your target. No mess, no fuss, and easy control for the passenger, and the airline saves space, weight, etc. Definitely one of the most mundane things to think about (and really, a #FirstWorldProblem at its best), but the little details add up. Bonus points for one-handed operation, especially nice in tight quarters like seat 55E.

Catering Wishlist: Healthier as the Theme 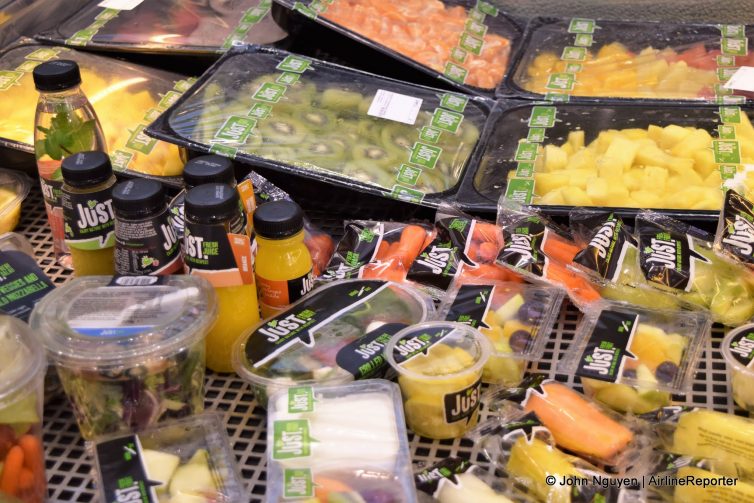 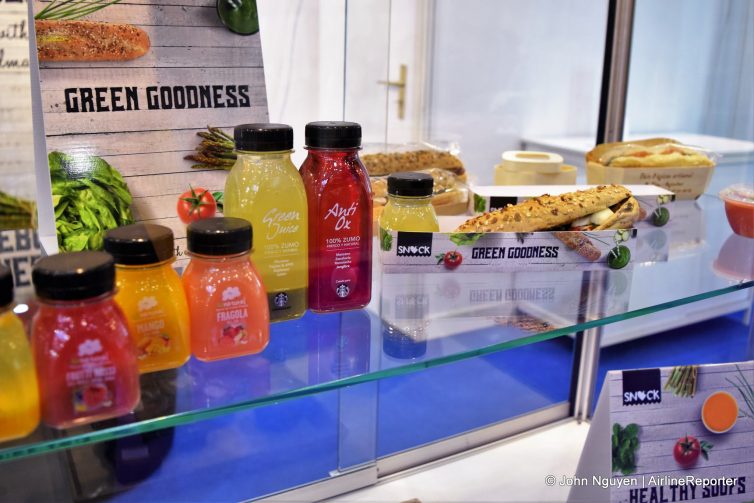 Finally, a non-specific observation worth mentioning was that there seemed to be a concerted effort this year to offer fresher, healthier catering options, whether it was for full meals or simple snacks. I would have jumped for joy at getting a little satchel of fresh pineapple, a small whole-wheat turkey wrap, or a sliced-egg-and-spinach sandwich on multi-grain bread instead of the double-whammy, sugar- and salt-bomb I recently had on a short-haul European flight: 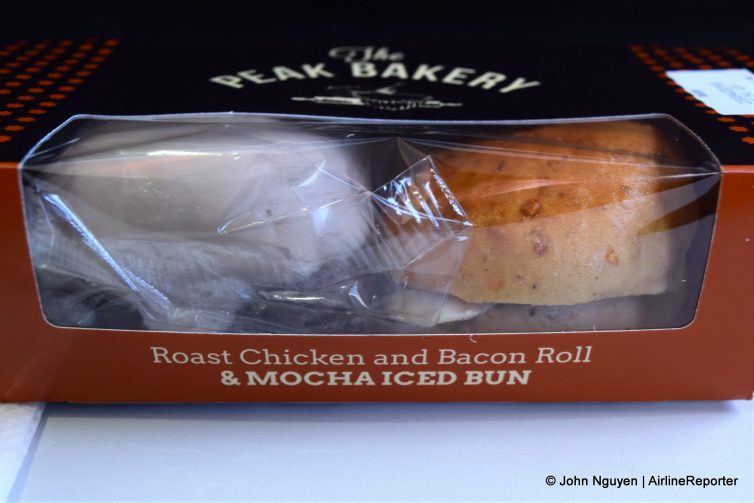 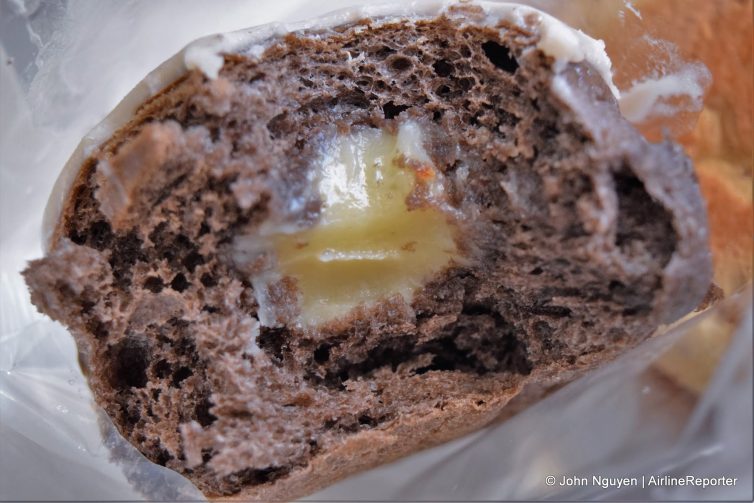 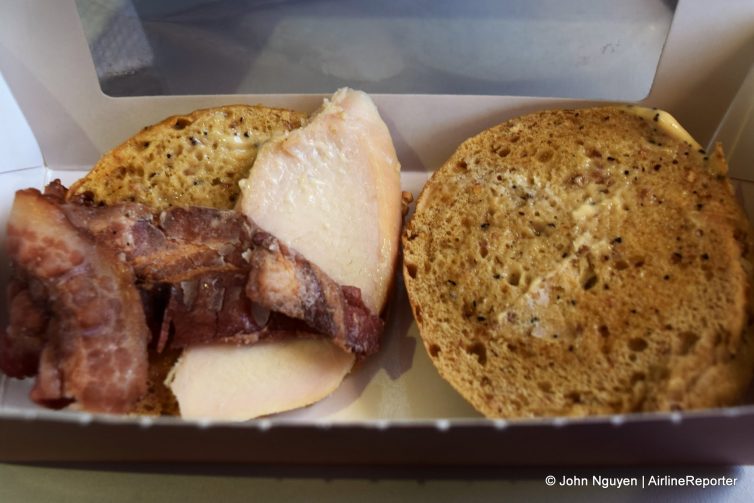 When it comes down to it, the quality of in-flight catering is all about how much the customer (airline) is willing to spend. I personally think the SkyTender is a winner, if it can prove to be reliable. The rest’¦ well, hopefully airlines will see the value in passenger satisfaction.

Corrections: The weights of SkyTender and traditional carts were erroneously listed and have been corrected. Also, Qcumber is currently available in Canada.

I agree the Skytender is a real smart idea. Basically a soda fountain on a cart.

Now if someone could make beer taps on a cart…..

The SkyTender really looks cool. It kind of reminds me of a product called the BreakMate that Coca Cola tried to produce in the 1980’s. The BreakMate was a tabletop office soda fountain that contained syrup bottles and a CO2 tank, and a water reservoir in case a water line wasn’t available. I think the BreakMate could hold syrup bottles for three different flavors. We tried to get one but I think Coca Cola had a lot of trouble trying to get the thing to work right. This new gadget looks like the fairly new soda mixing machines you see in a lot of movie theaters. Really cool. Heck, EVERYTHING in this article looks cool! Thanks for the report!

Hmmm…Phoenix would like to see a beer tap on a cart. We live in micro-brew country here in Denver, so we sure would like to see something like that! I wonder if there is a way to manufacture a light, reusable, composite keg suitable for an airborne beer cart. We will need some lightweight recyclable pilsner glasses to serve the beer. After we get FAA approval for the rig we should find a way to get some of the flight attendants to dress in lederhosen or St. Pauli girl outfits during Oktoberfest to really kick this product off! Are Phoenix and I alone in this? Wouldn’t this be great? We’re going to need some BIG pretzels, too. Well, bigger than the mini-pretzels that are currently being offered.

Microbrew country here too in Vancouver. Except bearded hipsters in flannel. Mostly.

(ok not really, most of the beer people I talk to are extremely approachable regular Joes/Janes)

I still like your idea though! Sausages would be swell to add.

It sounds like all we need now is a sausage-dispensing cart, and we’re in business.

Thanks for the comments!