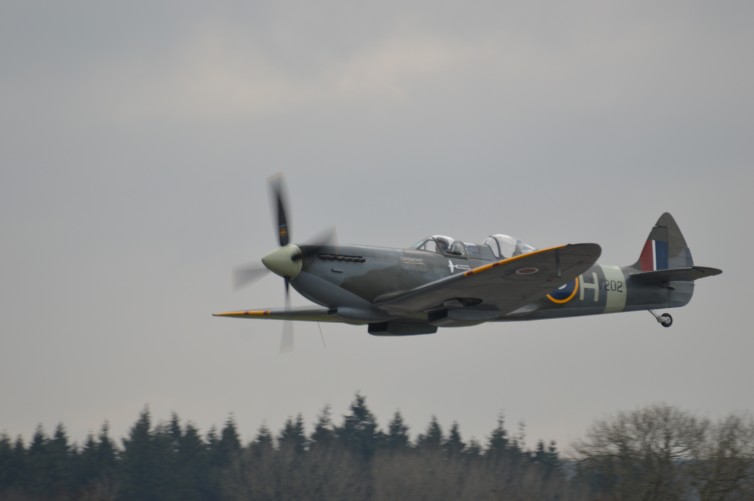 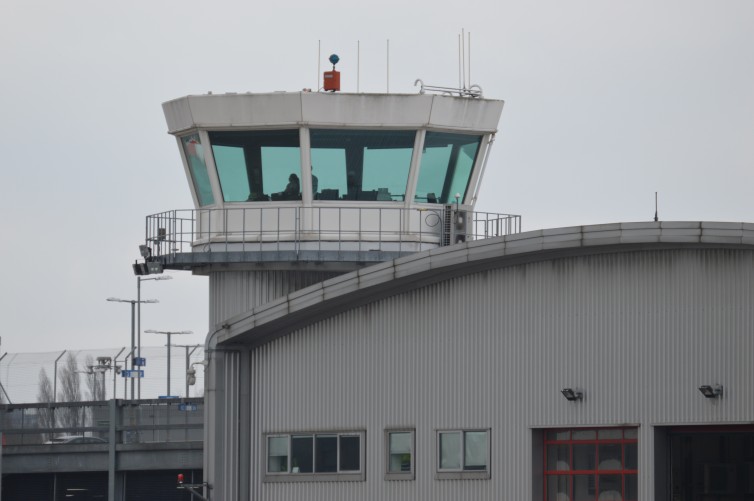 It was 80 years ago, to the day, that prototype R5054 was wheeled onto the apron at Eastleigh airfield (since renamed Southampton Airport). The airport’s sacred history, however, dates back further to Edwin Rowland Moon’s 1910 flight of Moonbeam II  ’“ an aircraft he had designed, built, and tested at a nearby farm.

BONUS: 75th Anniversary of the Battle of Britain 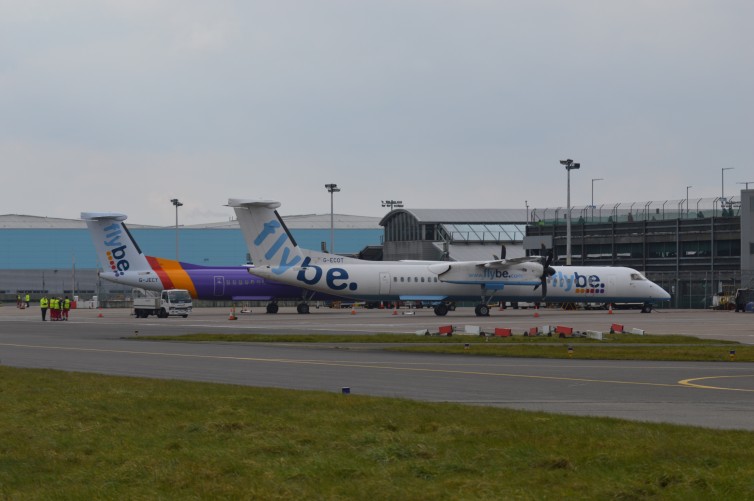 The airport formed part of the Royal Navy during the Second World War, survived an economic slump during the 1970s, and is now thriving with 1.9 million annual passengers as a base to UK regional airline, Flybe.

SOU’s Head of Airport Operations, Neil Garwood, is proud of being part of the airport’s continued success and was looking forward taking part in the festivities. Both he and RAF Volunteer Reserve Training Officer Cadet, Mike Glen, used the word ’˜inspiring’ to describe the atmosphere. I agreed, inspiring and, well’¦ freezing!

Despite the weather, that day was all about SOU’s spiritual connection to the Spitfire. Roughly thirty journalists and photographers huddled in the airside rest area of the hangar and listened to a series of briefings and advisories about the morning’s plans.

This was not just a big deal for AvGeeks and historians — the event was also scheduled to be broadcast on national television, and the British Forces Broadcasting Service transmitted a live feed to various British forces stationed throughout the world. It was riveting stuff. 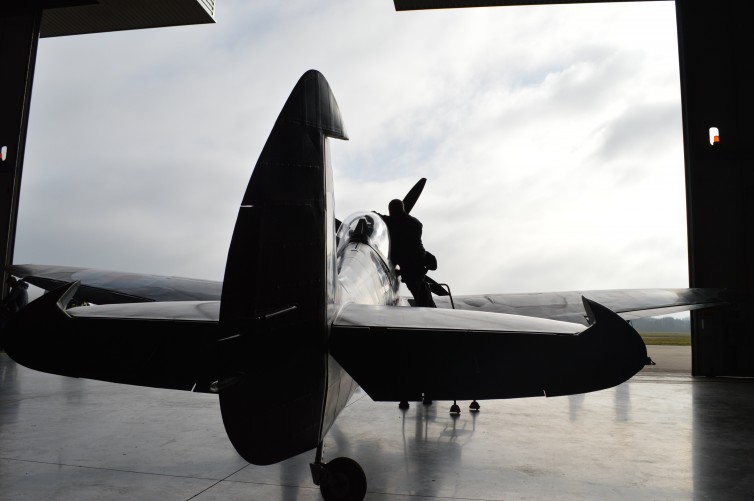 We needed the cloud ceiling to ascend up to 1,500 ft before the Spitfire could get airborne. We were at a frustrating 1,100 ft and had to wait patiently for a change in fortune. In the meantime, we had plenty of opportunity for close up pictures of the military bird. Although the plane was impressive, equally inspiring was listening to 90-year-old Gordon Monger, one of the original Spitfire engineers, talk about his experiences with the plane. 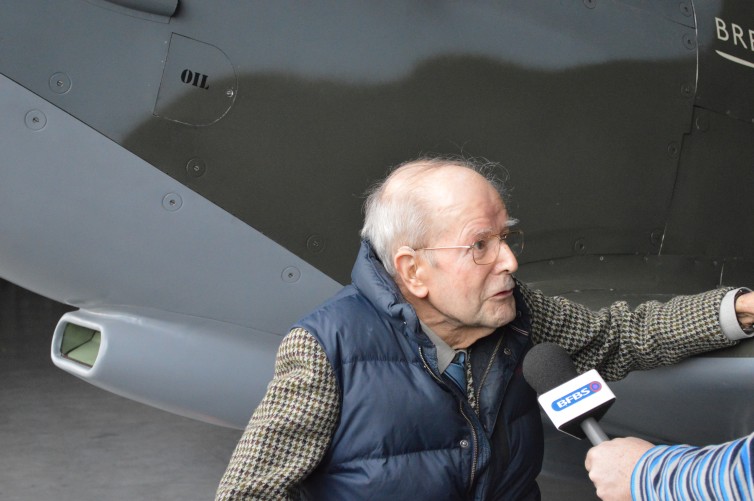 To add some dramatic poise, the hangar doors were closed in preparation for a symbolic unveiling of the fighter and subsequent roll out on to the apron at about 11am. No tow-truck was needed today, as some of the more junior of the Air Cadets, a prestigious organization in its 75th year, had the honor of heaving and hefting the two-ton aircraft several yards forward, then standing to attention for a photo. 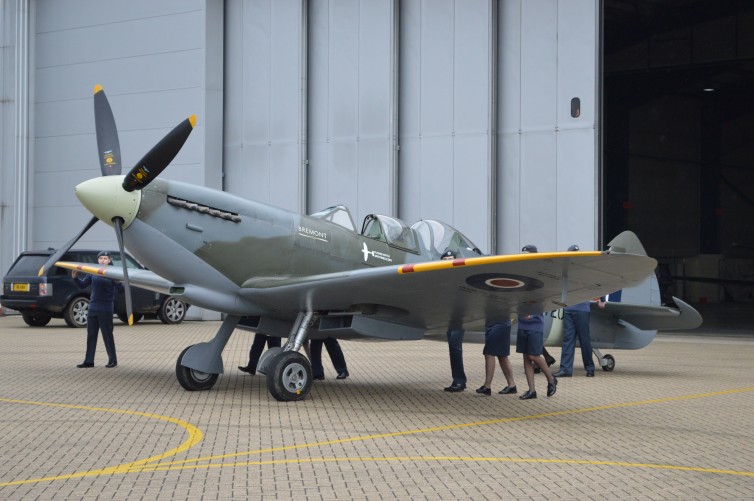 That pesky cloud cover forced a further postponement, and take off was rescheduled to 11:20am. The crowd was excited, but you could tell that the lull in proceedings was frustrating ’“ not that anyone can do anything about it. A select few journalists and photographers prepared for an opportunity to take a few aerial shots from the helicopter parked adjacent to the apron. I had to suppress a smile when one of them asked the pilot whether the helicopter would be making several passes around the Spitfire in flight. ’œNo, mate’ came his reply ’œshe’ll be making several passes around us.’ She might be vintage, but she’s no slouch. 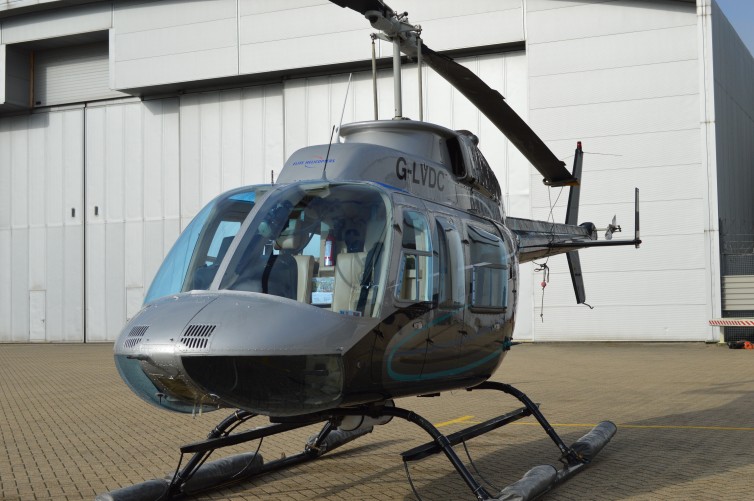 11:20am came and went with no liftoff. But by 11:30am, we had a final briefing in which it was announced that engine start up would commence at 11:45am. The plan was for the aircraft to taxi to the southern end of the SOU runway to begin a 25-minute circuit.

Commercial traffic would come a brief standstill to make way for this historic moment. Sandwiches, muffins, and crisps (potato chips) had arrived and the avid crowd demolished the platters like gannets at feeding time. I had a sarnie or three myself, while I snapped a quick picture of the slightly “rained-on my parade” celebratory cake. Spirits weren’t dampened though as Elise Smith, Vicky Parkes, and Holly Harvey from SOU worked tirelessly to keep everyone and everything in order. 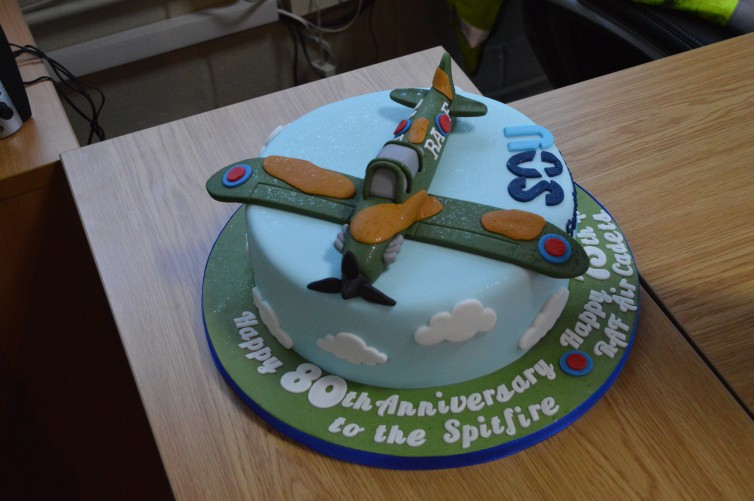 Who doesn’t like an aircraft-themed cake? – Photo: Alastair Long | Airlinereporter

Pilot Matt Jones, who is also the managing director of the Boultbee Flight Academy and co-founder of Flying with Spitfires, jumped into the cockpit and we all scrambled out to wait for the moment the V12 Rolls Royce Merlin engine would belch to life. It did not disappoint. The propellers went into overdrive then Jones brought it down to idle whilst awaiting clearance to taxi. 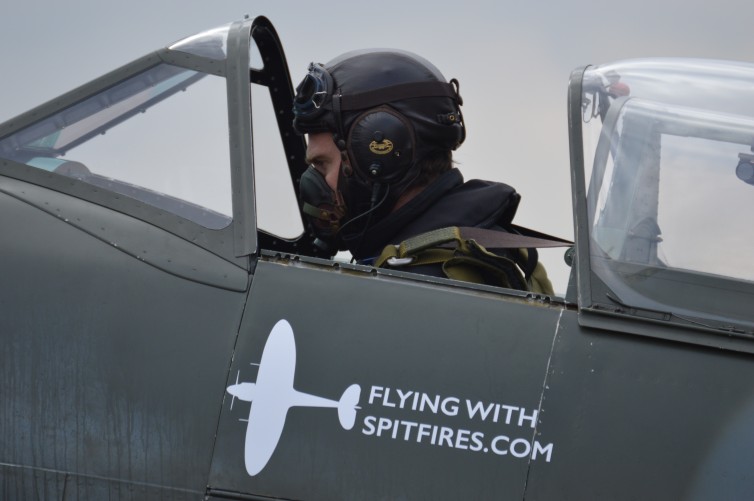 The aircraft that we had stood, sat, and huddled around all morning was remarkably fast — reinforcing the mechanical and technical sophistication of the 80-year-old piece of creative engineering. The Spitfire raced off into the overcast Hampshire sky to complete its momentous flight, reminding us all of its power to inspire. 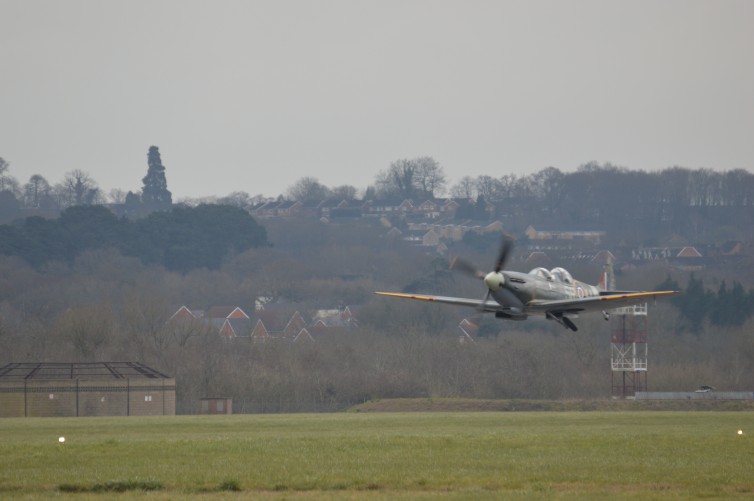 I couldn’t help but notice that I heard the word “inspire” on multiple occasions throughout the day. My 11 year old son harbours an ambition to be a helicopter pilot. I hope that trips like this one will certainly inspire him to do achieve that goal. Even if not, visits to see history getting airborne are the pinnacle of a decent father-and-son day out and a must for us Avgeek big kids.

Thank you for the wonderful story. The Spitfire is one of the most beautiful and inspirational airplanes ever designed, and it is always an airplane we point to when we talk about wing design. Its Rolls Royce Merlin engine is just as legendary. My dad was fifteen years old in 1940 when the RAF flew its Hurricanes and Spitfires against the Luftwaffe during the Battle of Britain. His family is from Southern California and he remembers all of the newsreel footage that showed RAF pilots scrambling to meet the threat. He and others in his Boy Scout troop carved wood models for aircraft identification classes, and his was the Spitfire…I still have his model in my own rather large collection of Spitfires (mostly Corgi’s). I have a beautiful Corgi 1:32 model of the prototype K5054 that I keep in my office. I think those inspirational images of the RAF flying to meet the enemy helped a lot getting my own country (I guess by now you have figured out I am an American) ready to enter the war. My dad joined the Army Air Force and flew the Lockheed Lightning in the pacific, and he had an older brother who flew the B-17 with the 8th Air Force in England. I have yet another uncle who married a girl that lived in London during the Blitz. I was so inspired by Spitfires and Hurricanes and the battle that I made a point of visiting the Battle of Britain Memorial and Air Chief Marshall Dowding’s ashes at Westminster Abbey when I was in London in 1968. Several years back I was doing touch-and-gos at a local airport while airplanes flew in for an airshow, and I had a Spitfire join me in the pattern! That was just about the same as dancing with a pretty woman! I think I went to see the “Battle of Britain” a million times when it first came out just to see all of the Spitfires (and Susannah York).

Good luck to you and your son. If one is inspired to dedicate his life to a passion, there is hardly anything more worthwhile than a life in aviation.

Many thanks Joe. I’m glad you enjoyed the story as much as I enjoyed writing about it! Your experience of the Spitfire vastly overshadows mine, but I certainly share your passion for the classic Battle of Britain film – “You can teach monkeys to fly better than that! Dakker dakker dakker dakker” – priceless flick. Best, Alastair

Alastair…
That is my favorite line in the movie! I think that was Edward Fox and Ian McShane saying it in unison. I was in USAF pilot training shortly after the movie came out, and when my instructor and I were walking to the flight line we saw a bounced landing. Said I in my best English accent…”You can teach MONKEYS to fly better than that”. My instructor almost fell down he laughed so hard. He, too, had seen the movie.
Cheerio…Joe