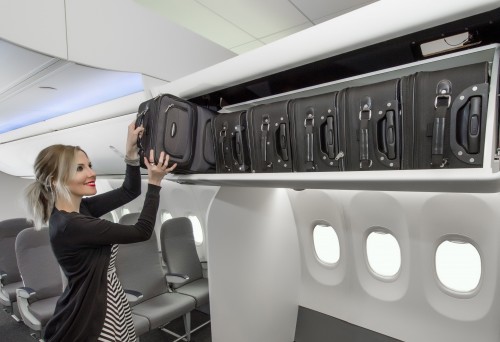 Press release and photo from The Boeing Company:

“We’re taking the Boeing Sky Interior, which is hugely popular with our airline customers and passengers, and building on that success by adding even more room for bags,” said Beverly Wyse, vice president and general manager, 737 program, Boeing Commercial Airplanes. “One of the reasons the 737 is the world’s best selling airplane is because we work with our customers to continuously improve the airplane with features such as Space Bins.”
With a lower bin lip height, Space Bins provide increased visibility into the back of the bins and make bag loading even easier. They’re also as easy to close as the current pivot bins, but require no bin assist mechanism.

Launch customer and hometown partner Alaska Airlines will begin installing Space Bins on all new deliveries as soon as the larger bins become available in late 2015.

“Alaska is committed to making flying a hassle-free and comfortable experience,” said Mark Eliasen, Alaska Airlines treasurer and vice president of finance. “The additional storage space will allow our customers to keep their personal items with them in the cabin, which we think they will enjoy.”
Boeing’s Space Bins will also be available for retrofit on in-service Next-Generation 737s.
Maximum Bag Capacity Based on 737-900ER and 737 MAX 9

If the airlines knocked off the ridiculous baggage fee crap, people would be more inclined to check bags, which would lead to reduced loading/unloading times and would increase the time the birds are in the sky.