9:40 am on a wet and grey Sunday morning in Seattle saw the first flight of an aircraft with a tumultuous history.  This wasn’t a 787 or the A350, this was a Boeing aircraft that has not had much in the way of press in recent times. However, in the past that was a different story.

The first 767-2C, the prototype that will lead to the beginning of the KC-46 program took to the air for the first time.  With it, over 12 years of history will see the USAF’s new tanker project finally start to fly.

The first 767-2C exits the runway in Everett due to a malfunction in the telemetry control. It was able to get back to the planned flight departure a few minutes later.

The first flight of the 767-2C is not technically a KC-46 Pegasus tanker, but the first of four aircraft destined for the testing of this unique aircraft.  A hybrid aircraft of sorts,- made up of the fuselage of a 767-200, the wings of a -300ER, and then throw in the cockpit of Boeing’s latest aircraft, the 787, and you have this almost frankensteinish aircraft that will perform, what some think of as, the most unnatural of airborne feets, refueling other aircraft mid-flight.

Boeing’s history, not only with tankers but with this program alone, could fill page after page.  Let’s try and condense it down, shall we? 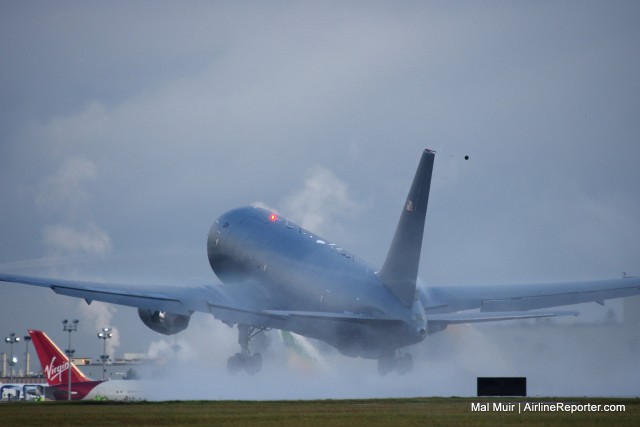 Early Boeing air refueling aircraft were a mixture of modified B-29 and B-50 (an upgraded post-war B-29) bombers, or C97 Stratofreighter converted for the task.  But as the jet age moved forward, aircraft speed increased.  It can be decidedly hard to refuel a jet aircraft when the tanker can’t keep up as it has radial (propellor) engines.

Boeing’s first real decided jet tanker was the KC-135, and was designed based around the Dash 80, the forerunner to the 707.  Boeing’s original designation for the KC-135 was the 717 (later repurposed) as the two aircraft were built almost side-by-side in Seattle.  The first KC-135 Stratotanker (first designed to refuel strategic bombers like the B-52) flew in August of 1956, and has continued to serve with the USAF for almost 60 years (and will make that birthday, and more, with end-of-service not yet set, thanks to re-engining a number of aircraft in the 80s).  But how do you replace an aircraft that has refueled so many generations of aircraft in service with the USAF? 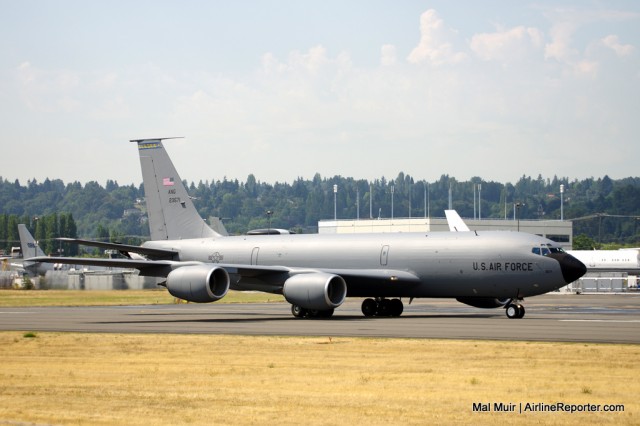 A Boeing KC-135R about to depart Boeing Field. This is the aircraft that will eventually be replaced by the KC-46A.

Now we fast-forward to 2002; the USAF starts to look at replacing their KC-135s and decided to lease 100 aircraft from Boeing.  The aircraft was a modified 767-200, and this is where a lot of people think the original KC-46 came from, but that isn’t true.  The K-767 never entered production for the USAF (Japan and Italy both took four, though) as the program had some blockages by Congress, followed by a lot of back and forth with Congress over whether leasing an aircraft was appropriate for the USAF.

That leasing number changed down to only 20, with the remaining 80 to be purchased.  But then the program ground to a halt while investigations occurred into allegations of impropriety, with a senior member of the acquisitions team going to work for Boeing and apparently negotiating for that position while still working on the KC-767 program bid. WOOPSIE!   The aircraft bid was cancelled in 2006, and then the replacement process started all over again with KC-X program. 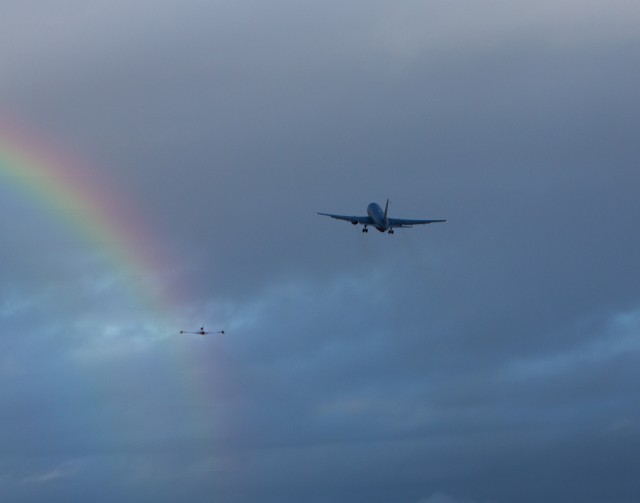 The first 767-2C climbs out of Paine Field accompanied by a T-33 Chase Plane and a Rainbow. Photo: Jennifer Nagle

In 2007, both Boeing and EADS (aka Airbus) began bidding for the KC-X program to fulfill the revised attempt for the USAF to replace aging KC-135s.  Boeing again fielded a version of the 767, while EADs put out a version of its popular A330 (known as the Multi-Role Tanker Transport [MRTT] or KC-30 in some countries).  The aircraft would be designated the KC-45A within the USAF, and in early 2008 the selection went to EADS.  But Boeing wasn’t happy with this, and not two weeks after the announcement, they had filed a formal protest against certain facets of the government’s approval process.

The appeal was upheld and then the aircraft went to bid again in July of 2008.  However, this didn’t last, and by the end of that year, the government had cancelled everything again, deciding to leave it to the new administration in the new year.  So now we move forward again, this time to 2009; the Obama Administration restarts the KC-X bid program.  Boeing is at it again with EADS, and in comes a new company with a US-version of an Antonov aircraft (the AN-112).  However, this time around there is more controversy still, as the Antonov bid is deemed ’œlate’ and thus not able to be considered (it was supposedly five minutes late to submission, though that is disputed by the bidding company).

This time around, Boeing wins the bid and the KC-46 goes to Boeing for four aircraft with an eventual order of 179 aircraft.  The order was announced in early 2011, almost nine years after the original journey started.  But the story isn’t over yet! 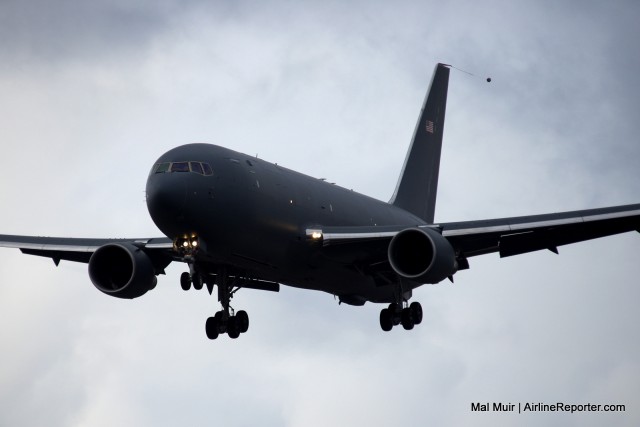 The first 767-2C returns to Boeing Field after roughly 3.5 hours of flight testing over the Pacific Northwest

Fast forward to 2014, as the first of the four aircraft take to the skies from Paine Field.  Up in the air for three hours and 32 minutes, the aircraft underwent testing and eventually landed at Boeing Field.  ’œThe 767-2C performed flawlessly on its initial flight today — no surprises. We took it to 28,000 feet and near max speed, verified aircraft handling characteristics and most of the systems. The entire team should be very proud of how the aircraft performed today. I’m really looking forward to putting the KC-46 program’s test aircraft through their paces as we move further into flight test,’ said Ron Johnston, Boeing Test & Evaluation KC-46 program test pilot.

Technically this aircraft will not be delivered to the Air Force as is.  It is only a 767-2C and lacks the full air refueling setup that a true KC-46 would have.  The 2nd and 3rd aircraft of the test program will be full Pegasus (the name given to the KC-46) aircraft.  The fourth and final test aircraft will be a 767-2C as well, although these two aircraft will eventually get their refuelling equipment and join the Pegasus ranks. 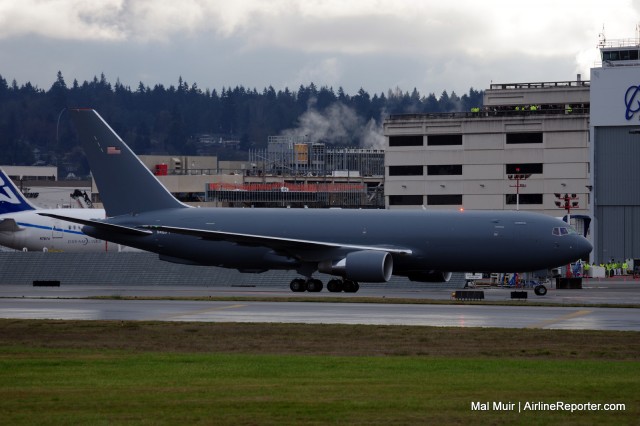 A good look at the 767-2C on the ramp at Boeing Field. At the back of the aircraft below the tail you can see what will eventually become the boom and convert this aircraft to a KC-46A Pegasus.

Although yesterday morning’s flight is the end of what has been a tumultuous, almost 13 years for Boeing to get their newest tanker in the skies, the party isn’t over yet.  The first flight of a full-fledged KC-46 is scheduled for 2015, and the first 18 will be delivered to the Air Force in 2016.

It will be sad to see more of the KC-135s head out to the desert at AMARG, but it is always good to see an aircraft like the 767 continue to live and be produced, an aircraft that doesn’t get the fanfare it deserves as being a true workhorse, day in and day out.

It’s also got “the stabilisers of the 767-400ER” according to this article:

Well I guess it is even more Frankensteinish!

Political considerations aside, would the A330MRTT not have been a better option given that it was an existing design? At least as an interim measure. If it was to be a Boeing, the B777 would have made a better choice, why continue manufacture of an obsolete aircraft?

Graham, that is a good point however it doesn’t take into consideration that the 767 as a tanker was clean sheet back in the early days, the first round. Back then both designs were clean sheet, however when the rejections went through the 767 ended up having 8 built (4 for Japan and 4 for Italy). So in essence the Pegasus is a more modern version of this original K-767A as it is referred to. However when you look at the latest round, yes if they had of decided on the A330MRTT (what can be referred to as the KC-45 or KC-30) they probably would of already had a combat proven aircraft in service. The RAF Voyagers and the RAAF KC-30s are both seeing service right now and doing amazingly.

The KC-46 has turned out to be a bigger “boondoggle” than what the F-35 is (I still like the JSF program, but that’s a whole other story). 12 years from inception to first flight? Considering it was a modification of an existing airliner, it should not have taken that long!

The best of a proven design, with unlimited spare parts and support for many years to come.

This right after QANTAS retired the 767 from its fleet.

And that story is coming later this week 🙂

Excellent. I have a lot of love for the 767, even if I have only been on 3 carriers’ planes (United, Hawaiian, and TAM). I know 7-abreast coach is not optimal from a bean-counting perspective, but those of us in the back enjoy it. 🙂

That is entirely possible, but then you also have to look at the 737 platform that is already created. A replacement for the E3 already exists in the 737 AEW&C aircraft (known as Wedgetail or Peace Eagle) so that may not happen based on a 767 basis, but doesn’t mean it couldn’t in the future.

Japan already operates 767 based AWACS aircraft. The only thing is if the 767 space would be required to operate some of those smaller systems or would the 737 frame work (similar to the P8).

Room for growth? 🙂 But I guess for the USA, the E-10 program has already come and gone and the 737-based platforms are well on their way to success. I am sure someone has done a floor space and generating capacity comparison between the 707/717/737/767 variants.

I was also going to ask about the Colombian Air Force 767 tanker, but it looks like that was an aftermarket conversion by IAI, and Brazil is getting some of these, too.

Can an ex RAF bloke add a few comments please?
From this side of the Pond this whole process seems to demonstrate why a) the US Taxpayer gets shafted every time b) its a waste of time for any foreign manufacturer to bid for US military aircraft. Protectionism is a way of life in the USA and while its great to note the only three ‘foreign’ aircraft have been British (Canberra, Harrier and Hawk) they were built under licence in the USA.

What this debacle showed is that Airbus / Northrop won fair and square, Boeing called in political favours from Senators and they carried out a political hatchet job. And the sad thing is that Mobile lost out on a new aircraft factory and thousands of new jobs, Washington State gained none and the USAF will get (whenever) a smaller, less efficient tanker than was on offer at less cost. But at least Airbus kept its promise and the new A320 FAL is nearly ready in Mobile. My old mob have had all their A330 MRTT Voyagers in service on time and to budget for some time now. As someone else said: “12 years!”.. really?