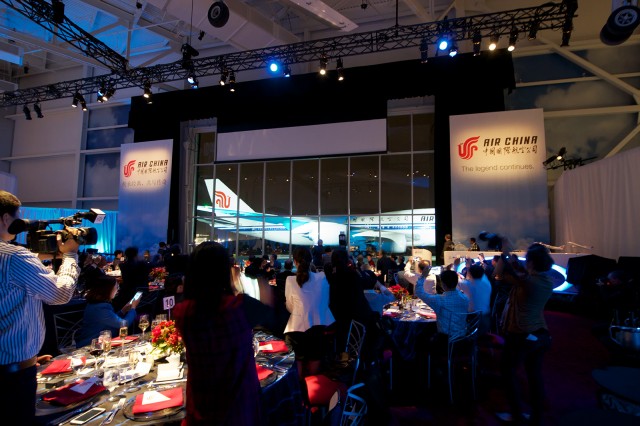 The view of Air China’s first 747-8I from the Future of Flight Center – Photo: Bernie Leighton | AirlineReporter

We know that there will be a total of 366 seats on the new 748I in a four-cabin configuration.  Unfortunately, not even a rendering existed of the cabin – and we were not allowed on board to see it for ourselves. Even when asking the airline, they weren’t too straightforward with what the interior will look like.

The airline has stated that their first 747-8I will start commercial service on October 11. The airline will commence with domestic flights at first, then with long-haul flights from Beijing to Frankfurt are expected to begin later in the year. 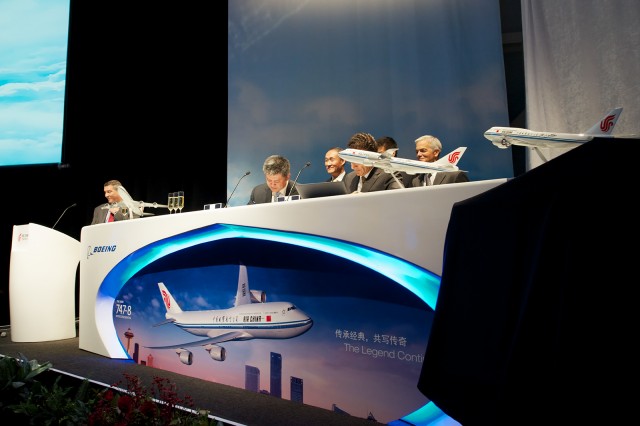 At the delivery ceremony, the theme was stated to be “the legend continues.” That is to say, the legend of the 747. But with such a forward-looking theme, more time was actually spent on discussing Air China’s past 747 use.

There was more focus put on the fact that Chinese airlines have accepted more than 800 Boeing aircraft than the fact that Air China was the second 747-8 passenger operator. They are also, of course, the first ones in Asia.

“Air China has been operating 747s since the 1980s,” said Song Zhiyong, president of Air China. “This iconic airplane has played an important role in Air China’s international development and has also witnessed many milestones of the reform and opening-up of China. We are very proud to introduce the new 747-8 into our fleet to continue its tradition into the future.”

For an event with Joe Sutter (“father” of the 747) present, one would have expected the delivery ceremony to feel like the beginning of a new era. Instead, it felt like a memorial for the 747. With so much focus on the fact that Air China has (since the CAAC days) been operating the 747 for 35 years, it felt like all the discussion of present and future 747 operations was done grudgingly. It almost seemed like they were more pleased to announce that their 747-400s would be leaving the fleet by 2015. 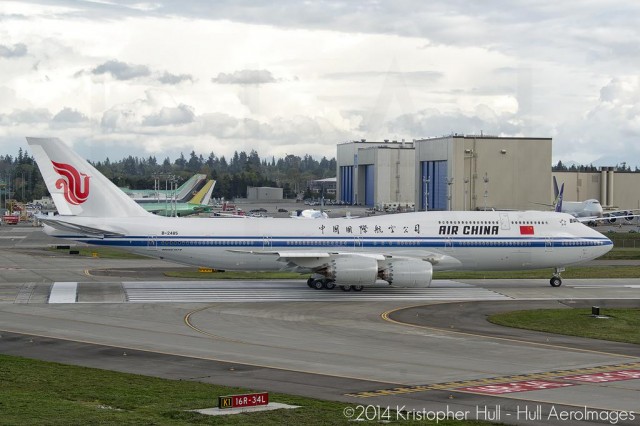 There was a distinct lack of focus on the aircraft. In fact, for most of the ceremony, the aircraft remained behind curtains and windows. We were not ushered outside to take pictures; all of the video produced for the ceremony included renderings or previous footage of other Air China or CAAC aircraft.

It is unusual for an airline to seem so subdued and unenthusiastic about an airframe at its own delivery ceremony. It is something I have never seen before. Even in speaking with the marketing director of the airline – the most enthusiasm the collective group of reporters could muster was a “we made the right choice.”

There are too many lines to read between here.

Regardless, congratulations to Air China on becoming the second 747-8I operator. We hope to learn more about the aircraft prior to its entry in service.

I don’t think you understand the Chinese culture. The people there do not sing praise of things easily and over enthusiastically like Westerners or Americans do.

If you hear a Chinese say “good”, it’s really equivalent to when an American utters “excellent” or “awesome”.

I think you might partially be right. But we had China Eastern celebrate their 777-300ER a few days earlier and it seems that China Airlines is pretty excited to get theirs later this week!

Even when Air China placed the order for their 747-8’s, it was very muted. I had the distinct feeling that it was an aircraft they didn’t really want but had to have because it was a deal done between the US and Chinese Governments. At the time they already had 12 B773ER’s (now 18) and since ordered more plus 15 B787-9’s.

Actually Airchina has 20 B773ERs. To some degree, as you mentioned, the order of B747 is out of the will between the two Goverments, otherwise who would like afford the consumption of a four-engine aircraft, though B747-8I is much more energe-saving than old ones.

The marketing style is very different. The oft quoted “Americans have forgotten more about advertising than the rest of the world will ever learn” couldn’t be truer in this case. Still, the delivery was made on the 46th anniversary of the unveiling of the very first 747, this model was a considerable upgrade bringing it in line with today’s most efficient planes, and at the same time, the 747-8i really represents something of a low risk investment in the VLA sector, albeit, the 747-8i does a bit more than the 777-300ER, and will be challenged by the 777-9. Also, if one looks at the China Southern A380 operations – there are none from its main base to Europe. Chinese airlines’ orders have made in a quota/ration style to the two main manufacturers by a Chinese agency handling these affairs.

Great pic on the top of the page Bernie!

Great paper on Air China. As the rumor goes on, Air China will be pleased to operate a 747-81 in 2015 when launching its new direct route Beijing-Montreal.