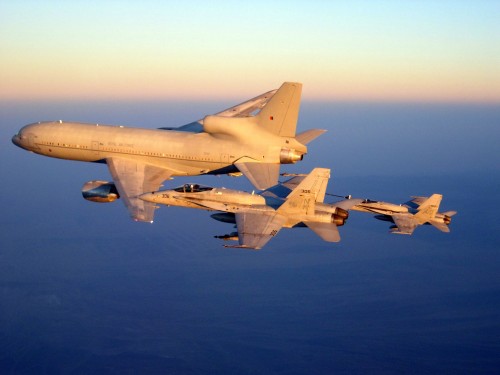 An F/A-18C Hornet aircraft assigned to Strike Fighter Squadron 113 holds in the port observation position on a British Royal Air Force L-1011 tanker aircraft as another Hornet assigned to Carrier Air Wing (CVW) 14 takes on fuel from the tanker over Southern Afghanistan Oct. 9, 2008. CVW-14 is embarked aboard the Nimitz-class aircraft carrier USS Ronald Reagan (CVN 76). The carrier strike group, which is deployed to the U.S. 5th Fleet area of responsibility, is providing support to coalition forces on the ground in Afghanistan. (DoD photo by Cmdr. Erik Etz, U.S. Navy/Released)